These are stories I cannot write myself for various reasons, but I wanted to share the ideas with all of you, throw them out into the zeitgeist, make them available for discourse, because I think they could be quite profound.  Either I’ve done them to death in other places, they’re just too much for me to handle, or I’m being lazy and just want to read such plots without putting the work in so here you go.

A fallen angel becomes a guardian angel in order to atone for that which made him fallen in the first place.  This premise is similar to Northern Lights, but with original characters and the main focus of the tale.

I really can’t believe that I’ve never found this type of story before.  It seems like a veritable goldmine of romance and religious symbolism tropes.  If any of you know of any stories like this, please let me know as I would love to read that.

Essentially the foundation of my FFVII Aeriseph fanfics (see again Northern Lights). In a previous life the guy kills the girl and remembers it in the next. Feels he must spend the new life making it up to her, while the girl is forgiving to his penitence.  Possibly neither quite remembers or only he really remembers.  It’ also possible that he’s remembering it wrong and doesn’t quite have access to all of the information that goaded him into the terrible act.  The climax of the story could be them finding out the real truth and defeating the very cause of what occurred in the last life.  This could also be tied together with the above writing prompt.

A guy ends up falling in love with a girl who looks exactly like his birth mother but isn’t related to him.  He’s adopted and has never seen/met his birth mother. What would ensue from this? Would the guy/girl stay together. Is this weird/strange/freaky/disturbing? Is there a real world precedence for it?

This was partially inspired by the Family Guy episode Tom Tucker: The Man and His Dream where Chris dates a girl who looks exactly like Lois. 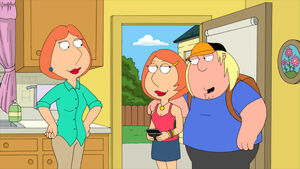 But I also can’t deny the FFVII influence for this one, too since Lucrecia (Sephiroth’s real mother) looks a great deal like Aeris, though I guess that should be reversed since Lu is obviously older.

While I don’t think Lucrecia has green eyes like Aeris (that’s the artist interpretation), the hair is a dead match, and I’ve seen other pictures of Lu that prove it as well.  They are both quintessential mother figures, but I don’t want to get into a lot of theorizing here.  I’ll save that for my essays.  My point is I would be highly interested in a story like that, but I again run into the wall that I’m pretty much already doing that in NL.

I…think all of these writing prompts are pretty much ideas that budded off of Northern Lights while I was in the process of penning that tale.  I wanted to share them all with you in hopes to either inspire or plead for you to give me some ideas of where plot lines like this could be found.  My desire to write generally grows out of not being able to find such stories anywhere else.  If they already exist, then my (non) work is done!