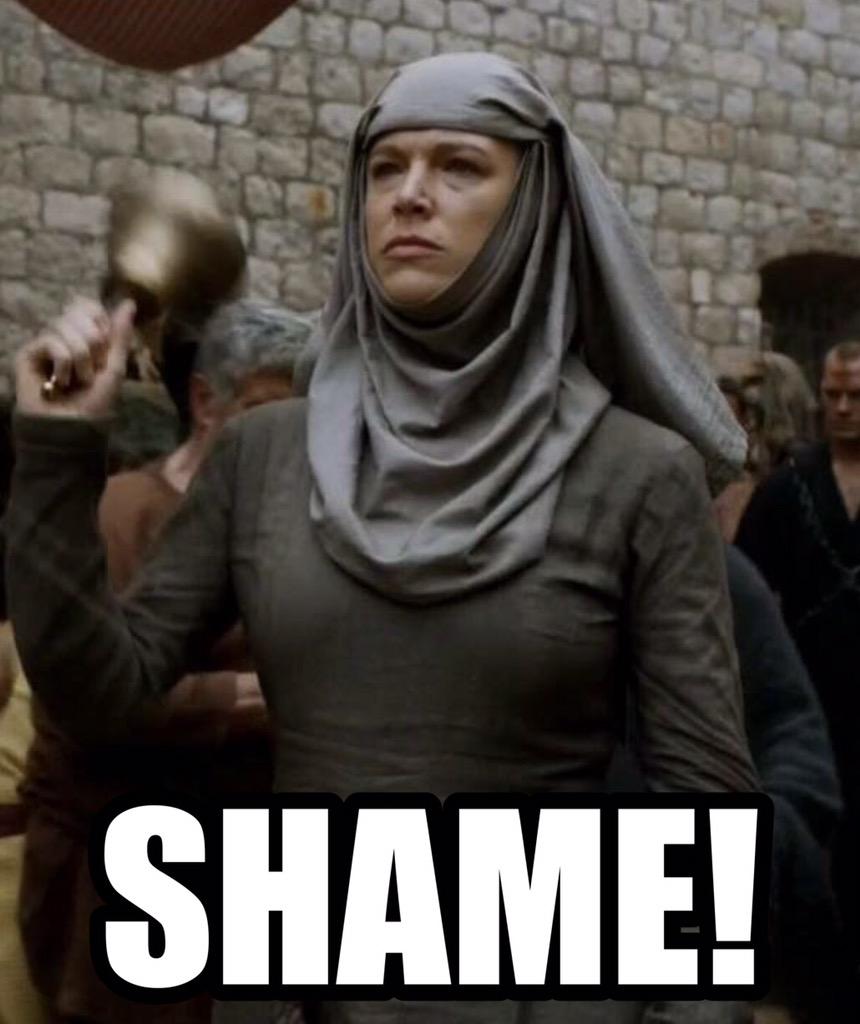 This seems like my annoying pattern, but a less annoying pattern is my starting with a grandiose concept prior to my edit.  I’m greatly enjoying that.  I’ve been talking about ASOIAF and Paradise Lost for days, and that I truly of adore  I hope you haven’t grown tired of my babble dear readers.  If you haven’t I love you so.

I have in my tumultuous brain a particular head canon when it comes to angels and angel tropes.  This concept is also known as fanon and is highly up for interpretation, debate, and change.  Before I get into this I just need to segue for a moment.

Alright so my angel head canon.  First it’s funny how most people generally picture Precious Moments Angels (and NO I’m not putting a link to that) when they hear the word.  I’m here to tell you that those fucking things are creepy as hell.  I’d rather deal with weeping angels any day of the week than those *shivers*  They’re…just…terrible with their soulless eyes and their (almost) no-mouth faces and how they try to suck you in with their presumed innocence.  Also they’re totally wrong.  If you’ve read the Bible, (which I’ll admit I haven’t fully.  I’ve read Revelations since I kinda had to to write my FFVII Revelations piece), then you realize that angels are actually warriors for god.  They’re way more akin to this:

Or we can just quote Castiel from Supernatural, another show I need to watch.  I found this on the Our Angels Are Different TV Tropes page (same link attached to “angel tropes” above) and saw this piece of wisdom there:

Dean: I thought angels were supposed to be guardians. Fluffy wings, halos — You know, Michael Landon. Not dicks.
Castiel: Read the Bible. Angels are warriors of God. I’m a soldier.

Wait…angels are soldiers?  Omg, no no no, I am NOT going there.  Not right now.  I don’t care that Shinra means/implies “dark god” or “god catch” or something to do with “god” (it’s the “ra” part.  Think Egypt).  I don’t care that they essentially had their corporate army of super soldiers who sprouted wings.  No, no, nope.  We are not going that today.  Oh God…we just did, didn’t we?

So my angel head canon is this.   I’ve written about dark and now fallen angels.  I haven’t done much if anything with the angels within the nine choirs.  I almost, almost made my one MC character a dark seraph, but that would just have been too many wings to keep track of.  Also dark seraph is a bit of an oxymoron, since seraphim are literally made of light.  Hm, if you think about it, Sephiroth’s final form looks a bit like a dark seraph, doesn’t it?  I bet if I google dark seraph I’ll get something similar if not him.  Let’s do it.  Let’s google dark seraph!

I was not disappointed.

Dark angels aren’t evil.  They are dark because they disobeyed God or the gods’ commands, rebellious in that way, but not trying to overthrow the throne.  It comes back to free will.  Dark angels decided for a noble purpose to essentially say, “Fuck you,” to God’s rules because it went against what they believed say for example if their entire raison d’être was to protect the innocent.  Let’s say that that’s all a particular dark angel cares about: protecting the innocent, defending the weak and the pure (which is what my paranormal romance The Serpent’s Tale is about).  Well sometimes in God’s plan the innocent need to die, well this angel doesn’t accept that, and he’ll stop at nothing to protect them.  Now, if he was created for that purpose by God, is he really rebelling against him?  It’s the same question I asked about Lucifer in Paradise Lost.  If God is all knowing and all seeing then wouldn’t he have seen that his creation was going to rebel against him?  Wasn’t he designed for that purpose?  You gave him free will.

I see this same paradigm in FFVII.  Sephiroth hates his father (with totally understandable cause).  Hojo is a not only a dick, he’s a fucking psychopath and the story’s only complete monster.  He doesn’t care about anything except for his experiments, sees people as merely subjects for his depraved tests.  I’m unsure if Sephiroth knows that he’s his father in the game, and I’ve read a number of fanfics where he finds out and is beyond disgusted, disturbed, and down right ashamed.  Seriously, their situation makes me think of that fucked up movie, what the hell was it…Splice!!!  (Ah props to my friend Matthew for dropping the knowledge), and is extremely disdainful of the company in general.  Ironically, he has tons of respect for the work of Aeris’s father Gast (huh, I always assumed that was his last name), but prior to going to Nibelheim, he made it clear it was going to be his last mission.  Of course things never go according to plan and instead he’s led down the path of insanity and false apotheosis, but going back to my dark angel, he would never fall for this path.  He has no desire to be a god, because not only is he disdainful of them, if he becomes one of them, he’d be the thing he hates the most.  Being only a thread in the tapestry and not the tapestry itself means you have the luxury to unravel, but if he were to become a god, he would see the situations where the innocent needed to die, and that would be too much for him to bear.  Being an angel means that he can be a dissenter and walk away flipping God the bird.  I can actually see this in my mind, the beautiful dark angel with his huge black wings whirling away from the throne of deity, while the Almighty kind shakes his head with a smile, because having a creation like that isn’t wholly irksome and is really just part of the plan.

Goddamn I go off on tangents…the point I want to make is that dark angels still have generally angelic features.  They have wings albeit black and halos.  The halo is warm colored (gold, red, orange, etc.).  Their hair is black and their skin is pale, but of course they’re insanely beautiful.  They’re still within God’s good graces and are essentially allowed a sort of free reign so long as they don’t overstep.  They tend to be given the jobs that ordinary angels wouldn’t do, the “dirtier” work per se, dirtier meaning that there’s more blood involved.

Now fallen angels have…well fallen out of God’s graces.  Lucifer would be the best example of this.  I picture the fallen as having broken, torn, or (obviously) one wing.  No halo or maybe a cool colored halo (blue, purple, green, etc.).  They still look angelic, but fallen is one step away from being demonic.  You know…angels and eldritch abominations aren’t really that far apart if you think about it.  Renaissance artists depicted them in watered down form in a way the human mind could comprehend, understand, or not be shut down by.  An angel’s true form is probably something too terrible for you to conceive.  Now the artists, too, are human and they needed a way to show that this being was something more than human, a form you’re comfortable with otherwise you go insane (see the Cetra’s reaction to Jenova in FFVII or anything Lovecraft).  Even just thinking about it could drive you mad.  The universe is not your friend.  It is a dark, bottomless void empty of sympathy or even reason, and the things that slink through the star-gone darkness will melt your meager mind…

Well!  With that morbid meandering now that it’s now time to reread Chapter 2 and fix any foibles I might find.

This is actually a really short chapter.

“He shut his eyes fully and tight before looking up to the foundation above.”  Meta-reference much?  Don’t worry…there will be plenty more.

The Planet itself echoes his words, “Be still.”  (Sorry if I already mentioned this yesterday.)  Essentially telling her to calm down.  It’s okay.  You don’t understand what’s going on, but it’s going to be okay.  Trust me.  She’s told, “Be still,” three times.

Despite her terror Aeris is still checking him out, and that’s kind of hysterical.  He is very beautiful, and she can’t help but notice it.  Aaaaaand she checks him out again after he comes back.

She only moves when he stops looking at her, a sort of reverse weeping angel paradigm.

She does eventually thank him.  They’re both super polite.

Not too shabby.  The first two chapters are super short though.  Chapter 3 is quite a bit longer.  Will attempt to start it tonight after more ASOIAF video viewing, which means I’ll probably have more esoteric knowledge and comparative narrative writing to do.  S’okay though.  This is what I live for.  I have no clue how I’m going to keep up this pace once I go back to work (I won’t be able to), but I will do my best.  Huh, I just starting thinking about Christmas for some reason and got a little light in my heart.  Random information: I LOVE Christmas.  I’m kind of a Christmas goth, and once I realized the Christmas season was officially called Advent it just made me love it harder.

Farewell for now gentle readers.  Go with grace until we meet again.