I’ll be honest up front; me and my fellow fangirl Amanda (who writes for Nerd-Base) really only saw this because our fictional husband (one of our many, not all the same) Tom Hiddleston was in it.  You may remember him from a little film called Avengers where he played the sexiest God of Mischief ever, Loki.

Seriously, who could forget this?

We planned this six months in advance and went yesterday.  Neither of us had any idea what the movie was even about.  We just knew it was Tom looking sexy and dark doing dark, sexy things.  I knew it was directed by Guillermo del Toro who has also done such fantastic films as Hellboy I and II, Pan’s Labyrinth, and Pacific Rim, which I don’t detest as much as some.  While I generally like movies with more depth, PR gave you exactly what you’d expect from a story about robots fighting giant monsters, and it had Idris Elba who’s fantastic.  Going back to the flick at hand, I knew regardless of anything else, the cinematography would be amazing, because del Toro does nothing involved with that by halves.

Del Toro’s skill with color scheme and vibrancy is unrivaled

Crimson Peak is a horror/Gothic romance film according to the Wikipedia description.  I consider it more of a suspense thriller and while there is a romantic element, *spoiler* of sorts…actually, the “romantic element” is the catalyst for the entire tale, but we’ll get to that later *end spoiler* that is quickly lost as the main focus of the film, which becomes the ubiquitous and easily relatable fight for survival.

Like all good heroines, Edith’s mother died when she was young, but though there was a closed casket funeral, it was not the last time our young protagonist saw her matron as Edith experienced a terrifying encounter with her ghost, which warned her daughter to “Beware of Crimson Peak.”

It is uncertain whether or not Edith’s ability to perceive the dead prompted her to write ghost stories, but she is astute enough in reality to realize her publisher wishes her to include a romantic element (more than likely) because she’s a woman.  The Victorian society she is part of has its fair portion of “mean girls,” and Edith is not really embraced by the ladies of her time who mock her occupation as merely a “hobby” and derisively refer to her as “Jane Austen,” but she is mostly undaunted and continues to pursue her dream.

As for dreams that is the reason for Sir Thomas Sharpe’s sojourn in the states.  He is an inventor without the capital to fund his idea, a machine that will allow for better clay extraction from the earth beneath his manor home in Cumberland, England.  As Carson Cushing discovers, America is not the first or even the second place Sharpe has gone seeking patronage.  He’s been all over the world before finding himself on the Cushing’s doorstep, but unfortunately for the baronet, he finds no support there.  The industrialist doesn’t trust him and certainly is displeased when he begins to take up with his only daughter and child Edith.

Carson hires a private detective to dig up the dirt (ha) on Sir Thomas.  He is less than impressed by what he finds, which ironically gives him a reason to furnish him some of the financial backing Sharpe was seeking with the condition that he and his sister, Lucille, leave the country AND Sharpe thoroughly breaks his daughter’s heart…which he does in the most painful way possible if you happen to be a writer.

After seemingly granting her father’s wishes and leaving Edith in tears, Sir Thomas departs, but he sends her a note the next day explaining why he had to do what he did and promising to return for her.  Edith manages to find him before it’s too late, and later when *spoiler* her father is mysteriously and brutally murdered, he comforts her and *end spoiler* persuades the young novelist to marry him.

They return to England and Allerdale Hall, the Sharpe’s crumbling estate.

Behold the dilapidation of 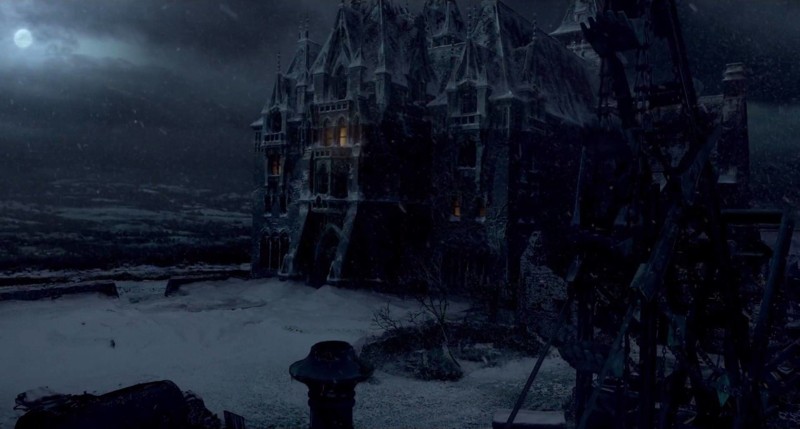 The air of darkness and mystery is apparent the moment Edith arrives.  Lucille retains her aloof disdain for her brother’s new wife, and Edith begins to have visions of terrifying ghostly figures that chase her throughout the house.

I shall not spoil the rest of this movie; what is given should be enough to…”peak” your curiosity..  It is not the typical ghost story, though, for they themselves are more haunted than haunting.  The entire film there is an overwhelming sense of “not right” that is highly precipitated by Lucille.  Her cold disdain of Edith seems far more than just an aristocrat looking down her nose at someone she deems unworthy (though…again that is the case *major spoiler* This revelation just came to me, but Edith’s father initially rejects Sir Thomas because he doesn’t believe he is good enough for his daughter, and Lucille rejects Edith because she believes the same thing about the young woman and her brother, because only Lucille is good enough for him in her twisted head *end spoiler*.  There’s clearly more to it than that else why would Edith have received not one but two warnings from her dead mother to beware of Crimson Peak, though we don’t find out what that means until Edith is mostly established in Allerdale Hall.

The film was far less supernatural than it lets on, which is not a criticism on my part.  I find it brilliant that it upheld the ruse for as long as it did.  From the trailers and far into the narrative, you are led to believe the Sharpe siblings are retaining some supernatural secret, *spoiler* but the truth is far more mundane and disturbing.  If you’re a Game of Thrones/ASOIAF fan, you will not be overly shaken by the revelation. *end spoiler*  It’s funny how familiarity can desensitize you to things abominable.

It need not be said that the acting in this film is impeccable, and *spoiler* I was overjoyed that Tom played a character who gets a redemption arc.  I love redemption stories as many of you well know, and *end spoiler* many people considered his role as Thomas Sharpe as a more Gothic version of Loki. Mia Wasikowski is excellent as Edith who doesn’t fall wholly into the stereotypical role of “damsel in distress.”  *spoiler* In fact the final showdown is between Edith and Lucille, the two main female characters.  McMichael does attempt to come to Edith’s rescue as the handsome doctor character should, but as we’re shown in the stabbing scene, it’s Lucille who is truly running the show. *end spoiler*  Even during her most dire straits, Edith does what she needs in order to not only survive but be a rescuer herself.  The film also passes the Bechdel Test I believe.  Please correct me if I’m wrong, but I don’t think the two women talking about a man at any point fails it.  It just can’t be the only thing they talk about.  I’m a bit impressed that a film set in this era manages to not only accomplish this, but have the protagonist show so much agency especially when she is the picture of “feminine innocence.”

Blonde AND dressed all in white. The epitome of “the maiden in the woods.”

So while I was not surprised by the shocking twist at the end (for reasons I explained in spoiler), I was still very impressed with del Toro’s latest effort, and not just because my Tom was in it.  Oh, and for your Hiddles lovers, you get to see his perfect ass.

I’m not usually into butts, but I”ll make an exception for him.  This actually leads me to another point in the movie’s favor as sex scenes usually exploit female nudity, but we actually see neither Wasikoswki nor Chastain in the buff, something I find amazing due to the above scene with the former, and before anyone tries to say how unfair this is, please think of how often we see frontal nudity on women as compared to men.  When it’s even and/or we start to see the pendulum swinging the other way, then we’ll talk.

I highly recommend this film.  I am not into horror in the least and haven’t been since I saw The Ring in college.  To put it bluntly I’m a wuss puss who is easily terrified by anything horror related especially the supernatural/paranormal, but Crimson Peak manifests as more thriller than horror.  There are jump points and quite a lot of gore/visually disturbing scenes (the butterflies, oh my God, the butterflies), but this shouldn’t leave anyone old enough to see the film with any nightmares.

I’d give Crimson Peak 4 stars out of 5, and I’ll probably see it again.  I think I’ll pick up more in knowing what’s to come.