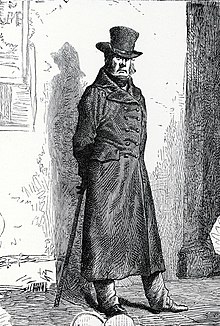 Javert is the main antagonist of Victor Hugo’s classic novel Les Misérable.  Born in a  prison, it is very likely this mean beginning that shapes his life’s perspective.  He becomes a police inspector and has an absolute and unshakable belief in the law.  It is firm, resolute, and cannot be bent or mocked, a rock to cling to in the turbulent sea of a chaotic world.  This is his fervor and his zeal, and it is the reason he becomes Jean Valjean’s adversary.

To Javert good is good and evil is evil.  If you are a good man you will remain so until you commit some sin or crime and then you will become evil.  “Once a thief forever a thief” is his mantra and he holds to it like a terrier would a rat.  People do not change once they traverse the path of evil.  There is no redemption; there is no awakening.  “If you fall like Lucifer fell, you fall in flames.”

It is this absolutism that leads to Javert’s own downfall.  He cannot accept that Valean, a criminal, would let him go when he (Valjean) had the opportunity to kill and be free of the inspector forever.  This act of mercy cost Javert his life, because he cannot fathom that a convict could find redemption and become a good man, but Valjean has and does.  In Javert’s rigid world there is room for no colors, only black and white.  Valjean is either “from heaven or from hell,” and as the inspector had him slotted for the latter, he cannot accept that such a man could do selfless good.  Thus is the dark side of absolutism.  The whole idea offsets his version of how the world works, and it “cannot hold.”  Valjean’s act of mercy cannot be tolerated because Javert cannot fit it into his world view.  He has no choice but to commit suicide because a reality where criminals can be good men makes no sense.  The inspector cannot bend; he can only break  He believed for twenty years that Valjean was nothing but the scum of the earth, but it is Javert who must fall in the end.

The inspector is an ironic villain/antagonist as Valjean is truly guilty of breaking his parole; however our world need not be so colorless as Javert’s.  Valjean’s treatment as a convict was unjust in its portrayal of justice as was Fantine’s abuse as a prostitute.  Laws are created by men and are not absolutes handed down by some benevolent authority, and as men are fallible so can laws be.  Javert was clinging to a false ideal, false insofar as humanity and not some pure absolute was its source.  Laws are made by men and can be used to enslave and entrap; therefore they cannot be held to an unquestionable standard.

It is hard to fault Javert as he was born in a situation where obeying the rules handed down by the powers that be would save him from the lowness of his birth.  His persistence, no matter how misguided, is still admirable; however, to doggedly follow anything without question is a type of slavery that those very powers would love to disseminate.  A populace that neither thinks nor questions is shaped to be controlled, and it is characters like Javert that show us in inverse how dangerous such a thought prison can be.