It is unfortunate that this is one of the only books I’ve managed to read this year, a mid-grade YA fantasy novel of 300 pages, and it still took more more than a month.   I wish I could just accept the fact that it’s due to being short of time instead of doubting my intelligence, but I still beat myself up. 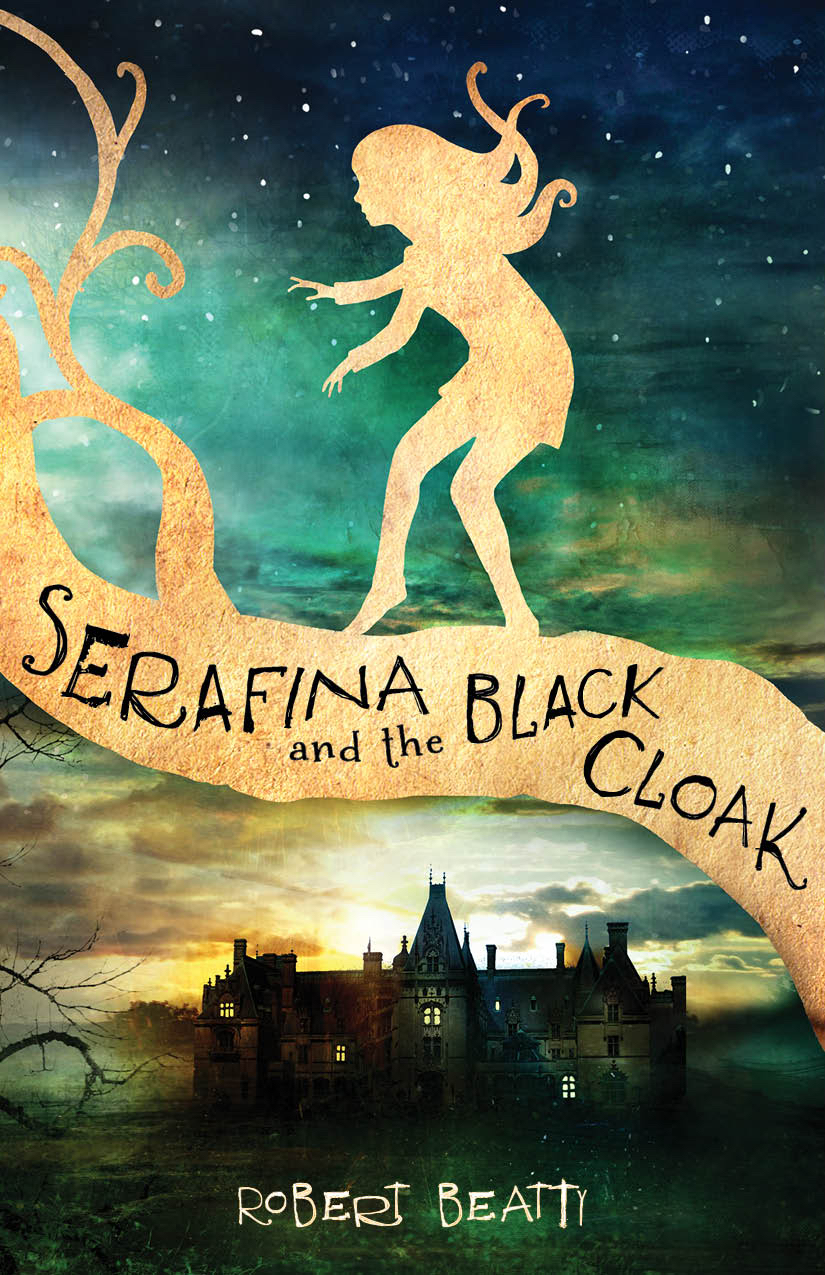 Serafina and the Black Cloak is the debut novel by author Robert Beatty.  The story is set in the real life Biltmore Estate, the largest privately owned house in American, in Asheville, NC set against the backdrop of the Blue Ridge Mountains, which is where Beatty himself resides (Ashville not Biltmore).  The novel’s heroine, Serafina, is an extraordinary little girl who lives in the basement of the Vanderbilt’s estate with her Pa, the mansions mechanic.  No one knows about her existence let alone her all important task of Biltmore’s C.R.C, Chief Rat Catcher, and catch rats she does large and small every night.  She can creep about in silence and see in perfect dark, which makes her wonder about her true origins and nature.  Her life and Biltmore’s sanctity is upturned with the appearance of the Man in the Black Cloak, a sinister figure with glowing eyes that haunts the darkened halls of Biltmore snatching children for reasons most foul.  Serafina has to not only defy her father’s wishes, but also possibly make her existence known to at least one Biltmore resident for though she is very clever and resourceful, the Man in the Black Cloak may even be too much for her not quite human abilities.

Let me first be honest.  We all know I decided to read this book because of the “Man in the Black Cloak” description.  If you ever want to get me to read, watch, or play something, just tell me it has some similar paradigm to FFVII (that’s why I read ASOIAF, which I mention ad nauseum).  I’m fairly certain “man in black ‘optional garment'” is synonymous with Satan/Lucifer or one of the euphemisms for him.  The name “Serafina” comes from seraphim, which are the highest order of angels nor does Sera disappoint.  She knows she’s different from “ordinary” humans somehow *spoiler* and she finally coaxes her “father” to reveal her origins, *end spoiler* and though she’s not sure whether she was created for good or created for evil, she decides to be a force for the first.

It’s very obvious from the start that Sera is fae in some sort of way (unintended rhyme), and in truth this story is pretty predictable but I say that from the “lofty” position of adulthood.  Serafina was written for the mid-grade YA level, and, taking that into account, the clues and hints are not as obvious.  When you’re experienced at picking up the nuances from more advanced literature, certain things will be obvious to you (though even I in my old, curmudgeonly state was still quite shocked by the end of Harry Potter and the Sorcerer’s Stone).  I think this book is an excellent introduction to showing a younger reader how to figure out what an author is saying before the author says it, and on reread they could have their “Ahhh” moments.  *spoiler* The fact that the climax involves Sera slicing up the Black Cloak on the sword of an angel statue is a nice plethora of symbolism for older readers and nice meta, too due to the fore mentioned origins of her name.  *end spoiler*

The ending is very satisfactory and even before knowing there was a sequel, I could tell that one was being set up.  *spoiler*  Granted again it was very obvious that Sera was some type of cat.  It was heavily hinted in the beginning with her description, and there was one scene where she really wanted to push chess pieces to the floor.  There are even more obvious clues to this aspect of her nature, but exactly how it’s possible isn’t shown until the end.  *end spoiler*   I love that this is a tale about a little girl who is entirely the heroine of the narrative.  While she does have help, it is Serafina who ultimately makes the hard decisions to do what needs to be done.  Beatty has three daughters and expressed the desire to write something about an unusual and heroic little girl.  She’s not particularly stereotypical either.  Her unusual and “tomboy” nature don’t come out of the desire to be different; she just is.  She has no direct interaction with any other children and is merely an observer on the edges wishing to touch to fringe.

I went back and forth on whether I’d give Serafina three or four stars.  The predictability pulled it down a bit for me.  Older readers will quickly know who the villain is and be able to divine Serafina’s true nature not more than halfway through, but for the younger demographic it’s written for, it does an excellent job showing bravery under great duress and resourcefulness when you have little more than a wing and prayer.