It’s been a long time since a video game ending made me cry.  The focus of this review will be on the story, though I’ll discuss gameplay briefly.  If you are looking for a comprehensive review of all the elements as I do with my Final Fantasy reviews, I apologize to let you down.

I only played Super Paper Mario up to Chapter 4 before I put it aside for other projects.  I liked the game, but wasn’t that fond of the gameplay.  I don’t like action RPGs (which is going to be a HUGE problem for me in the future since that’s the future of RPGs, and in fact I think the FFVII Remake is going to be one *seethes* but this is not the time nor place to gripe about that) and much prefer turn based, so that was a major point against SPM from the start, but the story was compelling, and that’s why it stayed in my head long after I’d given up playing the game..

I only decided to write this upon seeing the ending so perhaps this is more of an examination of a particular aspect of the narrative rather than a proper review, and of course since it’s the ending I’m concerned with, I must warn you with a:

Luigi, Princess Peach, and Bowser are kidnapped by Count Bleck, the game’s main antagonist (much more on that later), who controls a book of power called the Dark Prognosticus.  Using the hypnotic powers of his ally Nastasia, he forces Princess Peach and Bowser to marry (to the delight of the latter of course), which summons the Chaos Heart.  Bleck uses this to open a black hole known as “The Void,” which will eventually consume all dimensions.

Mario is eventually found by Tippi, a butterfly-like Pixl (the link provides a description) who takes him to the inter-dimensional town of Flipside.  There he meets Merlon who tells him of the Light Prognosticus, which was written to counter the Dark (which is despairingly the true prophecy).  Mario matches the description of the Hero (yes capital “H”) described therein who will travel across dimensions to collect the eight Pure Hearts to fight against the Chaos and reverse the destruction of The Void.

Mario and Tippi reunite with Bowser and Peach who agree to help find the Pure Hearts as well.  Meanwhile Luigi has been brainwashed by Nastasia into an alter ego known as Mr. L, and The Void eventually grows large enough to consume one inter-dimensional world.  By that point Luigi regains his senses, and the group manages to collect all eight Pure Hearts.

Now, the most integral part of the story, which is brilliantly woven in as though it’s a side note, occurs as a series of flashbacks at the beginning of each chapter that recounts the tragically romantic tale of two people, Timpani of the Tribe of Ancients and Blumiere of the Tribe of Darkness.  Though the odds were against them, Blumiere promised Timpani that they’d find a world where they could be together, but that hope was ended by Blumiere’s disdainful father (yup, another Dickhead Dad…damn no trope for that…yet) who banished Timpani to wander between dimensions and die because he didn’t want their union to “tarnish” the purity of the tribe and potentially dilute their powers.  Blumiere believed there was no point to life or existence after this fact and in a despair turns to madness motif massacres the entire Tribe of Darkness (with the strong implication that his father was included) and then turns to the Dark Prognosticus to bring all of existence to an end.  As the story progresses, it becomes clear that Timpani is Tippi and Blumiere is Count Bleck, but by the time Blumiere realizes that Timpani is still alive, it’s too late to stop the dark prophecy.

In the end Blumiere is betrayed by one of his allies who attempts to use the Chaos Heart to create a universe in his own image, and though he’s defeated by the heroes, The Void grows at an exponentially faster rate.  The universes are saved by Blumiere and Timpani hastening to the chapel where Bowser and Peach were forced to wed and now true lovers say their vows not only for a union long ago sundered, but to bind together the very fabric of all worlds.

The heroes and Bleck’s allies wake up in Flipside, but Timpani and Blumiere have disappeared.  Nastasia believes that they are still alive, but in a better world, and at the end of the credits we see the two of them together at last in a beautiful place beneath a tree on a lush hillside. 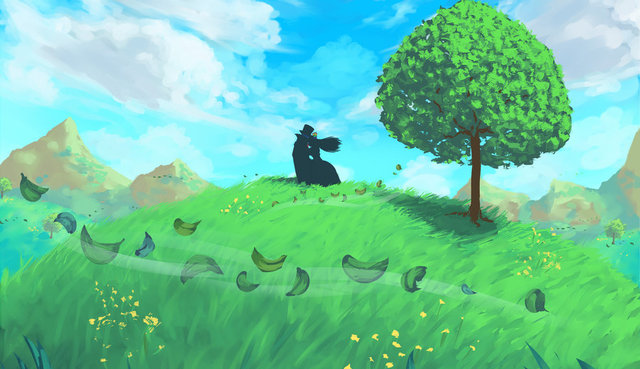 Just recounting the tale has made me tear up.  I was overjoyed that at the end they were finally together, because that’s all they wanted.  Blumiere became Count Bleck because he believed Timpani had been killed for the “crime” of loving him, and he saw no point to existence after that.  While I understand that’s a pretty selfish motif to wish for nothingness to descend on creation, this is the despair becomes madness motif.  Nor was this a case of unrequited love.  Blumiere’s father was a dickhead with what can only be considered racially pure ideals who was willing to sacrifice his son’s happiness/well-being for no other reason than his own selfish desires.  Not only that he condemned an innocent woman to wander between dimensions until her death.  No one is shedding tears on his behalf.

Though Blumiere did terrible things in his Count Bleck persona, he along with Timpani earned and deserved their happy ending.  Speaking of the Bleck, I initially thought his constant referral to himself in the third person was merely played for laughs, but now that I know the full story, I wonder if it was him trying to constantly reaffirm to himself that Blumiere was gone with Timpani and only Count Bleck remained, but despite his belief that she was dead, he still loved her and clung to the part of himself (Blumiere) that bore and suffered for that love.

The question of whether they did die and if that paradise was THE paradise is up for debate, but I don’t think it matters.  They’re together at last and together forever and that makes chaos turn pure.