10/10/14
Chapter 7 – A Calm and Private Place
Quote: “There is no shortage of fault to be found amid our stars.” –John Green “The Fault in Our Stars”
Picture: Yes
Picture Source: Yes
Picture Satisfaction: Very High

Okay first let me talk about the first quote I had.  It was also from The Fault in Our Stars, but was the more romantic, “I fell asleep like you fall in love…slowly and then all at once,” which I absolutely adore, but it’s far too soon for this point in the tale.  Possibly later, but not right now.  The one I went with is still from the same source and we do go back to Prufrock at the end.  I believe I mentioned I was re-introduced to the Eliot poem by TFiOS, but it’s too soon to speak so blatantly of love.  It’s…coming though.  In this chapter not much happens action wise, but there’s a good deal of character delving and discovery.  Here’s the breakdown.

Aeris awakens in Kalm, and the chapter title is a play on the title of Peter S. Beagle’s (the author of The Last Unicorn, which is masterpiece.  Seriously, if you haven’t read it you need to do that) A Fine and Private Place, a novel I have not read yet, but the title still rattles around my head.  The Last Unicorn is a major foundation of my fantasy education.

I always go back to that story because it showed me how a skillful author can break a paradigm with finesse.  It was one of my first examples of the concept of Genre Savvy, and I’ll never forget this one line said by Schmendrick the magician.  “You can’t marry the princess before you slay the dragon,” and it just established that there’s an order to things in fantasy stories.  The hero can’t collect his reward before he fulfills his task.

I break the rules a little bit in Northern Lights, and now I feel ill because that’s another far more sexist trope, and it shouldn’t be considered a “hero’s reward,” nor is it treated as such by the characters in this tale.

The Last Unicorn had a very whimsical almost tongue in cheek air to it as though it was poking gentle fun at itself, but still managed to stay within the fourth wall (though it might’ve been stretched a bit) and tell a remarkable tale.

I will often remember a book, even a book/story I didn’t read or didn’t like, by the title alone.  A Fine and Private Place is one of the former so is Breath, Eyes, Memory and Memory, Sorrow, and Thorn.  There was also a fanfic by the name of Wither and another (fanfic I think) called Pale Angel, Go Away.  I love these titles, but either haven’t had the time or wasn’t as pulled into the stories.  A Fine and Private Place is on my reading list (as is The Last Unicorn’s sequel Two Hearts, which has more stars than the original, whaaaaaat!), and it’s a play on A Fine and Private Place‘s name that gave me chapter 7’s title (whew…that took a while to explain, didn’t it?)  It…actually is a bit of a pun, too, hehe?  I don’t get nearly enough credit for curbing my need for punnage.  I showed remarkable restraint later for not naming a chapter “A Wing and a Prayer.”

Anyway…in this bittersweet installment Seph has not only ordered her tea (I wrote coffee for some reason in my notes *smack*), but he’s also provided dinner for her in a very…kind of clueless but sweet way.  There are a lot of things I glossed over here by having her fall asleep.  This is the first time this has really happened.

Um past Narcissist, you had her faint at the first sight of him in the first chapter.  Then she woke up in his arms.  What the hell are  you talking about?  I guess more happened in this instance, but you should clarify better.

I don’t count him guarding her that first night as nothing really occurred.  He occupied his time by reading a book of poems, but more happened this time while she slept on the way to Kalm, meaning I had to go back and talk about them in a “tell” manner.  Now I’m not 100% anti-tell, and I believe there’s a way to do so with style.

You want the master of telling in style you seek out George R R Martin, because holy shit…in the character of the Hound we’re “told” through showing how terrible and savage he is, but we’re truly shown a completely different side in subtlety.  I don’t think telling should be used in important scenes, and it’s no substitute for revealing a character’s true nature.  It’s one of the reasons one of the questions for my betas centers around whether or not Sephiroth comes off as patronizing.  It’s not my intention to do that, but author intention vs. author portrayal can be separated by a yawning chasm (see the OS and Sephiroth there).  This is the Death of the Author vs. Word of God dichotomy that I keep bringing up and that I believe I delved into, but it’s late, I’m tired, and I honestly don’t remember.  If I have you’ve seen it; if I haven’t you will.

With the character portrayal/intention vein, I shouldn’t say a character is nice, because that honestly means nothing.  I think that works in real life, too, because in writing and reality actions do indeed speak louder than words.  Seph even says that first night that he knows his words mean nothing, but then proceeds to prove that they’re true.  Now a character could remark on another character’s nature, which brings it into the realm of story and not just the words of the all mighty author who can just make it happen.  Also if a character remarks on another characters, er, character *groan* you can easily use that as an Unreliable Narrator moment or a “don’t believe everything you hear” paradigm.  It’s a bit of a cheat and a cop out because of course the author knows the character’s true nature, but giving it away is like revealing the punch line before the joke is full told.  Viewers aren’t necessarily morons.

It’s interesting to note that in reality everyone is an unreliable narrator; it’s why eyewitness testimony is generally a poor thing upon which to solely rely.  We tend to put our own spin and biases on things.  You can’t tell a story without bringing at least part of the foundation of yourself and your experiences into the mix. It can rarely if ever be unbiased.

Um, I was talking about what happens in this chapter, but then I took the tangent bus to randomville…so they have this scene beneath the stars where some of my favorite lines are spoken.  This is the crux of the chapter and was how I decided I should have a quote about stars/starlight and the picture should reflect the same.  I knew I wouldn’t be able to find a pic of one or both of them looking at the stars, but wouldn’t that be grand?  I thought about Oscar Wilde’s “We are all of us in the gutter, but some of us are looking at the stars,” but the “gutter” thing doesn’t really work since they’re out of Midgar.  Later in the chapter Sephiroth essentially quotes The Promised Land from Advent in talking about how the stars don’t forgive him (details when I get there, promise.  Oh good lord, did I just make a bad pun?)

No, I’m not directly going to quote the movie.  That would be meta and also redundant, but the quote I went with from TFiOS is short, sweet, and to the point, and what he says later ties it together well.  Now it’s picture time.  I found seven of course and I’m going to show you them all before I reveal the one I loved so hard that I went with. 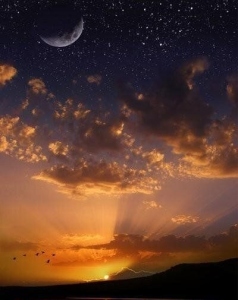 I seriously almost went with this one.  I like the sun, moon, and stars all together (“Have you ever seen the sun and the moon in the same place? *gasp* They’re the same person!”), but I kind of want it to be fully dark.  I give it a 6. 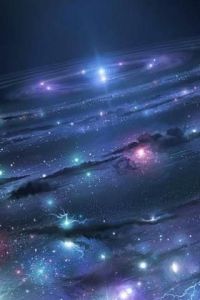 More galaxies than stars.  This is something you’d see from space not a window.  It gets a 5. 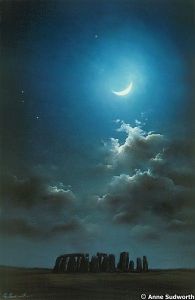 I like the moon, but not as many stars are in attendance.  This gets a 5, as well. 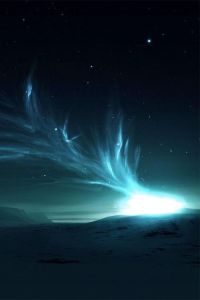 A commentator said this reminded them of FFVII’s meteor.  It’s got some nice light trails, but it’s a winter landscape.  I will be using those later so I don’t want to obfuscate the point now.  6. 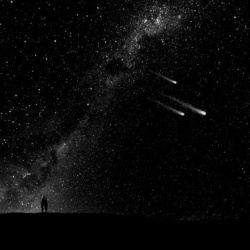 Full black sky with shooting stars.  This gets a 7.

Another more spacey picture with galaxies all a-swirl.  A solid 6.

Purply mountains are nice, but it’s not really doing it for me.  A 4 for you.

And this, gentle readers, is the winner.  I can’t tell you how much I love this picture.  It completely encompasses what I was looking for. 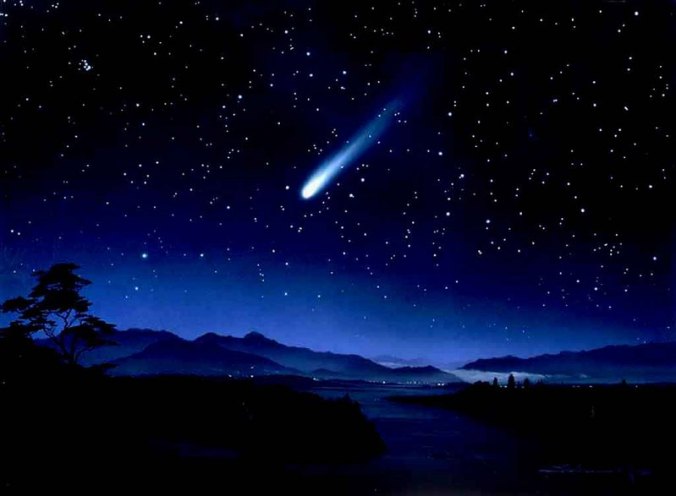 This chapter goes from page 53-62 so nine pages.  It was here that I cease for the nonce.  This was productive; I found both quote and picture in one fell swoop or not so fell at all.  I leave you with that high note, dear followers.  It took me three days to conquer the first edit of this chapter but only one day to do the second.

Until next we meet.