What is your favorite musical?

I know I’ve been neglecting this blog, dear followers, but I’m really, really pushing to finish The Broken Rose by the end of this month.  Plus my life has gotten weirder and busier as always.  So there may just be quick questions of the week until this arduous task is done.  I’ll be throwing myself back into reviews, essays, and editing blog posts again very soon.

This is another easy question for me.

I fell in love with this musical in high school, and even though I’ve never seen it live, the gothic/romantic motif shaped many portions of my life and still bleed into the flavoring of the stories I love.

While I have not read the ponderous tome penned by Gaston Leroux, I have read the adaptation by Susan Kay.

It has been years so I plan a reread, but if memory serves me correctly, I highly recommend.  The story gives background the musical leaves out to lay a greater foundation for why the elusive Phantom is a sympathetic character.

My favorite song is without a doubt “The Music of the Night,” which could be considered the Villain Song, but it comes off as far less nefarious and more of a longing for connection/validation.

While the aesthetic of the 2004 movie was gorgeous, I was not a fan of the actor who played the eponymous phantom.  His voice was not right for the part in the same way Russel Crowe’s was not apt for the 2012 Les Miserable. 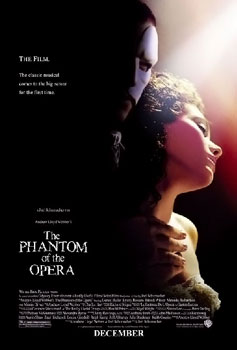 Obviously no one will sound like Michael Crawford, but they could’ve at least found someone who was operatically trained.

I would love to one day see the musical on Broadway, but until then, I have selections from it on numerous playlists, and it helps fuel quite a lot of my writer’s energy.  The lush vocals and sweeping strings never fail to send chills down my spine.