This post will be split into two parts, a review and an analysis.  The review part will be spoiler free where the analysis will give major plot points of the story away in examination.  In this way people who just wish to read a review of the novel can do so without being spoiled.  Please also not that this is the ONLY warning I will put in for spoilers so be advised for them in the “Analysis” section. 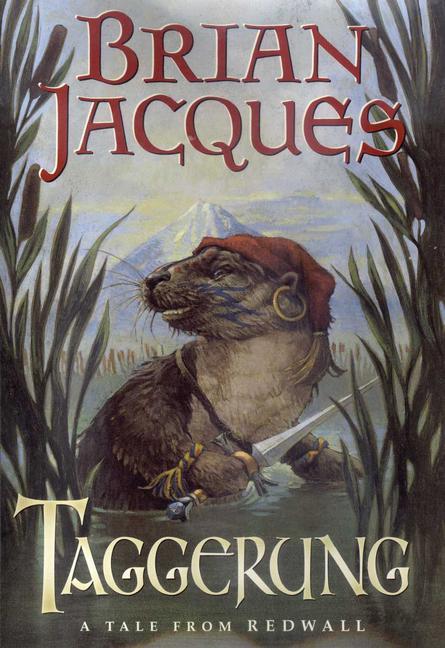 Years ago, the vermin clan of Sawney Rath kidnapped one of Redwall’s own-a baby otter, destined to become their “Taggerung,” a warrior hero of ancient legend. But as young Tagg grows, he rebels against his destiny. The young otter journeys in search of his birthplace, a member of Sawney’s clan always near, out to destroy the deserter. With the feisty mouse Nimbalo, Tagg fends off the avenging vermin, but can he find his way back to the Redwall family from whom he was separated so long ago?

Before delving into the review, you have to understand the Redwall universe, which the Great Wiki explains nicely here.  In a nutshell (which I’m sure the squirrels would love), it’s a world peopled, er, by anthropomorphic animals within an undetermined medieval setting.  The main location is Redwall Abbey, which is a place of prosperity and peace ruled over by a benevolent Abbott or Abbess.

In the earlier novels, this was almost always a male mouse, but later ones made the position more equal opportunity in both gender and species.  Most of the animals are capable of speech, and the stories are fairly consistent.  The very first novel, which shares the same name as the series as a whole, has some inconsistencies compared to the rest.  For example, I believe it is the only one where a horse appears in addition to implying a human populated village/town.

There’s very little magic in the Redwall universe despite it being classified as a fantasy.  That status mostly comes from it existing in a sort of alternative reality without humans and having the fore mentioned anthropomorphic animals as characters.  They are able to build, cook , sew, and do all sorts of things with their paws, which while named that, probably have the function and form of hands.  The only potential magic comes in the form of seers (possibly) predicting the future and the spirit of Martin the Warrior coming to creatures in dreams and/or hallucinations.  Martin is one of the main founders of Redwall itself, and his sword is so important it could almost be a character on its own.

Taggerung varies from typical Redwall fare as the meat of the story doesn’t take place at the Abbey, but rather concerns the vermin clan that kidnapped the titular character near the beginning as a babe.  The point of view; however, does switch back and forth between the happenings at the Redwall and the more exciting adventures of Deyna as he tries to discover who he is and where he truly comes from as it’s decidedly clear that he doesn’t belong with a vermin clan.

Jacques does a good job at balancing between the more action packed Taggerung parts and the more tranquil Abbey happenings by giving the characters in the latter a mystery to unveil.  Eventually, the two sides of the story combine, which was always expected when a wayfarer is trying to return home and home is a shown location.

The author has a debatable habit of introducing characters waaaaaay later in the game than is normally acceptable, but there’s always been a precedence for that.  I did have a bit of an issue with it in this book as the character introduced about five chapters away from the end made a difference between life and death.  It was a bit of an “otter ex machina” that could’ve been resolved earlier in the novel by just a mention of their name.  I also wasn’t super happy with the way child abuse was brushed off, and while I could be accused of over-analyzing a book written for children, I don’t think especially children should be taught that that’s okay.

Taggerung stands as a counterpoint to Outcast of Redwall, which had a vermin character raised by good woodland creatures who could never change his “true colors.”  That book irritates me for many reasons I’ll elaborate on if I ever review.  Deyna/Tagg is of course. wholesome to the core.  He refuses to do something atrocious and is not only cast out by his “father,” but Sawney attempts to hunt him down to kill.  Redwall clearly leans towards “nature” in this debate (and in Outcast, too, ugh, really, really in Outcast).  The entirety  of the Redwall series does have a classist cast to it, unfortunately, with certain creatures being (almost always) good like mice, hares, badgers, moles (whose accents I love btw), squirrels, otters, etc. while other animals are (almost always) bad and collectively called vermin e.g. stoats, weasels, ferrets (I believe otters are actually related to all three), rats, foxes, and generally any other carnivorous creature (though again otters are carnivorous, badgers and mice or omnivorous, and I believe moles are insectivores).  There a few exceptions to this rule, but everyone expects certain creatures to align in a certain way.

Even among the woodland creatures there’s a hierarchy with mice usually being the leaders, moles being working class, hares being soldiers/military along with badgers who are considered the best of all warriors.  Badgers are also always the ruler of the mountain stronghold Salamandastron.  Vermin will usually just follow the strongest, and they’re constantly backstabbing and double-dealing.  I really, really wish Mr. Jacques had lived long enough to write more novels mixing up these paradigms a bit.  One of the reasons I stopped reading the series was because it was the same “vermin horde attempts to take over Redwall Abbey” all the time.  This was also another plus mark for Taggerung as it avoided this cliche in fact even lampshaded it a bit at the end by having such a situation be swiftly resolved, countering prior novels where it was the entirety of the plot.

Taggerung is a never dull adventure about an otter who though grown up is still a bit of a lost babe trying to find his way home.  I’ll discuss more of this in the Analysis section, but for those of you who  haven’t read it and don’t want to be spoiled, that’s the story at its core.

For the life of me I couldn’t figure out why the hell I couldn’t get this story out of my head.  I’d read it years ago and really liked it, but there was something in me prompting a reread.  Then I realized it was about a lost child who has a happy reunion with his mother (and sister) and I thought, “Ah, that.”  When your favorite narratives are filled with dead/missing mothers, sometimes you need that guarantee of light.

Deyna’s father was killed the very day he (Deyna obviously not the father) was born while taking him to the river for an ancient otter ritual.  All Deyna’s mother and sister know is neither of them came back and both are presumed dead.  This gives the mother’s name of Filorn a nice if rueful meaning, though at the end grief does turn to joy.  Truly, Taggerung is a tale of two otters as Deya’s sister Mhera heads the Abbey parts eventually becoming the Abbess at the end where her brother takes up the legacy of Abbey Warrior.

Deyna only knows his name as Tagg until he finally returns home, though he does have a consistent dream of a mouse in armor calling out, “Deyna,” though he assumes that’s the mouse’s name.  He was stolen because the fox seer Grissoul prophesized that a creature bearing a speedwell flower mark on his paw would be the vermin clan’s next Taggerung, which is legendary warrior of unstoppable power.  Having one in your particular group is considered exceptional luck and so Sawney Rath, the chieftain of the Juska clan, contrived to make it so.

It’s obvious that Tagg/Deyna doesn’t belong with this vermin where he confuses his “father,” and is hated by the stoat Antigra who blames him for taking the Taggerung status away from her son Gruven as well as her husband’s death.  At one point in the story Jacques actually juxtaposes the mother figures of the above and Filorn, showing the stark difference.  Antigra only wants to use her son to better her position kind of like Cersei (…am I really doing this, eh why the hell not), and other horrors that shall not be named.  The comparison of good and bad mothers exists all across the spectrum of genre and medium, and in the end Deyna actually manages to gain two mothers, Filorn and in a way his sister Mhera who becomes Mother Abbess.

Gruven, by the way, is an absolute waste of fur.  Vermin are usually portrayed as cowardly, but he could be their king.  He dies in the exact same way he lied about killing Tagg/Deyna, by having his head chopped off.

The end of this story is so utterly satisfying even though you know it’s going to occur.  Deyna is injured in the exact same way another character, Cregga, is, but the otter survives where poor Cregga dies, though she didn’t lack for seasons (how the world measures age and time).

There are many parallels and dualities in the narrative included that meta one for Taggerung itself in Outcast mentioned above.  I’ve expressed my annoyance at that since vermin fate is sealed in stone.  If that’s the case, can you truly blame them for being what they are?  If nothing will change a creatures nature, the good will be good, the bad will be bad, and no nurturing is necessary.  Years ago I wrote up notes for a fanfiction that would’ve addressed this very notion.  It centered around a family of foxes from a place called Blackwood Forest.  I was going to call it The Foxes of Blackwood Forest, because I’m clever like that.  I wrote out outlines for several characters, and if I’d had the time, it would’ve been an interesting exploration as none of the foxes were evil and had left the titular forest to escape something horrible.  They would’ve come to Redwall Abbey to be greeted with trepidation since they are foxes after all, and a main part of the story would be the vulpines convincing the Redwallers that they not only meant them no harm, but needed help to vanquish whatever ill they’d escaped as it was coming…

I do fully believe if Jacques had lived longer, he may have reconsidered Redwall’s classist paradigms, but what he did leave us with will delight both every age for all of time to come.

One thought on “Taggerung by Brian Jacques (Redwall #14)”