I was looking between reading this and reading The Mortal Instruments Series (which I attempted and…no.  Maybe I’ll write an “Unfinished” review of City of Bones, but suffice it to say I was unimpressed)..  I looked up Divergent, the first book in the eponymous series, and immediately fell in love with the language and taste of the verbiage so I knew I would have to make a run to the bookstore and pick up a copy.  It’s written in the present, which is very weird as I’m used to stories being written in the past tense for things that have already happened; it lent an air of mystery and suddenness to the narrative that fit very will with the world Veronica Roth was trying to project. 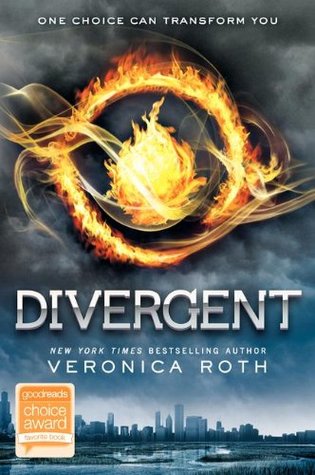 This is a dystopian YA set in the ruins of what used to be Chicago.  Human society is now split up into factions: Dauntless (the courageous), Amity (the peaceful), Erudite (the scholarly), Abnegation (the selfless), and Candor (the honest).  There are also people who are factionless, but they live on the edge of society and are dependent on the kindness and help of others (mostly Abnegation) to survive.  The Abnegation faction serve as the heads of the society as it is thought that their selflessness makes them the most prudent of choices as a leader who wants nothing for himself will be the best to guide others.  Erudite are the teachers and scientists; Dauntless are law enforcement; Amity are the peace loving hippies, but also server as society’s main food supply with Erudite technology, and the straightforward Candor act as judges.

The main character Beatrice Prior is a sixteen year old Abnegation and the story opens on the day she will choose whether to stay in that faction or decide to be something else.  Now granted this choice hinges on an aptitude test that usually only gives at most two possible directions, but Beatrice is presented with three possible paths: she can stay in Abnegation or become Dauntless or Erudite.  Something thought impossible.  She also finds out that she is divergent.  Something very dangerous.

Beatrice chooses Dauntless, changes her name to Tris and enters a world dependent on courage and quick thinking where her life before was all safety and self-sacrifice.  Her primary instructor is the elusive Four, who becomes the main love interest (this is YA after all), but Roth does an excellent job of balancing Tris’s struggle for survival with the obligatory awkward teenage romance moments.  Tris is told that she must keep her divergence a secret or risk death, and this is verified when Tris overhears Eric, one of the more sadistic Dauntless leaders, talking with someone about weeding out and killing any divergent they find.  It turns out that the divergent can manipulate simulations (which the characters transverse very often) to their own will.  They’re like teenage Neos in the Matrix.  This becomes very important in the end when all of the Dauntless are injected with a serum and manipulated into killing any Abnegation they find because the Erudite want a share of the power.  The only ones who are unaffected and not turned into mindless killing machines are the divergent.

I was actually more interested in the world of the book than the characters themselves.  There isn’t much of an explanation in Divergent about why things became the way they were.  I had to wait until the end of the second book Insurgent for that big reveal, but it was enough to make me want the third installment.  If I had to put money on a title I would say it’s gong to be called Convergent (clearly I was wrong about this as the third volume is called Allegiant, nor did I read it before being happily spoiled.  I would not have been happy to waste my time with what I consider a subpar and cheap ending).

Beatrice/Tris comes off as very cold (or she attempts to).  It’s obvious she doesn’t belong in Abnegation even though she does have some selfless tendencies.  She cares about her family and friends, but she lives in her own head so much it makes her seem detached.  Of all the characters, I believe Four/Tobias was the most well done.  Elusive enough to not give everything away, once his truth was revealed everything about him made perfect sense.  Unfortunately, the majority of the other characters are quite forgettable.  Very few of the other Dauntless stand out for me at all so when they’re injured or die it was hard to mourn them because I honestly didn’t remember who they were  (this was the same issue I had in The Maze Runner, but that story was even worse), and there is a VERY high body count.  Comparable to The Hunger Games, but in Collins’s trilogy I felt a connection to nearly every character.  In Divergent it’s tragic, but not remotely heartbreaking.

This book wasn’t regrettable but it wasn’t overly spectacular either.  It definitely had the potential to be much more in Insurgent; however, Triss’s personality is even more scattered there.. It felt like Roth was trying to make her have an outward appearance of being cold/heartless with turmoil on the inside, a bit of “conceal don’t feel.”  But her outward displays constantly undermined that. It’s perfectly fine to have a stoic character go off or snap after periods of great pressure and stress, but Triss would slip her mask per se all the time.  There was a definite divide between what Roth was attempting to show and what she did.