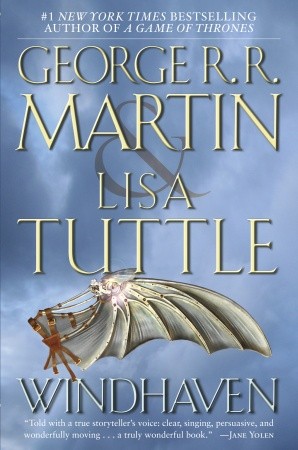 “Among the scattered islands that make up the water world of Windhaven, no one holds more prestige than the silver-winged flyers, romantic figures who cross treacherous oceans, braving shifting winds and sudden storms, to bring news, gossip, songs, and stories to a waiting populace. Maris of Amberly, a fisherman’s daughter, wants nothing more than to soar on the currents high above Windhaven. So she challenges tradition, demanding that flyers be chosen by merit rather than inheritance. But even after winning that bitter battle, Maris finds that her troubles are only beginning. Now a revolution threatens to destroy the world she fought so hard to join—and force her to make the ultimate sacrifice.”

This is yet another one of my so-called “VII books,” as in I read it because of its thematic similarities to FFVII.  I’m always so afraid I’m boring people when I talk about that, especially people who aren’t gamers and/or who aren’t into RPGs/Final Fantasy.  I know a great deal of this is my anxiety speaking, because I have a past full of being shut down and shut up when I wax passionately about anything.  I mean, this is my blog, and I can talk about what I want, and people who don’t like that don’t have to follow, but…the anxiety is still there.

Anyway…I was reading the second volume of Dreamsongs (which I’ve also reviewed here), one of the forward parts by GRRM.  He mentioned the three novellas that make up Windhaven.  One of them was entitled “One-Wing,” so I immediately bought the book.  This is a…pretty important motif in FFVII, and Windhaven predates that by nearly twenty years.  Nor is the name only significant to the the title.  There is one individual and then a group of people who become known as “one wings,” and there’s even a violent, disturbing scene involving the concept, too (something I, myself, have had nightmares about).

The book is actually an amalgamation of three novellas: “Storms,” “One-Wing,” and “Fallen.”  A great deal of time passes in between them, though they do follow chronologically.  The basis of the story reminded me a bit of Zilpha Keatley Snyder’s Green Sky Trilogy where fantastic tales are told about “sky sailors” flying to this world.  In Windhaven, they crash landed long, long ago and were unable to fix their damaged ship(s).  Some of the people wanted to keep trying, but others realized it was a futile effort and wished to scrap the machines for the precious metal they bore.  For on this world full of high winds and tumultuous oceans, humans would have the ability to soar on the currents between scattered islands.

The “scrappers” won, but not without war and bloodshed.  They cut apart the ships to fashion wings, and on that day the flyers were born.  Because of the lack of base resources, it’s not possible to make more metal for wings, only the supporting structures around them, but the material was nigh indestructible, and the story implies that its been around for thousands and thousands of years.

The first part/novella entitled “Storms” details Maris’s struggles to literally earn her wings and the right to fly.  Wings are passed down from flyer to offspring, which has created a hierarchy with the flyers (also) literally above whom they refer to as the “land bound.”  Russ, a flyer, takes interest in Maris one stormy day.  Her father is long dead, and her mother thinks her a burden so has no compunctions about allowing the flyer to adopt her as his own.  Since Russ has no children, he decides to train his adopted daughter as a flyer, which makes Maris’s dreams of flight a reality…until him and his wife have a trueborn son.  But though Coll sings like an angel, he can’t fly like one.  Maris is beyond any doubt the better flyer, but tradition dictates that the wings go with the blood.  As stated in the blurb, Maris does manage to win that arduous fight, but not without loss, and not without destroying a tradition that has been held since the time of the star sailors of old.

The second part is called “One-Wing” and refers to the character of Val who bears the title, but it becomes something more.  When Maris wins the right to fly, she opens it up for other non-flyers to compete against the elite flying families so that skill not birth determines who soars.  It…seems like a theme is being explored in ASOIAF with that idea that the right to rule should be dictated by fitness and not blood.  Those that win wings instead of being born to them become known as “one-wings” because many of the old flying families consider them “half a flyer” instead of whole.  This originated from Val One-Wing who is actually a far better flyer than many of those born to it.  Maris and him butt heads during the annual competition to see who will keep their wings and who will lose them, but several events including an extremely disturbing scene where *spoiler* someone rips one wing off of several birds and pins them to her door *end spoiler* make Maris reconsider his position and realize that she may very well be the first one-wing.

The final part of the book is “Fallen,” and the name is literally apt.  Maris has to rebuild her life after a terrible accident.  *spoiler* She loses the ability to fly due to a head injury.  Since this is a pre-industrial society, there is no advanced medicine to remedy the situation.  Her balance, an essential element in flying, was gravely effected, and she can no longer soar.  This…part brought tears to my eyes, because I deal with chronic dizziness, too, and there would be no way I’d be able to fly in my state either 😦 But though Maris may not be the flyer she once was, *end spoiler* she can no more escape that life than she can escape the truth of how she reshaped society.

Windhaven took me four months to read.  One, because I was embroiled in finishing my WIP, and two, because while it was extremely compelling at the start with high stakes, it slowed down dramatically in the middle.  It was oddly meta how the action rose and dipped like a flyer on the breeze and makes me wonder if Martin and Tuttle purposely made this so.  I flew (sorry these puns are really easy to make) through the fist part because there was a great deal for the main character to lose:  When one has known the sky to be without it would be the worst kind of hell, and indeed the initial quote captures this indelibly:

“For once you have tasted flight you will walk the earth with your eyes turned skyward; for there you have been, and there you long to return.”
-Leonardo da Vinci

Though I have no wings, I have a soaring imagination and to lose that or be maimed in such a way to make it impossible breaks my heart in empathy.  That did much to carry this story where characterizations weren’t all that strong.  Who’s who in flyer families is a fairly important concept, but it was hard to keep track of who had flyer blood and who won the wings so worn.  The middle of the second novella’s slow down occurred since the impact on Maris herself was greatly lessened.  It was more about what would happen to those not born to flight who wished for half a chance.  Since the only character I was fully invested in was Maris (and Val a bit for his contrarian nature, disdain of born flyers, and flyer culture), it lowered the stakes.  You know Maris will be fine because she’s one of the best flyers in the world even if she is technically a one-wing.  The final book heightened the tension once more, and that carried all the way to the epilogue and end.  I suppose if you’re going to have a a dip in the action, the middle is the best place for such an eddy.

I did enjoy the almost whimsical nature of the writing.  Tuttle tempered Martin’s sometimes overly raw and visceral description, though I’m a fan of that to be honest.  I’m interested now in some of her solo works and did indeed add a few to my Goodreads list.

I would recommend this book.  The concept is compelling and again shows Martin’s skills at world building.  In reading Tuttle’s solo works, I hope to be able to weed out more of her contribution to the tale.  It certainly has a different mien to it than Martin’s grittiness laced with beautiful poignancy.  If nothing else, this novel made me re-ponder the “one-wing” metaphor (not that I really need a push for that), realize happily that it predates my favorite story, and was more than likely also influenced by Paradise Lost like Martin’s own epic Song, Pullman’s His Dark Materials, and of course FFVII.