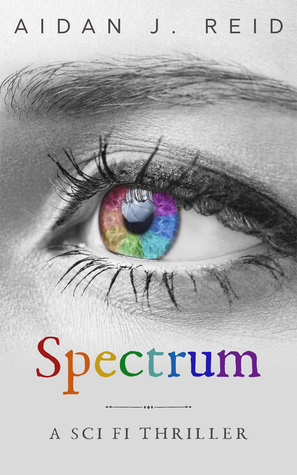 “The human brain decodes only 0.0035% of the entire electromagnetic spectrum. A tiny fraction which our eyes recognise as ‘visible light’.

BioLuminary Enterprises conduct early clinical trials and breakthrough medical research for pharmaceutical companies. Pushing the boundaries of science, they have developed a controversial new study and are actively seeking volunteers.

As far as the eye can see…”

Though I finished Patrick Rothfuss’s The Slow Regard of Silent Things prior to reading Spectrum, I decided to review the latter first as Mr. Rothfuss’s first Kingkiller Chronicle book has over 20k reviews, but Mr. Reid’s brief masterpiece has seven.  This needs to be remedied.

I discovered this story on the author’s own blog, and added it accordingly.  Briefly…it’s phenomenal.  I was hooked by the opening line.  To say too much would be to give the story away, but the main character is an unnamed young woman with a slew of problems (drugs, alcohol, and homelessness more than likely due to the prior) is offered an opportunity by a medical research company.  She takes it and the story is a record of her experiences.

Reid flawlessly shows us how certain people are considered expendable, which is especially evinced by an extremely chilling section at the end.  The limited point of view forces the reader to look outside of what the narrator can see (if you read the story, you’ll understand the meta in this description) and realize just how much she’s being taken advantage of as a marginalized member of society.  Even though she’s been living on the streets and comes off a bit rough around the edges, she has an almost childlike trust of what this company’s representatives are telling her.  The end is an absolute gut punch made more brutal by how quickly the drop occurs.

At 35 pages Spectrum was an incredibly quick read, which was facilitated by my inability to put it down.  It is a brief but powerful commentary on bioethics, and it forces us to question what may very well be going on right now.

I’ve added Mr. Reid’s other books, Pathfinder and Sigil to my to-read list, and if Spectrum is any indication, I will thoroughly enjoy both reads.