James Dashner’s The Maze Runner was the Caffeine Crew Reads book for August. Initially, I was worried I wouldn’t have time to both read and review this novel, but I figured I’d download a sample on my Kindle and at least give it a try. In doing so I realize the book was only around 380 pages long, which isn’t that bad, and while I wasn’t overly intrigued with the characters, the situation did spark some interest and the length was doable for the amount of time I had. 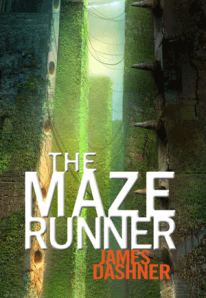 The Maze Runner is the first novel in a YA dystopian trilogy (because that’s what’s hot now) followed by The Scorch Trials and The Death Cure with an added prequel of The Kill Order. The initial installment opens with a boy in an elevator who can only remember that his name is Thomas. He’s thrust into an all boy’s colony called the Glade where the so-named “Gladers” speak in slang reminiscent of William Golding’s Lord of the Flies, which is both an excellent novel and a difficult paragon to live up to.  No one will really answer Thomas’s questions about what’s going on much to his (and the reader’s) frustration. He’s only told the bare minimum by Alby, the leader, and Chuck, an annoying kid who somehow becomes his best friend.

The Glade is situated in the middle of a maze where runners go out every day trying to solve it in order to find a way home. The maze is guarded and patrolled by creatures known as grievers who look like slimy worms covered in spikes and claws (at least that’s what I took from the description) in addition to sentinels called beetle blades that are believed to report back to the Creators, the people who put them in the maze. Everyone there has no full memory of where they came from or who they were. The only glimpse they’re allowed of the past is if one of them is stung by a griever and is then given the “grief serum” in order to survive. The serum will save you, but you’ll go through the “changes,” where it’s believed you remember your past life. It’s for this reason that Thomas arouses the wrath of one of the boys Gally who “remembers” him and doesn’t like what sees.

What little Thomas is told is that a new glader arrives about once a month and supplies are sent on a regular schedule up in the elevator or box that brought him and the rest. Most of their needs are provided for, and the only real danger are the deadly grievers and of course the boys themselves. The walls of the Glade close every night to keep the grievers out (interestingly enough none ever try to come into the proximity during the day), and it’s also believed that the maze itself changes with this event. Runners have been mapping the maze for nigh on two years, but no discernible pattern can be divined.

It doesn’t take long for the “normalcy” to be thrown off when the very next day the box returns with another inhabitant, a girl who is (of course) beautiful. She states before passing out that everything is going to change and carries a note indicating she’s the last one ever. More suspicion is cast Thomas’s way at this revelation as it seems entirely too convenient that he’d show up one day, then she’d show up the next where the pattern prior had always been about a month in between. Thomas also feels a connection to the girl (whom we find out later is named Theresa) that he wisely chooses not to divulge to anyone since he has enough angry eyes glaring his way. He decides to concentrate on his primary goal of becoming a maze runner, which he felt was his purpose the moment he arrived.

This book felt like a Hunger Games/Lord of the Flies crossover with the deadly arena and “mutations” for the former and (mostly) all boys colony and specialized slang for the latter. Initially, it reminded me of a story I read years ago in high school called House of Stairs, which chronicles a group of teenagers placed in a strange building made of nothing but stairs (per the title), and all their escape attempts lead them back to one place. Their interment serves only the desires of curiosity whereas MR has a far more desperate motive where the ends are perceived to justify the means.

After I finished MR I went to James Dashner’s Goodreads page (hm, Dashner, Maze Runner. Interesting…) just to get a feel for the author. He has an adorable picture up there, and it reminded me that authors are first and foremost people, and while we can and should critique their work, we must remember that there’s a person behind every book.

That being said the characters in The Maze Runner have no personality and are virtually interchangeable. The only reason we know a difference is in their names and what the author tells us about them. He is very guilty of telling rather than showing (a crime I previously called Brandon Sanderson out for). We know Alby is cranky/angry because Thomas constantly tells us so (also angry black guy stereotype much? Sigh…I suppose it’s no worse than the only girl there being drop dead gorgeous, but whatever).  We know Chuck is annoying because Thomas says he’s annoying.  Reading the boy’s dialogue, he’s no more irritating than anyone else.  The descriptions of their emotions is so wooden and unevocative. We are told someone is angry or scared or excited instead of being shown anger, fear, or excitement. Because of this, you yourself feel nothing for the characters. Kids are killed and there should be an emotional response to that, but the writing is so rudimentary that you don’t. I remember crying my eyes out at *Hunger Games spoiler* Rue’s death *end spoiler* because she was a real person connected with *HG spoiler* the MC’s sister Primrose (and not just by their flower names, which is whole different essay)*end spoiler* made alive by the writing, shown to matter by the prose. The deaths in MR are just like the characters, mere words on a page. You don’t feel for mere words on a page; you feel for the people those words created. Dashner almost created caricatures of characters. People we only know because he tells us we know them, not because of any emotional connection. Any boy could’ve played Thomas’s role; any girl could be Theresa. The only thing that kept me reading was my fascination with the situation. I wanted to find out about the Creators as much as (we’re told) the characters did. The situation carried me not them, and while I’m all for a plot driven piece (I actually prefer it), I wanted to feel something for the people who are burdened with bearing it.

I looked up the other three books in the series, the two sequels and prequel, and was interested but still disappointed. You do find out what’s going on in the world at the end of MR, and the next installment, The Scorch Trials, elaborates on it as the characters are thrust deeper into the Creators’ world of manipulation. It was a bit compelling, but I’m not overly impressed with how the post-apocalyptic scenario was handled. It’s a great idea, but it almost seems like Dashner is juggling too much. The books seem to have a decent following though and a (shocking) over 4.00 rating on Goodreads, so I suppose other people had less of a problem with the flat writing and lack of characterization than I did give The Maze Runner some credit only because the situation Thomas and his fellows found themselves in was compelling enough for me to at least finish this first installment, but I have no intention of reading any of the others. This story is also slated to be a movie, and I believe this may be one of the rare cases where the movie stands to be better than the book.