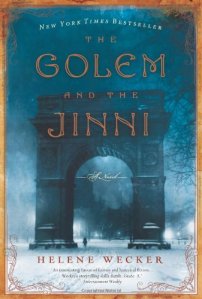 Chava is a golem, a creature made of clay, brought to life by a disgraced rabbi who dabbles in dark Kabbalistic magic. When her master, the husband who commissioned her, dies at sea on the voyage from Poland, she is unmoored and adrift as the ship arrives in New York in 1899.

Ahmad is a jinni, a being of fire, born in the ancient Syrian desert. Trapped in an old copper flask by a Bedouin wizard centuries ago, he is released accidentally by a tinsmith in a Lower Manhattan shop. Though he is no longer imprisoned, Ahmad is not entirely free – an unbreakable band of iron binds him to the physical world.

The Golem and the Jinni is their magical, unforgettable story; unlikely friends whose tenuous attachment challenges their opposing natures – until the night a terrifying incident drives them back into their separate worlds. But a powerful threat will soon bring Chava and Ahmad together again, challenging their existence and forcing them to make a fateful choice.

I was brought to Helene Wecker’s novel on the recommendation of a friend and fellow writing. After reading the blurb, I became a bit pre-enthralled because of the mention of Kabablistic magic, since I have the Tree of Life tattooed on my right arm.

The Golem and the Jinni follows the plight of Chava, a golem left alone in the world after her master dies at sea, and then moves to Ahmad, a jinni born of fire in the ancient Syrian desert. I downloaded a sample and read through, but something bothered me; something was lacking, though I couldn’t figure out what. So I searched through reviews and found mostly fours/fives before I stumbled upon a three. Here hid my kindred spirit who pointed out the tale’s lack of passion. That was it. That’s what was missing. The story was fine; the words more than serviceable, but there was no flame beneath, a sad lack for a novel partially about a fire entity. The author knows how to put words together, but never infused anything into them. I was quite disappointed, because I really, really wanted to like this story.

The sample ended not long after the introduction of Ahmad the jinni, and I toyed with the idea of buying the novel because I was interested in what happened to the characters, but the lack of passion stilled my hand. This would be a story that I would look up the synopsis for on Wikipedia rather than spend my time reading.  If you’re able to look past the missing passion I am sure it’s a more than adequate tale.