Update:  Thanks to carrie482 of Tarot Newbie for locating the artist for the picture of Aeris above!  It’s entitled Aeris: art neauvou by saorimaru.  You should both check out their blog and the artist’s Deviant Art page 🙂

The High Priestess is none other than indomitable Aeris from FFVII who even past death did not fail to complete her fated task.  I would love to credit the artist for the flower maid’s picture, as it is itself reminiscent of the associated card, but alas, I cannot find them.

The High Priestess represents the feminine divine, and there’s a great deal of esoteric symbolism involved with her blue robes and the lunar crescent at her feet.  The former not only references Mary (aka the Holy Mother), but also indicates flowing water, something Aeris is certainly associated with.  As for the latter I’ve said a great deal about how the moon is a major reference in the Final Fantasy series here (“The Eerie Reunion of FFVII and FFIV”) and here (“The Seventh Is the Darkest”)(where I also mention the triple goddess motif as it applies to her), and the pillars the High Priestess sits between are reminiscent of the outer pillars of the Tree of Life with HP (and by extension Aeris) in the middle.  This is quite interesting as the Qabalistic Tree of Life is made up of the Holy Sephiroth, nor can it be denied that Aeris and Sephiroth are intricately tied together. 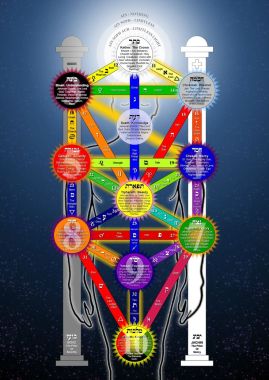 They’re two sides of a false coin with Seph basing his origins off of a cruel lie and Aeris knowing hers to be pure.  She’s the balance between two worlds that belong together (Cetra and human) as the High Priestess sits where the Column of Equilibrium would be.  Conversely Sephiroth is the “unbalance” of two worlds that were forced together (alien and human).  Aeris is a natural hybrid born of love and mutual respect, whereas Sephiroth was born of perversion and arguably something worse (see link to “The Seventh Is the Darkest” essay above).  They aren’t the only or even truest “two sides of the same coin” motif in the game (and I swear I talked about this in one of my essays, but I’ll be damned if I can find it now), but this will be discussed more extensively in later essays.

Aeris may portray the trope of “the magic girl” on the surface, but the reality of her full powers are deeper than the lake in which she was entombed.

Nobody guessed Aeris but two people guessed the alternate, and in truth Yuna is just as good for Aeris as the High Priestess for similar connective reasons per her own story.  I’m being a bit cryptic so as not to give the characters for any other cards away, but I will be talking about Yuna again.  Not necessarily as a card of her own (spoilers I haven’t decided all of the Major Arcana yet), but she will definitely be mentioned!

Give a nice round of applause to LightningNightNova (if I messed up the capitalization of your name I apologize!) and Mr. Panda for their excellent and insightful guesses!

Next week is III The Empress.  Leave your guesses for whom you think I might pick in the comments!  As with this week’s if you guess the game they come from and/or one of the alternates (I’m giving so many concessions lol.  I like giving people credit/shout outs), you’ll get credit, too.