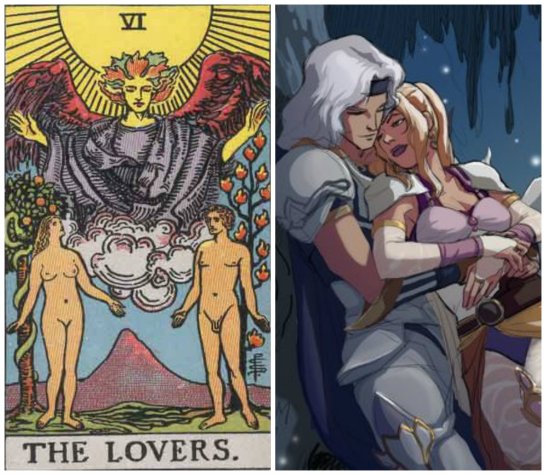 This was almost a freebie card as it really could’ve been any Final Fantasy lovers, but I went with my favorite Cecil and Rosa from Final Fantasy IV.  I love the dichotomy of light and darkness in all areas, but IV did it a little bit different in having Cecil be a legitimate and bonifide white knight for true.  While I hate the fact he thought he wasn’t good enough for Rosa as a dark knight, I have, er, aesthetic reasons for loving his paladin look.

The Lovers as a card is associated with relationships exactly as one would expect, its appearance in a spread meaning some decision about an existing relationship, a temptation of the heart, and/or a choice in potential partners is going to be presented.  This makes me lean towards Cecil, Rosa, and the mien of FFIV even more since the game presents a sort of a love triangle with Cecil’s best friend Kain, though there isn’t much evidence presented that Rosa has any feelings towards him at all, and Kain’s case is quite unrequited.  The card presents the dichotomy of one partner being chosen, while another is turned down, and that certainly fits FFIV to a tee.

I used to love the Celes & Locke OTP, but now that I’m older I see it more like Leia and Han, and that relationship would not work out so well (as we saw in Episode VII).  Celes was the general of the Imperial army, and Locke is a treasure hunter.  She’s elite, near royalty, and he’s pretty much a thief.  As a teenager the idea of opposites attracting hadn’t yet been proven fallacious, plus I was way more into traditional Rescue Romances back then, but now as a crotchety old gamer, it’s kind of ludicrous that Celes would tolerate that for more than five minutes, and my fanfiction writer friend runicmagitek has well solidified my love for Celes & Setzer now.

I’m just not a huge fan of Squall & Rinoa for different reasons.  She has so little personality besides Manic Pixie Dream Girl and is more of a plot device than an actual character.  I guess they were going for “lighthearted girl brings brooding loner out of his shell,” but it didn’t seem wholly genuine.  Tbh I’d like Squall & Selphie more.  That little lady had spunk, and her super green eyes reminded me of Aeris.

Btw notice I didn’t mention FFVII, because I am not touching that love triangle, flame war starting nonsense with a seven foot pole.  The only “couple” that would have a ghost of a chance for me to pick would be Vincent & Lucrecia, especially considering “the dichotomy of one partner being chosen, while another is turned down.”  That decision most certainly led to woe and regret.

A round of applause for hungrygoriya for perfectly guessing the canon couple!

There were two guesses for Squall & Rinoa and one for Snow & Serah.  Alas, I have not played any games after FFXII.  This means I may have to revise this list after I get to later games, but the information at least rules some characters out.

Next week is VII The Chariot, a bit of a complex card that made me reconsider my prior choice.  I was going to pick one of the airships; however, at recent examination (and using this site for a better resource), there is a person I think fits the mold.  Happy guessing!