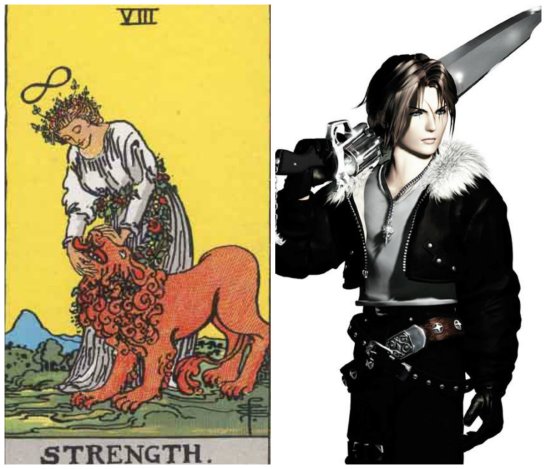 The lion for me was the dead give away, since that’s a major Squall symbol.  It’s one of the few “regular” animals in FFVIII’s fantasy/sci-fi world although it is referred to as a monster interestingly enough.

The lion is of course the king of the beasts and thus is a symbol of strength.  Rinoa comments numerous times on Squall’s fortitude and military prowess, which brings up some interesting questions.  As stated in my post about The Lovers’ card, Squall and Rinoa are probably my least favorite canon couple, but there’s no doubt that eventually she “tames” him insofar as reaching through Squall’s sullen ennui so fueled by abandonment issues (I could write a decent length article about Squall whom many fans seem to detest for his moody-broodiness, but his behavior and mien make perfect sense based on his past experiences.  I’ll leave that for when I review/analyze Final Fantasy VIII though); therefore she could be represented by the woman holding closed the lion’s mouth.  Untempered strength is a dangerous thing, and the very least I can say about their relationship is it does in part fulfill the unity of opposites motif.

I didn’t even consider him until Lightning Night Nova made that her guess in the comments.  I was quite close in consideration, but he would more align with the lion tamed, which is more subdued strength.  Granted, I did just make the same argument above with Squall.  The strength of the card isn’t really the lion; it’s the one who tames him for her own purposes…

Mr. Panda guesses correctly again!  I’m still not sure what I’m going to do for an award, but I’ll definitely be tallying up how many each person guessed correctly and do a top three at the end of the 22 weeks!

Next week is IX The Hermit, a card by many other names, which is my poor excuse for a clue 🙂