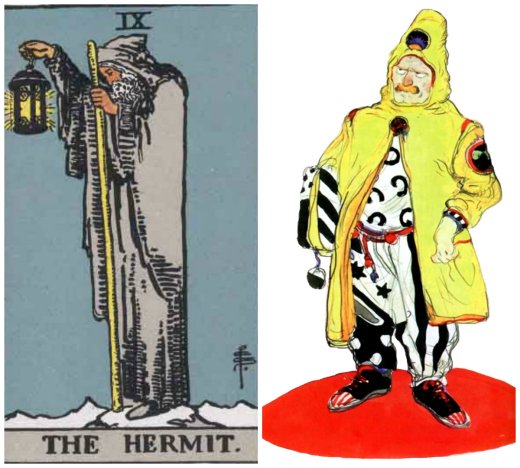 My choice for The Hermit is none other than Cid from Final Fantasy VI.  This decision became easier the more I thought about it.  The Hermit is a lonely figure whose time is spent in reflection, introspection, and analysis.  By these descriptions, this is clearly not the Cid of the World of Balance, but the solitary elder of the World of Ruin, the name of the island you find him on giving testament to such.

It also bears mentioning that the Cid of this time spends his (last) days taking care of the injured Celes who could be considered the “light” the Hermit is carrying.  They symbolism of this is hard to ignore, especially considering Cid can die in order to preserve this light.

Cid was a scientist who was integral in Celes’s augmentation/enhancement; however he never considered her merely a specimen, rather looking upon her as a granddaughter.  The Hermit is an individual who can shine light on things previously mysterious and confusing, and Cid certainly does this for Celes who starts off that part of the narrative as The Fool of her own story (I always loved that FFVI arguably had two main and female characters.  Terra for the first half and Celes for the second).  The Hermit is more of that wise, older figure whose purpose is to provide insight and wisdom to those fated to forge ahead.

Initially, I’d thought of Matoya sitting in her cave with her crystal ball, but on further reflection those were the only true hermit-like qualities she possessed.  The first Final Fantasy wasn’t huge in character development, but by the time Square reached VI, they were experts at cohesive characters and their arcs.

The floating Bugenhagen from VII was another option as he was Nanaki’s (Red XIII’s) mentor and gave the rest of the party insight into the Gaia Hypothesis, which is a major theme of the game.

Ramuh in IX initially appears as old man when Garnet and the party end up on Pinnacle Rocks after fleeing Alexandria.  He imparts an old story to her about Joseph and the Goddess Bell (which is a reference to FFIII), instructing the princess to put the parts in order before he will become one of her eidolons.  The interesting thing is the story has only four parts, but five choices.  You must pick how you want the tale to end.

No correct guesses this week!  That’s okay; there are 13 more chances left.  I’ll give an update of where everyone stands in the 11th week since that’s the halfway point.

Next week is X The Wheel of Fortune.  This is a card of luck.  Care to take a gamble?