I sailed to Elfheim this week.  Huh, that sentence sounds like the opening line to an epic story.  Alas my experience wasn’t quite so exciting.  The next level of spells and upgraded weapons are really expensive, and the enemies in the area don’t drop much GP.  I might turn to the Google and see if there’s a better place to farm.  I seem to recall when I was playing (or watching) the original that there was a good grind spot so that’ll be my next goal.  To give you an example, one new spell is 1000GP, but the enemies are still dropping only around 100-300GP, and I need to buy at least eight spells.

My next task is to go to Troia Castle.  I explored the town and found some secret stuff, but last time I played, I was too tired to progress the story.  The part with the Dark Elf requires you to not have any metal weapons in his cave, so your best equipment is useless.

Huh, I just realized I’m in an analogous place in IV that I am in DoS.  I have to defeat the Dark Elf there (whose name is Astos; no wonder he’s pissed) in order to break the spell on Elfheim’s sleeping prince.  It’s a bit of a gender reversed sleeping beauty.

I’m off Thursday and Friday this week and along with Christmas planning and preparation, I get to play more WOFF.  I just finished up a part involving an “underground” city with a Norse name, and my next goal is to search out some of the Mirages I missed there and on the sands.

I’m trying to formulate a plan to obtain more Mirages since you can transfigure new forms from the ones you have.  So for example right now I have Shiva and Bablizz/Mishiva, the latter being one Mirage that I can now transfigure into both forms, and both can be transfigured from Shiva.  If I can obtain one more Shiva, I could transfigure her into a Mishiva (or a Bablizz) and then have one of each.  The same goes for Ifrit.  Usually Mirages will give you another prism of themselves as you go along their grid, and I’m hoping this holds for the Shiva, Ifrit, and Ramuh (I still need to get a Zapt).

I’m debating making another chart that shows which Mirages can be transfigured from others.  Then I can put a plan into place to obtain them.  I could go back to the Nether Nebula to look for another Fritt (since I can now transfigure him into Affrite).  It’s a decent leveling spot so while I was hoping for an encounter, I could grind.  There’s also the Windswept Mire with its Flan Princess and Malboro Menace.  I think I’m finally at a level where I should be able to defeat them pretty easily.

As you can tell, I’m taking my time with this game.  I’m going to eke as much enjoyment out of it as I can.  The next story part is The Big Bridge, which I keep hearing about.  I know it’s a very long chapter, and one of the earlier interventions is finally going to open up in the Girl’s Tearoom.  My guess is you can’t do an intervention until you reach the point of its location in the story line.  It’s odd that it showed up as the third one right from the get-go.

I just watched one of the most beautiful parts of this game.  It probably wouldn’t stand out to most people, but it was an utter dream of perfection, showcasing how expert programming, animation, storytelling, and voice work can come together.  And this was in not one, but two situations on Ilium.  The first involves Shepherd talking to the holder of a contract for Zhu’s Hope where she (Shepherd) convinces her to alter an inhumane caveat, and the second is the reaction of the asari whom Shepherd did this for.  The subtle intricacies of how emotions play out in the second situation is so well done.

The video should start at the correct point, so just hit play if you’re curious.  I don’t think it will spoil much unless you’re really interested to know how Shepherd handled the Thorian in the first installment and don’t want that given away.

I will say that the quality of these games only seems to go up, and I’m hoping by watching all of them, I’ll be a bit more lenient on that controversial ending. 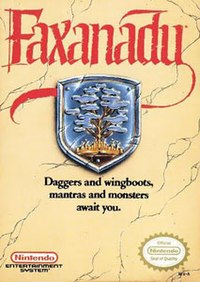 I’m happy to report I’m watching another Hungry Goriya Let’s Play, and this is actually the game that got me into watching Let’s Plays.  Years ago, I came across something that reminded me of it, and because I neither had the game (nor the skill to play it even if I did), I decided to seek an internet solution.  Thus my introduction to the world of LPing was born.  I’d seen videos about such before, but never liked listening to any where the player spoke, because their voice and/or mannerisms annoyed me.  The first Kid Icarus I watched was just a silent play through, and I loved that, but Odinspack33 had a calm, chill voice, and I realized that it was just the matter of finding the right LPer.

So I’m happy to watch a friend play through this game again!  I didn’t know (until I checked the Great Wiki) that it was part of a series called Dragon Slayer and is a spinoff of Xanadu (the name being a portmanteau of that and Famicom).  You really do learn something new every day.

This was one of those games we rented in my youth, but neither I nor my brother ever even got so far as to obtain the mattock.  Now that I’m reading more about the story, I’m seeing similarities with another game you all know I love.  A fallen meteorite brought an Evil One to the world, and it transformed the dwarves into monsters and set them against the elves.  Hm, I seem to recall a motif where an evil alien creature fell to the world and mutated people into monsters, so that appears to be a fairly common staple of fantasy/fantasy video games.

Everyone is talking about this game, and Cheap Boss Attack mentioned it in his weekly Freakin’ Weekend post with a picture of the giant dog-mouse-bird thingy, and it’s so adorable that there’s no way I can’t be interested.

No PSN sales for me this close to Christmas!