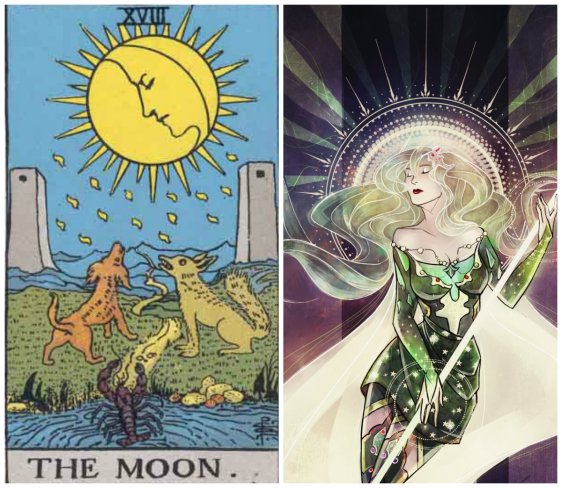 The Moon is a mysterious card, difficult to divine, enigmatic, and mysterious.  This bled into the meta, making it quite the challenge to pick a character who exemplified it.  Ironically, the prior Star card was swayed by the insightful input of my fellow bloggers when I was fairly certain on this point; however, though I was flexible on The Moon, in the end I decided to go with Rydia whom I choose a year ago when I first conceived of this project.  I suppose that even though the moon is changeable, it always comes back around 😉

This Major Arcana represents intellectual light as a mere reflection, and beyond it is an unknown mystery that cannot be revealed, esoteric knowledge.  Rydia is washed overboard by Leviathan and ends up in the Feymarch or fairy realm.  When she returns she has knowledge beyond mortal men.  She has been to the other side and come back.  The Moon is a card of that scary, dreamy, secret otherworld where the darkest of magic lies.

I can’t believe it took me so long to make the connection with Lucrecia’s last name being freaking Crescent, and she most certainly possessed dark, esoteric knowledge that kept her from every finding peace.  Her self-imprisonment in crystal could be seen as an escape to another world where what she did and what she knows can cause her pain no more.

Vincent is similar with his self-imposed imprisonment in a coffin beneath the Shinra Mansion, the place where it all began.  He also has that dark side of Chaos, which while not activated by the moon, could almost be equated with werewolf mythos.  This is on top of the former Turk being aligned with vampire mythos, something I’ve always believed but can’t quite explain.  The coffin connection along with the moody-broody attitude and eternal regret help spur this along.  Squeenix has managed to create a character that encompasses both werewolf and vampire traits without being too over the top with either of that.  That’s freaking impressive.

Seifer from FFVII was another consideration due The Moon card also being associated with the fine line between psychopathy and genius.  Seifer fell in love with his idea of the romantic dream and pursued this ideal for better or worse.

Finally, Auron from X because of his in between state as an unsent.  He rides the line between Spira and the otherworld and is possessed of esoteric knowledge.

While no one picked Rydia, both guessers still win this week!  LightningEllen choose Auron who’s an alternate, and Mr. Panda opted for FuSoYa who is from the same game as Rydia 🙂

Next week’s card is The Sun, an undeniably optimistic card, representing joy, enlightenment, victory, and happiness among other things.