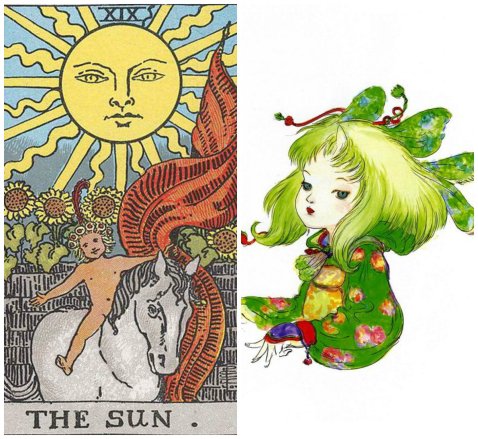 The Sun is a card of triumph, simple pleasures, and truth.  In opposition to the Moon, which symbolizes inspiration from dreams and otherwordly visions, the Sun is much more in your face and wide awake; intellect and youthful energy. I had quite a time figuring this one out.  Final Fantasy boasts many characters with this quality, but I knew I needed someone who was not only childlike, but also a child.

Eiko literally flips the meaning of the Moon in giving Dagger clarity and closure on the princess’s oldest dreams.  The little girl is the truth giver, revealing Garnet’s origins, welcoming her home, even as Eiko herself enjoys the pleasure of companionship in the breaking of solitude.  While the sun’s light may not always fall on the happiest memories, it will still always show it plain, lighting a clear path, and giving you the courage to forge ahead armed with new revelations.

I was very close to picking Porom, since intellect and youthful energy are major components of the Sun card.  Because he’s an irascible, five-year-old mage in training, I thought he would make a good match, but my own bias came into play.  I’m not overly fond of Porom’s character (I like him even less in The After Years), and besides that, I’d already used Rydia from IV in The Moon entry.  Not that I’m averse to using the same game twice in a row, but since I had another (and imo better) option, I figured I’d use it.

Relm from VI would certainly fit the artistic side of the card, along with the youthful energy, and she could arguably fulfill some of the truth aspect in reference to Shadow, but FFVI was very good at keeping that vague.  Eiko’s traits are far clearer.

Selphie and Rikku from VIII and X respectively have that bright, optimistic aspect, and Rikku certainly is responsible for revealing some truths (for both Tidus and about Yuna), but while they’re both childlike/innocent in their way, I wanted someone who was actually a child.

No one guessed the card this week, but everyone who ventured did guess something right!

LightningEllen and Mr. Panda both went with Rikku who’s an alternate; Hungrygoriya went with Selphie who’s the same; and The Otaku Judge guessed Amarant(h) who is from the same game as Eiko.  I like when everyone wins 🙂

Next week is Judgment, and I’m kicking myself a bit, because I totally could’ve used Gabranth for that instead of the Justice card…but I suppose he fits that Major Arcana, as well, and I’m never one to turn down an intellectual challenge.  I do have something else in my notes (notice I said something and not someone), but I’m not sure yet if I’m going to go that route.  What this means is Judgment could be a person/character or it could be a place/thing.  Oh, and Judgment’s alternative name is The Angel, but that ship’s kind of sailed now hasn’t it?