We finally come to the end after 22 wonderful weeks, though it feels odd to say that this is final, since Final Fantasy is never final.  It goes on and on ad infinitum, repeating the same elements in different ways.  Thus is The World card. While it does represent a pause in life, it also heralds the beginning of a new cycle with The Fool on another journey.  Like the game series, tarot is cyclical, which is one of the reasons I believe they line up so well.

I chose the Gaia from Final Fantasy IX because IX itself represents the end of a era.  It is the final (that isn’t) send off for the series on PlayStation.  The pause that reiterates before moving onto the next, and it’s fitting that the next, X, takes place in a world called Spira, the spiral.  IX also has the grand motif of the coming together of two different worlds, Terra to Gaia, earth to earth, into one.  This is the same motif presented in IV with the Lunarians and the people of the Blue Planet and in VII with Aeris as half-human, half-Cetra, and darker with Sephiroth as part alien.  The World is also said to represent the cosmic consciousness, which aligns well with VII’s spiritual flow of the Lifestream.

The four figures in the corners of The World card can represent either the Book of Revelations 4:7 where the throne of God is described (and I’m sure I could make a case for the Four Horsemen if I were so inclined to delve a bit) or the representatives of the natural world, the kingdom of beasts.  There is also an astrological connection.  The Lion is Leo, a fire sign; the Bull is Taurus (yasssss), an earth sign; the Man is Aquarius, an air sign; and the Eagle is Scorpio, a water sign (not sure where the Great Wiki is garnering that from, but okay).  Of course these four hold the balance of the world and the universe, and we have Final Fantasy’s ubiquitous Crystal(s) for parallel.  Though the four separate parts disappear after IV (or V, since I haven’t played that yet, I can’t speak to it), they still exist in some form in VI-VIII and return in IX spread out among Gaia’s kingdoms.

The World is both the end and the beginning, and Final Fantasy (ironically for its name) has no end, and as the first game is a time loop, a beginning is questionable as well.  While I used FFIX’s picture for Gaia, it is highly probably that all of the games take place in the same world, and all Gaias are the same Gaia, and there may just be one story told and retold infinite times as each cycle ends and begins again.

Mr. Panda gets the final card with his Gaia guess!

Now it’s time to declare the winners of the game.  Seven of you played at various points in time: Mr. Panda, The Otaku Judge, LightningEllen, Carrie482, Hungrygoriya, iplayedthegame, and Athene|AmbiGaming, and I thank you all for participating whether you guessed one or 21 times!

Just to reiterate the scoring system, a correct answer would net you 5 points.  Guessing an alternate would give you 3, and picking a character from the same game as the right character earned you 1.  So without further ado…

In 3rd Place with 13 points we have Hungrygoriya! 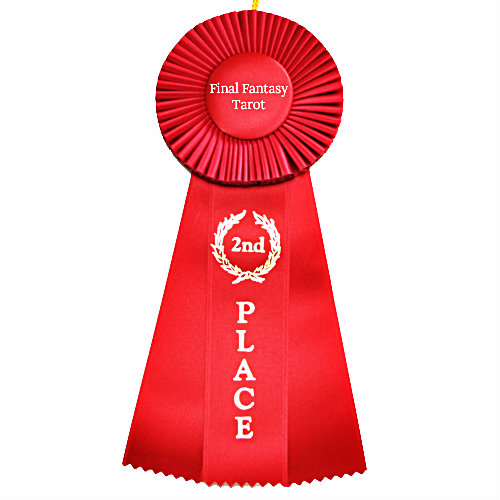 And at 51 points the 1st Place ribbon goes to Mr. Panda!

I had so much more fun than I ever thought I would doing this for the past 22 weeks, and I hope you all did, too, whether you guessed or not.  Quite a few people expressed that they learned a lot about Final Fantasy and Tarot during this series, and I’m glad I was able to introduce deeper aspects of one or both.  I love Final Fantasy as you all know, and I’m obsessed with religious and esoteric symbolism, so this was a match made in heaven for me.

Thanks to everyone who participated either by guessing or just commenting to show your interest and support.  The general consensus has been on me doing a Final Fantasy Astrology series next, so I’m going to start preliminary research on that.  Until then, I’m not sure what (if anything) I’m going to do on Fridays.  I have some brief articles and lists I could regale you with (I seriously doubt I’ll be able to write an FF essay a week alas) or I might use the time to work on bigger projects.

Once again thank you all, and please feel free to display your ribbons on your sites if you so choose 🙂  If you’d like to know more details and/or your score, just let me know in the comments!