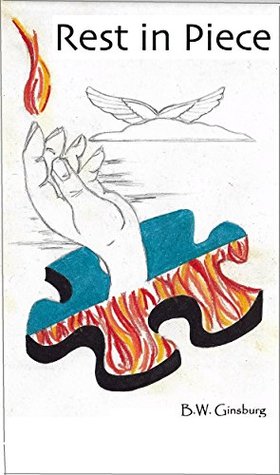 Though decades apart, two young girls are connected in a way that is both fantastical and surreal. When twelve year old Louise Erikson finds out that she holds the key to saving a nine year old who disappeared twenty years earlier, she decides to accept the challenge. Will Louise be able to rescue the girl and the others locked away with her before it’s too late?

This is a story published independently by fellow writer B. W. Ginsburg who has a blog dedicated to it here and another more personal blog here.

My initial take on Rest in Piece was as a motif similar to the one in The Lake House (a film I haven’t seen, but I know enough to recall that spin) where two characters are living yet communicating decades apart.  Ms. Ginsburg’s novel is a bit more sinister than that as Catherine Adams is trapped in a type of purgatory by a mysterious puzzle.  This is more of a Jumanji vibe, if Jumanji dealt with demon possession.

What the book gets right is the urgency of Louise’s quest and fascinating eeriness of the puzzle.  It’s also a swift, easy read, which is not only perfect for the mid-grade group it’s directed towards but anyone who wants to delve into a rousing paranormal tale.  Mid-graders will appreciate and identify with many of the hurdles Louise faces in her effort so save the trapped Catherine, and the young girl’s fears for her parents’ reactions are logically sound.  She even points this out to her father near the end, and George has to agree.

There is an over abundance of telling and exposition in this novel, which unfortunately takes a great deal of the surprise factor away.  There are many shocking scenes at the end, which would have had a much greater impact with more concisely edited lines.  The characters are also not overly distinctive, so I had to mentally juggle and remember who was who especially during the climax scene where numerous people were involved.  George Erikson, Louise’s father, is one exception due to his often explosive temper (not violent though, thank goodness).

Despite any foibles, I’d still recommend this novel, as it was a quick, intriguing read, was quite a bit different from the norm, and I love the fantastic pun/double entendre of the title.

9 thoughts on “Rest in Piece by B. W. Ginsburg”