It’s been too long since I’ve posted a macro so I decided to revive Macro Mondays on a biweekly basis thanks to a conversation I had with Pokeninja who runs the blog Nice Job Breaking It, Hero.  Sometimes doing things weekly is way too much to handle, but biweekly (hopefully) works out well.

I’m also going to try to organize the information on my macros in a better way.  In prior entries I would include the links to the original picture and quotes a bit haphazardly, but I’m going to attempt to take a cue from my State of the Reader posts and put all the information in a nice neat list afterwards.  I’m also going to make sure I caption whatever the quote is below, though my hope is it’s clear on the image. 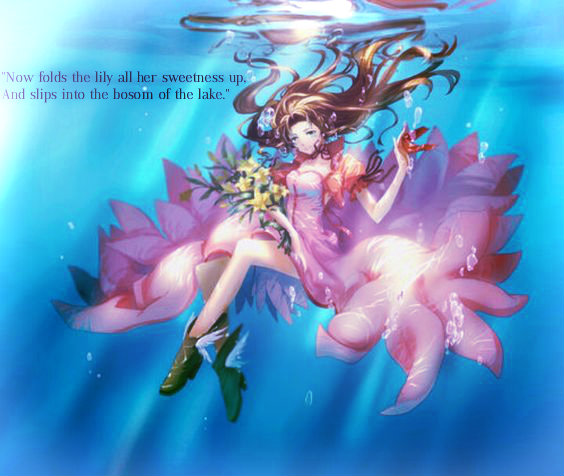 “Now folds the lily all her sweetness up, And slips into the bosom of the lake.”

I recalled my desire to make this macro while editing Chapter 8 of The Broken Rose. A piece sung by Laura Wright is where this poem is featured.  I  found the quote in the song then discovered by a quick google search that the original verse is by Alfred, Lord Tennyson.

The quote above struck me is strangely reminiscent of Aeris almost to the point of being eerily accurate, and there’s a line before it that creepily aligns with FFVII as well:

“Now slides the silent meteor on,
And leaves a shining furrow…”

Needless to say I’m working on a macro for the above, too, featuring exactly whom you’d think I would 😉

It was impossible to pass up this opportunity for a macro seeing how well the words aligned with the fated flower girl’s plight.  Lilies are not only the blooms she peddled, but arguably stand in as her symbol, as well, considering they’re associated with death.  Aeris is literally folded up and “slipped into the bosom of the lake,” so Tennyson, with absolutely no rational means to have this knowledge still managed to have his poetry reach through the ages and touch this poignancy.

Disclaimer: Neither the image nor the quote used are mine.  They belong to their respective creators.

2 thoughts on “The Lily in the Lake”