Sidequests and minigames are paramount for fleshing out and breaking up the main story of an RPG.  Not to say that a main story is monotonous if done well (a proper narrative will have its own breakups/reliefs from the often dramatic tale at hand), but SQs and MGs are a nice little diversion away from the mise en scene, and the latter could be considered meta-games as they’re games that take place within a game (or gameception if you will)..

I count a sidequest as anything that doesn’t have to be done in order to complete the game and/or something that isn’t necessary for the game’s narrative.  There’s definitely some grey ground here.  Not all of the weapons in FFVII need to be defeated, but there’s a great deal of narrative value to their inclusion and demise.

Without a doubt, my favorite minigame is Triple Triad, the card game from Final Fantasy VII. 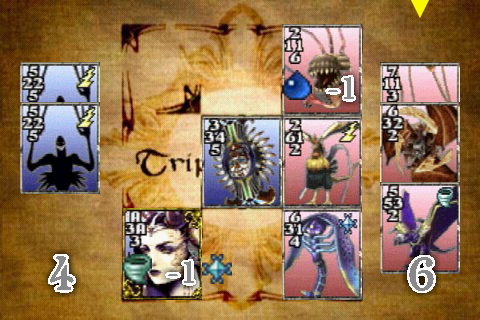 No seriously…I fucking LOVE this game

I love the strategy.  I love that you have to plan where you’re going to place even your strongest cards, and I don’t mind the Same, Plus, or any of the Wall rules.  I do detest the Random rule with a passion, nor do I like any games that aren’t Open.  You can get around the Random rule (if that’s the region you’re in) by modding all of your weaker cards, so only the stronger ones remain, and if you’re stuck in a region with Closed, that’s a sound strategy for that as well.

For Trading rules, I abhor Direct, since it’s often a crap shoot as to when a player will play a rare card (though sometimes the computer will give you a break and throw the card right where you need it, though you might have to sacrifice the card you use to do so. Strategy!), and if they stick it into an appropriate corner, you’re SOL.

There’s a great deal of resetting when playing Triple Triad, and if you ever want to play, always make sure you save first, because you do not want to spread the Random or Direct rules anywhere.  All rules are in place on the moon, which is where you can win the rare Laguna card.  I don’t even want to talk about how long that took.  Ellone is an expert player.

I think the last time I played, i had nearly all of the rare cards, and even if you mod them, you can still see that you had them in your collection.  I wish I could play this game outside of FFVIII.  Not that I have a problem playing FFVIII, but Triple Triad has transcended its origins, and I’d love just spend hours playing it on its own.  There’s a site for doing so, but I don’t think it’s active anymore.

I know there’s a particularly literate mage who prefers FFIX’s card game Tetra Master, which I enjoy, too, but I’m not as big on the more random nature of that game.  Though he’ll see, I’m not going to leave IX out in the cold…

For sidequests (I should try to think of one), the one that comes to mind is the Stellazio gathering in Final Fantasy IX.  I have a fondness for astrology, though I do maintain some skepticism about the stars themselves influencing your personality/life (I have seen personality differences in people born at different times and similarities in those born under a particular sign, but one, this is anecdotal, and two, I think the differences that exist could be due to scientific factors e.g. the weather conditions while you were in utero).  I’d love to see some peer-reviewed research on this), but I’m 100% a Taurus.  I use the horns to hold up my halo :p

I like the snippets of story that each piece contains feeding into the whole, and I love that it’s a riddle leading you the mythic 13th Stellazio, which refers to the 13th sign Ophiuchus, the Serpent-bearer. I would not have known about the 13th sign were it not for FFIX, which joins the ranks of other Final Fantasies such as VI and VII in teaching this Narcissist a thing or two.

What’s your favorite sidequest and/or minigame?  Let’s discuss in the comments!