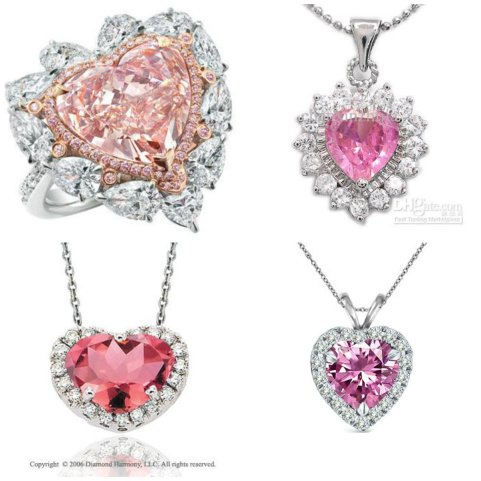 I couldn’t decide which pink, heart-shaped necklace I wanted to use either here or which one I now want to visualize for the story.  Prior to searching, I had a particular design in mind, but now that I’ve seen these, I’m left uncertain.  Sometimes visualization can bring more confusion than clarity.  Let me know which one is your preferred in the comments!

As declared in the progress report, I have started editing Chapter 9 after writing myself some extensive notes on how I want to proceed with not only this chapter, but the following.  Writers often write much more than they ever explicitly reveal, but they often use these shadow sentences to drive what winds up on the page.  It’s a way to avoid the dreaded “tell.”  You note your character’s fear of snakes then have them freeze at the sight of a serpent.  It makes the reader question if they have a phobia or if they’re assessing the situation.  Leaving some things up in the air makes for a more interesting read.  People can argue, debate and discuss and hope for more clues to be given.

I’m always wary to throw around the term “love” when it comes to any story.  In both life and writing it’s far better to show then just say words that fade into wind.  So by the time my characters do say them, it’s already been firmly established.  When the feeling starts is always amorphous just like in real life, but the speaking of it occurs long after it manifests.

Quote: A crack in the sky allowed light to fall so gleaming near Aeris’s throat.  Below the deep hollow framed by collar bones pulsed a pink diamond necklace.  It was shaped like a heart and bordered by smaller stones of similar type.  She fingered it, staring at the ghostly vision within the window pane.  It was one of a myriad, more than she could count, fashioned from finest jewels.

Besides some missed trophies, I think I can declare this game finished (unless they release some DLCs), so it’s time to write a review.  If I can work on it this week, I’ll post it for Final Fantasy Friday, though I’m in no way running out of questions for that.  In fact with every one I post, discussions lead to more potential ones.