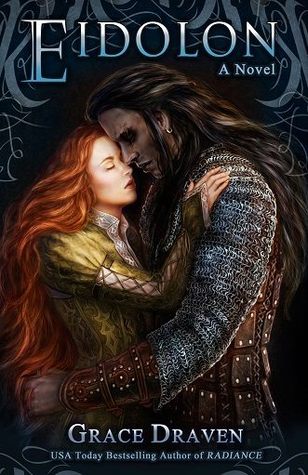 In a bid for more power, the Shadow Queen of Haradis has unleashed a malignant force into the world. Her son Brishen, younger prince of the Kai royal house, suddenly finds himself ruler of a kingdom blighted by a diseased darkness and on the brink of war. His human wife Ildiko must decide if she will give up the man she loves in order to secure his throne.

A tale of alliance and sacrifice.

It is honestly refreshing to read a story about people who are true leaders, who understand what it entails, who want none of the glory and are willing to except all of the responsibility and potential sacrifice that comes along with it.  Yet and still, they remain “human.”  Quotes since many of the characters are Kai, but their humanity and concern for whom and what they strive to protect are second to none.  It’s refreshing to both read about it in fiction/fantasy, added with bittersweet in consideration of real world events.

Brishen and Ildiko are thrust into a position neither of them would choose.  Due to his mother’s lust for power (and other things, but we’ll get to that), the Shadow Queen succeeds in nearly destroying her entire kingdom by opening a hole in a void of darkness to unleash demons onto the world.  These fiends or galla as the Kai call them care not whom they devour, and if left unchecked will eventually feast upon the world, but it’s even more corrupt than that.  Anyone they consume, they can mimic in order to lure their loved ones in.

When Secmis, the Shadow Queen, does this, she’s consumed and then it spreads from there, cleaning out the castle so that only the Crown Prince’s newborn daughter, her nursemaid, and two guards survive.  Their only goal is to make it to Saggara, the seat of the now infant queen’s uncle Brishen.

News quickly spreads to the Kai prince/duke and the duchess Ildiko, and the Kai’s highest religious leader, the Elsod, informs Brishen that not only is he king, but the only way to save his people is to become a Wraith King, eponymous to the series.  “The king must die” indeed and become a general of the dead as Aragorn did in Lord of the Rings.  Complicating this further is a truth that has guided and often plagued every monarch before and every one to come: a king must have an heir.  For Brishen and Ildiko, this is a huge problem.

When the prince was just a spare and Ildiko an unimportant noble woman, their politically arranged marriage became a blessing in disguise as they were perfectly matched.  There was no need for their pairing to produce any issue when Brishen’s brother, the Crown Prince, had an abundant brood, but now with all of them thought dead, Ildiko realizes she has to be put aside in order for the Kai kingdom to continue, and this is one of the hardest and most selfless sacrifices anyone can be asked to make. It causes a rift in her and Brishen’s relationship, but not for the obvious reasons.  He refuses to allow this, blinded by his love for her, and she has to be the rational one insisting there’s no other way it could be.  The Kai were willing to accept her as a duchess, but they won’t accept a human as their queen.

The second book in Wraith Kings is just as good as the first.  With their relationship established, Brishen and Ildiko just continue to prove that reluctant leaders are often the best kind.  Because they don’t want to job for mere power alone, but only for the power to protect those who need it.

There are a few subversions of common tropes.  Hamlet made the conniving, usurping uncle one popular, and The Lion King made it more modern, but Brishen would want nothing more than to see his niece ascend a throne he never expected and doesn’t want.  Whether that lack of ambition is due to having a human wife who can’t bear him children no matter how much they might try (and boy does he try in this novel, though I have some thoughts and predictions about that), he is not power hungry like his mother who has a creepy, disgusting, reverse Oedipal Complex concerning her son.  I mean when you’ve been consumed by demons, and even your shade offers to make you son a god so you can become his consort, I think even Freud would be speechless.

I am impatiently waiting the third book, which is supposed to come out sometime this year.  It can’t happen soon enough.  This is easily my favorite (original) paranormal romance series.