Day 23: A game sequel which disappointed you.

Even though I love knowing more of the back story, I was so pissed off by Aeris’s voice actor in Final Fantasy VII: Crisis Core that I didn’t even finish the game (I also know that CC is technically a prequel in the chronological timeline, but since it came out after the original game, it counts to me). 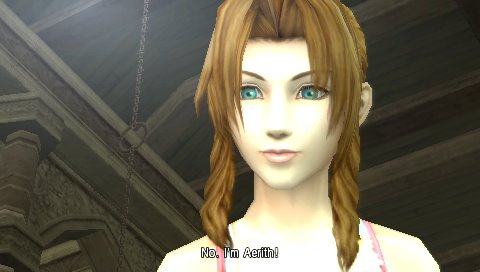 Omg who the hell cares?!

I wish I had enough words to express how much this irritated me.  She sounded like a complete airhead/ditz, and while I know she’s only supposed to be 17 in this game, Aeris always struck me as someone who would have an inkling of her own destiny.  She might be cheerful, hopeful, and optimistic, but CC made her into a vacuous, vapid, manic pixie dream girl fit to be Zack’s girlfriend, and that just sells her entire character short.  She’s arguably the most important person in FFVII since it’s her actions and sacrifice that saves the world, and the OG shows this by having her be the first and the last person you see in a brilliant bookend.

I enjoyed the gameplay in CC, but Aeris’s characterization completely ruined it for me, and it’s the main reason I put it down.  I may eventually watch a let’s play of it just so I can better talk about the happenings in FFVII as a whole, but I doubt I”ll ever play the game again, and I swear to god, if they fuck up her voice in the Remake, I will rain holy hell down on the world.

What sequel disappointed you?