I’m sorry.  You know I have to mention one of the most iconic scenes in video game history:

It’s epic for the fact that like Aeris, none of us saw that coming (I’m a terrible person), and the fact that to this day, the rumor mill spins with ways to bring her back and hopes that the Remake will allow it (I really hope it doesn’t).

I was also blown away by Midna’s reveal at the end of Twilight Princess: 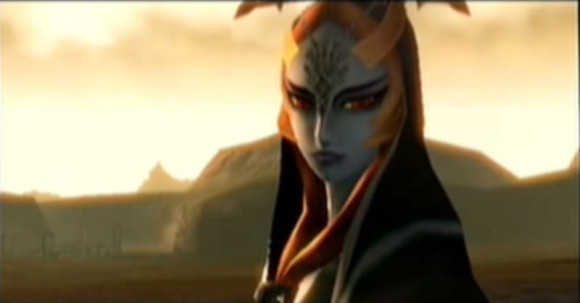 I was as dumbstruck as Link.  Though he’s ever the silent protagonist, I think his inability to speak was due to finding the Twilight Princess was even more beautiful than Princess Zelda (imho).  This one is more on my personal epic scale; though I’m sure many of you would agree with me about it, I don’t know if it will wind up in the annals of video game history like FFVII will.

Epic is a subjective term, though there is a cultural consciousness about it.  What one person might consider epic, another might think is mundane, while some things foster a general agreement   The original definition of epic pertains to a long, poetic composition usually centered upon a hero in which a series of great achievements or events is narrated in elevated style.  Going by this both Final Fantasy and Legend of Zelda could be considered epics in their own right, because what are these games but long compositions centered upon heroes where a series of great achievements/events are stylistically played out?  This definition extends to all manner of video games, so even though epic is a specific idea, what one considers epic can be both ubiquitous and intensely personal.

What video game scene wakes your epic sensors?  Do you go by the standard definition of the term or your gut emotion in this determination?