I managed to muddle my way through Chapter 1, defeat the Tiger L’Cie with Odin, and now I’m back at the academy after a long cut scene showing a meeting of the higher ups.  The coolest person there was obviously Dr. Arecia Al-Rashia.. 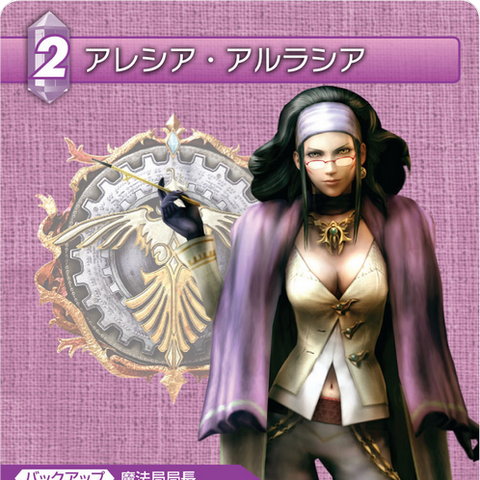 I have quite the lady boner right now, but I’m pretty sure she’s going to end up being one of those morally ambiguous if not downright evil characters, since she appears to be fulfilling Final Fantasy’s mad scientist archetype shared by VII’s Hojo and IV’s Lugae who both did utterly reprehensible things.  *spoiler* It doesn’t help that she’s Ace’s mother, so she’s more of a combination of Hojo and Lucrecia in one.  In the meeting it’s revealed the Agito Cadets were created by combining magic and technology,.*end spoiler*

The more I think about it, the more I realize Final Fantasy is more science fantasy than anything else.  Even FFs I-VI with their more  high fantasy setting have that element to them.  Hm, since IV-VI have that steampunkish vibe, could we then consider the steampunk subgenre to be a facet of science fantasy, as well?  (I’m posting this to the Book of Faces, as well…wish me luck.)

I still don’t like the battle system, but I think I’m close to the spot that Cheap Boss Attack told me about where I can pretty much bilk the system.  I also kind of wish they’d started the game at the academy instead of in the midst of battle to give you a chance to get used to the mechanics, but I suppose most gamers would be fine with that beginning.  I like the opportunity to get my bearings, but the start wasn’t that difficult in terms of battles.

For story there’s a shit ton of information thrown at you, and I’m not quite sure which nation has which crystal.  I believe Rubrum has the Vermilion Phoenix, but I have no clue which nation is White Tiger (obviously the aggressive empire, but I don’t know where they’re from), though I did find the White Tiger L’Cie’s constantly declaration of “This sucks” really amusing.

At least everyone is Final Fantasy pretty.

Progress: Outside the mountain path leading to Dragon’s Nest

For some reason my game didn’t save in the abandoned ship yard.  I really hope that doesn’t happen again.  I checked and double checked the last time I played.  I hate to have to do it all over again.

I made it to Kerwin village where the music has this sick, Irish badassery to it.

I’m guessing this is just the town music, though I don’t recall it being in Tulle, and I’m curious if each town has its own theme.  This one is called “Harvest” which seems appropriate.  According to a villager in this locale, there used to be a lot of dragons fifty years ago, but now there’s only one left.  Hm, sounds interesting and familiar.

I still need to get used to the job system, but so far it seems pretty simple.  Bartz is a Knight, Reina is a Black Mage, Galuf is a White Mage, and Faris is a Blue Mage.  Finally, the female characters aren’t consigned to healing!  They’ve evolved since Final Fantasy IV.  I’ve gotten to level 2 in the job class with all of them at this point.  I think I might get them to level 5 then switch the jobs around, since I’d be able to use what they learn on their other classes.  So far this is my favorite Final Fantasy out of the three I’m playing.

I’m not saying I got a little misty when you find out what happens to Emma’s mother, but I’m also not denying it if I did. *feel-o-copter out*

There’s a Mog King Raid this week where you can either play with the king or insult him.  Seriously…there are literally options for both of them.  I was able to beat him up until PRO, but he doesn’t attack you.  He just sneezes your characters away, eventually leaves, and you garner a ton of items including raid coins.  Then there’s Macalania Woods in the Vortex, too.  I managed to get to the end only to have my ass handed to me by the boss.  I should’ve taken a stronger sixth unit, someone who can cast ultima twice (hi Trance Terra), no using magic be damned (I just won’t get the 20 lapis bonus).  I’m pissed I didn’t get to keep any of my stuff.  Because there’s no continues, it’s not like I could just expend 100 of the blue gems and keep going *grumble*

I actually just finished this before this post, but I wound up Imprisoned.  There are four endings to the game, and I’m kicking myself now for checking out the door with the 3 on it instead of looking at the two additional puzzle boxes that appeared on the table.  I figured I could just go back.  Alas.  There’s also this door in the observatory that I never managed to open along with this other door with a star inside another room, and this old fortune teller box that I never activated.

Thankfully, the game allows you to “Change Your Fate.”  You can replay it again though you won’t have any hints; however, you do have the completed Craftsman’s Key made from the pyramid pieces, so you can pretty much go anywhere.  I’ll attempt to see the other endings, and I’m not ashamed to use the internet if I get stuck.

Oh my god, this game is fucking me uuuuuuuup D:  I don’t want to say too much, because you really need to either play or watch it.  I could never play this.  It’s absolutely terrifying, between the ‘creature” chasing you, the jump scares, and the dark, dismal abyss with the knowledge (?) that everything on the surface is gone.  I have many, many ideas/theories about what’s really going on, and they really hang a hinge on our own reality.

It doesn’t help that I’m currently reading a book by a neuroscientist about the brain, consciousness, and perception and how that three pound glob of jello in your skull literally makes shit up.  It also doesn’t help that I read an article yesterday about how reality could just be a simulation.  You know how we like playing the Sims?  What if we are the Sims to a reality outside of our own?  One day (if we don’t blow ourselves up or make this planet uninhabitable), it is conceivable that our species will create a virtual world with sentient beings who have consciousness, but don’t know they’re in a virtual world (the real kick in the pants is even if they figure it out, we’d either have no way of telling them or no inkling to do so.  If it’s the latter, our own “programmers” are total jackasses), and if they develop enough sophistication, it’s possible they, too, will create a virtual world inside of their virtual world, which is inside our virtual world, which may be inside another virtual world.  This could go on forever with none of the people on the inside being the wiser.  I think there was a Rick and Morty episode about this, along with a Star Trek: TNG.

After this is posted, I”m watching the next episode…while there’s still light outside.

Who knew you could talk to dragons?  Unfortunately, doing so means you miss out on the best weapon for Alis in the game, so it’s either kill a dragon or miss the Laconic Sword, which the villain Lassic is said to hate.  He’s probably bitter that it begins with the same letter as his name.

It is really weird that you don’t really see the issue with Lassic’s rule.  Besides the storm troopers (no really, look up Phantasy Star and find a screenshot of one of the towns.  They’re storm troopers) requiring you to have a passport or whatever, you can pretty much travel freely around the three planets.  What is Lassic doing that’s so terrible?  Well, he is responsible for the death of Alis’s brother, so there’s that.

I will also be watching the just posted episode of this tonight…after SOMA, because I”ll need something that’s not scary afterwards.

The final battle is about to begin.  Shepherd talked to all of the companions she made (the ones still alive), and now she’s prepared to speak to Admiral Anderson and start the final show.

I’ll definitely be writing a bit about this trilogy once I’m done with the LP, and I’m excited to play Andromeda!

We finally set up my Xbox 360.  It has a little antenna lol.  So cute.  I haven’t booted it up yet, but I’m going to attempt that this week.  At least pop in Viva Pinata and give that a play.  Since I’m already playing three RPGs, I don’t really have time to start another.  I should make a play order list like I have my reading order list *puts it on her master list…listception*

I need to start keeping track of my games as diligently as I do my books.  I do have Grouvee, and I do try to take down who recommends things to me, but I’m a lot more sloppy with the games than I am with the books.  I’m treating them like the bastard medium many erroneously say ;_;

It’s also the 4th of July, the most American holiday of them all quite literally.  It’s America’s holiday lol.  Some people are calling it Brexit 1776.  I want to kick those people.  If I weren’t super hungry, I could probably explain why that irks me, but the hunger pangs are fogging up my brain, so I’ll just say I hope you all had a Happy 4th of July or Canada Day for my northern friends ♥