Longer ago than I’d like to admit, I posted a Final Fantasy Friday about Fashionistas and Fancy Fellows, in which I detailed whom I thought was the dapperest dresser of them all.  It was one half of a pair of questions, and I promised to fulfill the other side of the promise the following week.  I didn’t do it then, but I didn’t quite forget and figured I’d pull the question out a week when I was too busy or too tired to think up something more complicated.  I’m feeling a little under the weather.  The past two days have been extra stressful, and my throat is a bit sore, which could mean this asthmatic is about to develop a chest cold, so now is the perfect time to pose an easily answered question.

Who is the worst dressed Final Fantasy character?

Before I answer this, let me quote from the site I also linked in the
Fashionista” post, because it’ll give you a major clue about whom I’m about to lay the fashion smack down upon (FYI – don’t click that until you’ve seen my answer if you don’t want it spoiled).

“This outfit is preposterous.  It’s a send up of ’90s urban fashion, scrubbed clean for an appearance on The Lawrence Welk Show.  [They] look like [they’re] ready to deliver a sanitized performance of “I Left My Wallet in El  Segundo,” complete with clarinet accompaniment and bubbles floating by. “

I cried.  This is not even the best the site has to offer, though I disagree with the blanket statement about all Final Fantasy characters.  The worst dressed person is clearly Tidus from Final Fantasy X. 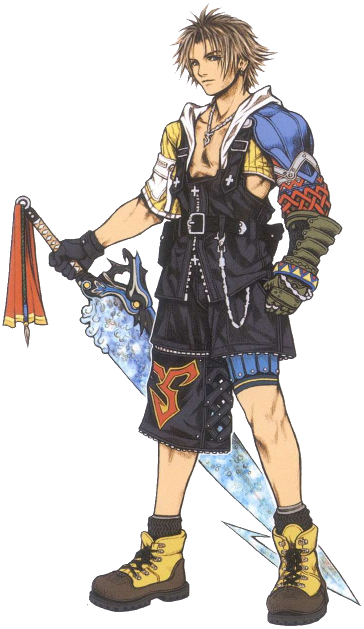 Seriously…what the fuck is this?

As a joke one time, my husband removed the pant leg from a pair of bondage pants so it looked like the above, and I threatened to divorce him.  I have no idea what the designers were thinking, and can only imagine the words “fantasy-esque fanny-pack” were blurted out as a joke that someone took too far.   Wakka’s outfit is just as ridiculous, so at least there’s some solidarity in senselessness amongst Blitzball players.  What’s funny is I find Lulu and Auron’s outfits to be bad ass; Yuna’s is the fusion that TIdus’s looks like it attempted, both elegant and functional. Even Rikku, despite that gratuitous “strip” introduction scene isn’t dressed any worse than FFVII’s Yuffie, and hell, they’re living in Waterworld,so you gotta be prepared to swim.

*sigh* Well, it’s Final Fantasy.  At least we know the villain will be well-

Is it safe to say that FFX has the worst dressers in the franchise?  This is not a knock against the game, which I thoroughly enjoyed.  I guess when technology is considered evil and transportation is only by ship on an ocean ruled by an evil leviathan, non-ludicrous clothing becomes the least of your worries.  Stay away from the summoner?  Stay away from the sewing machine.

Who is your top pick for worst dressed? Do you agree with me about Tidus?  Wakka?  Seymour?  Which character commits the most egregious fashion faux pas for you?