One more person to level up to 99!  It’s been over a month by now I know, but once I finish Machina, I’ll be able to continue the game and pwn anybody who gets in my way

I wrote up the Karnak instructions; now I just need to implement them.

So I lied about my progress as a Rank 33; I’m still at 32.  It had been a while since I played, so I’ll have to be forgiven for forgetting.

The game did a major update, which of course caused major problems.  I couldn’t even play all last weekend, and the carousel of options at the bottom was greyed out except for World, though selecting that would make the game crash.  That’s my biggest complaint for FFBE; it’s very unstable.  There was a mission a while ago that I couldn’t even do because it would crash and burn while you were in the midst, and unlike other scenarios, when you went back in, it didn’t start you were you were.

There’s this Daily Quest thing now that I spent a few hours on.  They have these Rookie Quests, which mostly consist of simple tasks you’ve probably already completed if you’ve played the game for any length of time like defeating Ifrit/Shiva, completing some dungeon, or even just equipping a weapon or armor. Thankfully, you can redo it and still collect the reward, which is pretty hefty like 100 Sacred Crystals, though what I really (still) need is some Litrock.

I wasn’t too fond of the current Vortex mission for the Autumn Harvest or something like that.  It’s a maze that you have to complete in three minutes including defeating the mermaid boss.  I already have a timed mission in FFV thank you very much, so I’m not sure if I’m going to re-attempt this. 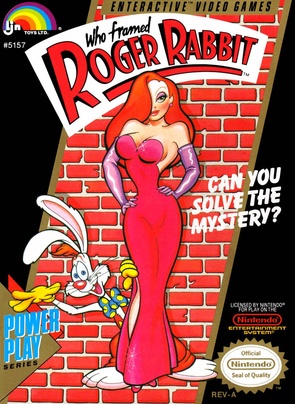 Is this a good game?  No, it is not. Did it bring back some nostalgic feels?  Yes, it did.  I remember renting this game quite a few times, because the mystery of it was intriguing, and we always wanted to know how to beat it and what the ending was like.  Well, the ending is disappointing.  It’s one of those “Congratulations!” that is the biggest cop out, and the overarching gameplay itself leaves much to be desired.  You play as Eddie Valiant with Roger Rabbit in tow.  Roger doesn’t do anything except act as a hostage for the weasels when they catch up to you, prompting Eddie to try responding with the correct punchline to a given joke in order to make them laugh hard enough to release him.  Sometimes, the “crazy” weasel will show up when you attempt to enter a building, and Eddie has to punch him enough times hard enough to knock him away.  Yeah…your main weapon is your fists, and Eddie can “wind up,” which looks like this ridiculous jig back and forth.

The game mostly consists of you guiding Eddie from building to building looking for items that can help you with your ultimate quest to find the pieces of Marvin Acme’s will.  You can ask passersby for help, and they’ll either tell you they can’t help you (which is useless information), that the building you’re at is empty, or that you should search it.  The items you find come in various degrees of usefulness.  There’s an exploding cigar, which can be used as a weapon; cheese, fish bone, and meat, which can mollify rats, cats, and dogs respectively; a whistle, which can call Benny the Cab whom you eventually have access to; a portable hole, whose use I don’t remember since the LPer didn’t use it; a password, which is used to get into the Ink and Paint Club; a rose, which you use to talk to Jessica in the Ink and Paint Club; a rattle, which you use to pacify snakes; spring shoes, which you use to jump; a wallet, which you use to buy things; and a baseball, which you use to distract the weasel guarding Judge Doom’s lair.  There might be more, but I can’t remember.

There are three separate areas: the regular city, the outskirts/country, and Toon Town.  Pieces of the will are located in all three locales with four in total. Exploring the areas on foot is crucial, since the Benny can only drive on the road.  Throughout the game, you’re being chased by the weasels who’ll either pursue you in their big, black car or on foot, holding Roger hostage as stated above.

While I’m glad I finally saw the game in its entirety, Who Framed Roger Rabbit? falls into the typical pitfall of games made from movies.  It really doesn’t stay true to the script with either characters absent, not even remotely fulfilling their roles, or Eddie not doing much of anything similar to the film.  There are some beat points (like his visit to the Ink and Paint Club, Benny the Cab, though he has no lines whatsoever), but nothing cohesive.  It’s essentially an hour long fetch quest where you look for the pieces of the will and fight Doom, which really have nothing to do with the other, nor was there any mention of the Red Car aspect.  The whole reason Doom was able to sacrifice Toon Town for his freeway scheme was because Acme’s will was missing, leaving the fate of the land up in the air.

At the end of the game, it’s sadly hilarious how Roger goes from bumbling along beside you to be tied up with Jessica in front of the dip cannon. I understand it’s an 8-bit game from the NES era, but at the very least you could have it that at a certain point you go to the club to find that Jessica is missing (and Roger is kidnapped/disappears).  All she does anyway is give you hints about where to find the will, so I guess she’s useful?

The only really good thing about the game is the music.  The City Theme has a jazzy, ragtime sound to it that’s easy to listen to while you’re on your most futile searches, and the two tunes in Toon Town are extremely catchy.

I can’t say the game is a total waste.  If you like puzzle/clue adventures with some action fighting, it’s only about an hour to beat, though I could see it becoming tedious with how many buildings and caves you’d have to search, because it’s always the same thing.

I’d give it 2.5 stars and I hope you liked my mini-review!

Would you kindly?  WOULD YOU KINDLY??!!!  Holy shit…that’s all I can really say.  I’m sure more surprises are to come.

Nothing to report.  At least nothing I can think of…or talk about 😉