We all know what time of the year it is, and as a bonus we get a Friday the 13th in October to make the spookiest season even spookier.

Now, I know this is the second weekend of October.  I never claimed to have a good sense of time, but for the rest of the month, I’ll gear my questions more towards the eerie and off settling aspects of my favorite franchise.  With that in mind…

What is the scariest monster/enemy?

Final Fantasy boasts quite a few creepy creatures in its extensive history.  There’s the Final Fantasy VIII’s Fake President (…I want to say something so badly) after he reveals his true form. 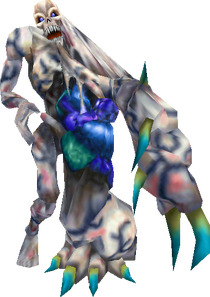 Also known as Gerogero, which I’m not even sure how to pronounce

Then there’s that monster you sometimes run into in the basement of the Shinra Mansion in Final Fantasy VII.  Now according to the internet (which I just scoured), TSN is delusion and this creature doesn’t exist, but I remember running into this terrifying fucker in the first screen of the basement in the same hallway as Vincent’s room.  You don’t find it every time, but it has a similar appearance to Gerogero, but somehow scarier.  I wish I could remember what it was called, but when I get to FFVII in my replay, I’ll garner some courage and see if I can draw it out.

These ghoulish goons are pretty offputting, but the most terrifying monster in the Final Fantasy franchise can only be an eldritch abomination ripped straight from the nightmares of Lovecraft, trickling down from the cold stars above….

I’ve waxed poetically about this entity (which I refer to as “it” never “she”) in The Seventh Is the Darkest and Heart of Darkness.  Final Fantasy has its share of aliens, and many of its characters can claim that lineage (albeit usually only half), but it’s what’s not revealed about Jenova that adds to its horror.  It never speaks.  It never divulges what it wants.  It just mutates, destroys, and consumes.  We don’t even know the nature of its true form, it’s appearance arguably being a corpse-like mockery of the last person/Cetra who came in contact with it before it was sealed away.  It’s also possible it has no true form, and, like The Thing it shares many attributes with, can only mimic appearances.  If you’re not as creeped out as me, that’s perfectly fine, but think on this: how often, in not only game scenes but music, do you hear the beating of that hideous heart?

What monster/enemy is your go to for creepfest?  Let’s talk spooky in the comments!