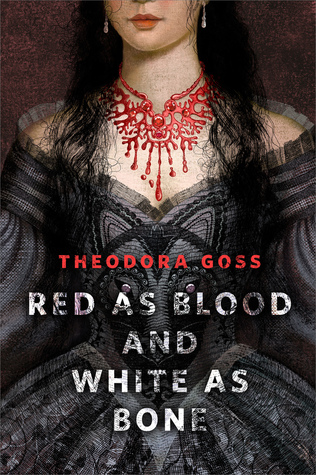 Red as Blood and White as Bone by Theodora Goss is a dark fantasy about a kitchen girl obsessed with fairy tales, who upon discovering a ragged woman outside the castle during a storm, takes her in–certain she’s a princess in disguise.

The day you find out the fairy tales aren’t true is the most painful revelation of childhood.  It flows along the same continuum of the Santa Claus and Easter Bunny myths, though those can be more readily accepted as children’s stories with their more mythical elements (among other things).  Like my previous review, Red as Blood and White as Bone is a fairy tale retelling, but unlike Shadows on Snow, Ms. Goss’ retelling seethes with the darkness of reality and broken dreams.  While fairy tales obviously have magic, there are still things that could ostensibly take place in the real world such as dispossessed princes and orphans of unknown royalty.  Who among us can claim to have never wished for such a special status?  To be more than what we’d been told we were?  More than we could ever dream?  This is the paradigm the author shatters vicariously through Klara, the kitchen girl who believes she’s found a lost princess.

Like Klara, we want to believe the ragged woman the scullery maid finds is secretly royalty, and while it is never explicitly stated that she is not, those of us familiar with reality know the truth.  This doesn’t lessen her true nobility in the slightest with what she’s willing to sacrifice in order to achiever her ultimate goal, and I like how Goss leaves it ambiguous in the story even as it moves forward into more modern and recognizable times.  The tale of the two wolves within the narrative is more than likely a metaphor; however, there remains that small grain doubt, no matter how implausible,  that such a story exists within our reality.  It’s not so much the  reveal of the “princess’s” true purpose that is soul crushing, it’s that it causes a chip in the porcelain of fairy tales that once cracked has no choice but to crumble, leaving our belief in the dust.

And then, for the first time, I began to cry. Not for…but for the story. Because it had not been true, because she had allowed me to believe a lie. Because when Greta said she was… suddenly I had seen life as uglier and more ordinary than I had imagined, and the realization had made me sick inside.

Red as Blood and White as Bone isn’t a dark fantasy because of some demon lord, cosmic entity, or Gothic mien.  It is dark because it is real with the veneer of the fantastic on top, and there is nothing more morbid or sorrowful than the reality we live in, when that glittering shroud is ripped away to find the truth festering beneath.