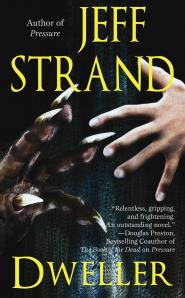 When Toby Floren was eight years old, he discovered a monster living in the woods behind his house. A ghastly, frightening creature with claws, fangs, and a taste for human flesh. As he ran out of the forest, Toby felt that he’d been lucky to escape with his life.

Years later, Toby finds comfort with the creature. It’s his own special secret–something that nobody else in the world knows about. Somebody to talk to. Somebody to confide in. Sure, Toby has concerns about his own sanity, but really, what boy wouldn’t want to be best friends with a monster in the woods, especially if he’s being tormented by bullies? The creature, who he names Owen, may be the answer to his problems…

From Jeff Strand, the author of PRESSURE, comes the story of a macabre, decades-long friendship. A relationship that will last their entire lives, through times of happiness, tragedy, love, loss, madness, and complete darkness.

I almost gave up on this one (even though it’s pretty much like Harry and the Hendersons…if Harry was a flesh-eating monster).  There was a lot of bullshit victim blaming and bullying that was played off as “just the way it is” or “boys will be boys.” *gag*  One of the greatest follies is the deep set idea that if you’re being bullied, you need to handle it yourself.  It’s a core tenet of many 80’s and 90’s movies.  I mean, there’s literally a series called Revenge of the Nerds (which has more problems than just this concept) where reciprocity is the name of the game.  It cultivates an almost hazing culture where children are expected to “take their lumps” because of the falsehood that it “makes you a better person” (whatever the fuck that means), but the fact of the matter is, it’s okay to go to an adult if you’re dealing with that.  That’s literally their (or I suppose our) job: to aid and educate the younger generation.  So this idea:

But there was a code of honor at Orange Leaf High: you didn’t rat out your peers.

is horse shit.  There’s no honor in it, BUT given the era this story occurs in (the 80’s/90’s), it’s an understandable sentiment.  Once I put myself in that place,  the vibe of the writing began to resonate with me, and I realized a great deal of my reluctance had to do with being able to identify with the bullying Toby endured far too well.

Dweller is about a weird, lonely, potentially disturbed, and bullied child whose only friend is a horrible, man-eating monster, which remains true when he grows into a consistently rejected and downtrodden man.  The creature, whom he names Owen, is the center point of Toby’s lonely life, and he fosters an often disturbing relationship with it (no, not like that), which includes luring his bullies into the forest where it waits.  This method of disposal doesn’t always go the way Toby wants, and he’s forced to keep deeper and darker secrets.

Despite some foibles, Dweller is the most realistic story about a man and a monster I’ve ever read.  Toby’s mental health issues have a solid foundation in his lonely childhood, and the situations he and Owen find themselves in could be easily duplicated in reality.  This is not a story for the squeamish, but if you like to pity the monsters, the novel gives ample opportunity for just that.

6 thoughts on “Dweller by Jeff Strand”