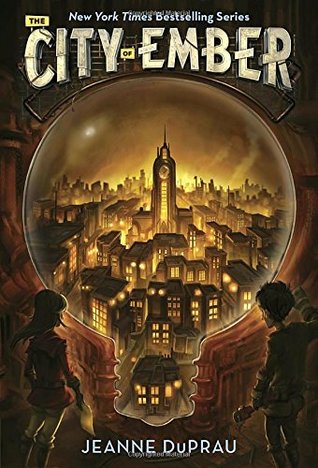 Many hundreds of years ago, the city of Ember was created by the Builders to contain everything needed for human survival. It worked…but now the storerooms are almost out of food, crops are blighted, corruption is spreading through the city and worst of all—the lights are failing. Soon Ember could be engulfed by darkness….

But when two children, Lina and Doon, discover fragments of an ancient parchment, they begin to wonder if there could be a way out of Ember. Can they decipher the words from long ago and find a new future for everyone? Will the people of Ember listen to them?

“But what if they don’t find them? What if they never come out again?” “I think they will. People find a way through just about anything.”

The City of Ember is a marvelous example of the necessity of a prologue in some cases since it lays the foundation of the story to follow: how Ember came to exist, created by the mysterious and long dead Builders to harbor humanity from some unknown disaster two centuries ago.   The only record they left of their existence was a timer box set to open in 200 years with instructions therein.  Each mayor of Ember was supposed to safeguard the vessel, passing it on to their successor when their time came to an end, but as things often go, the vital information was lost ad now Ember is dying.  Food is growing scarce and famine is imminent, but even more dire is the instability of their aging generator, because if it fails, Ember will go completely dark.

Like mid-grade novels go, the protagonists of of the book are two preteens Lina Mayfleet and Doon Harrow with the curiosity, ingenuity, and daring to both investigate what’s really going on and defy the corrupt authorities trying to take advantage of the situation.  When an Ember child turns 12, they’re given a job by random lottery, which is a terrible way to pick an occupation, since they could perform this duty for the rest of their life.  What seems an unfortunate turn for our two protagonists winds up working out since each obtain the others desired job (for the most part), and they’re able to switch.  Lina becomes a messenger and Doon is assigned to the Pipe Works, which maintains the hydroelectric generator.

Doon soon finds that no one actually knows how the gigantic machine works; they just know how to maintain and minimally repair it.  While everyone is terrified during the blackouts when absolute darkness falls, there are no contingency plans on what to do if the generator permanently fails.  They’re all stuck in this cycle.  To them Ember is the only light in a dark world.  While they know it was built since they know of the Builders, very few people question where these elusive entities came from and how the city came to exist in the first place.  This makes the insights of one character Clary (who might have been named for her “clarity” of sight) about the life that sleeps in the beans she cultivates all the more profound.

“What I mean is,” she said finally, “something is going on that we don’t understand. They say the Builders made the city. But who made the Builders? Who made us? I think the answer must be somewhere outside of Ember.”

Surrounding Ember is the Unknown Region, which is where they throw their refuse and (a bit disturbingly) their dead after they sing the Song of Farewell, and the only person who dared to traverse into that darkness came back with PTSD.  So when the ancient instructions are discovered, Lina and Doon know it’s the last chance their city has.

Stories like this make one think of all we take for granted.  If knowledge isn’t passed down, if history isn’t recorded, imagine how much would be lost.  If you were born, lived, and died in darkness, you wouldn’t know anything else.  This integral point creates a major irony in that we (the readers) know there’s an outside world, but the people of Ember don’t even realize they’re underground.  There is no “underground” because there’s no above ground, and not only have you never seen the sky, you don’t even know it exists just like a fish doesn’t know it’s wet. The world is made of darkness, and Ember is “the only light in a dark world,” but of course that light is fading, because it was never meant to last this long.

DuPrau has essentially recreated Plato’s Allegory of the Cave for younger readers.

The inmates of this place do not even desire to leave their prison, for they know no better life. The prisoners manage to break their bonds one day, and discover that their reality was not what they thought it was. They discovered the sun, which Plato uses as an analogy for the fire that man cannot see behind. Like the fire that cast light on the walls of the cave, the human condition is forever bound to the impressions that are received through the senses. Even if these interpretations (or, in Kantian terminology, intuitions) are an absurd misrepresentation of reality, we cannot somehow break free from the bonds of our human condition – we cannot free ourselves from phenomenal state just as the prisoners could not free themselves from their chains. If, however, we were to miraculously escape our bondage, we would find a world that we could not understand – the sun is incomprehensible for someone who has never seen it. In other words, we would encounter another “realm,” a place incomprehensible because, theoretically, it is the source of a higher reality than the one we have always known; it is the realm of pure Form, pure fact.

What makes this novel unsettling despite its mid-grade status is how realistic it is in mien.  While I’m happy the author didn’t go with the trite “all adults are useless and/or evil” cliche, there are definitely ones who fit that mold, but Lina and Doon often go to the people they trust (which includes Doon’s father), which is good for younger readers to see.  As power outages increase, food shortages worsen, and people grow sicker, there are still those on the higher tiers vying to snatch their own.

There is so much darkness in Ember, Lina. It’s not just outside, it’s inside us, too. Everyone has some darkness inside. It’s like a hungry creature. It wants and wants and wants with a terrible power. And the more you give it, the bigger and hungrier it gets.

This opening novel to The Book of Ember series was wonderful, and I disagree with the critiques about “over explanations” and how Doon was a “flat character.”  He comes off as a quiet, introspective, and curious boy whose interests are a bit different from the rest of his schoolmates.  Him and Lina get along because she likes problem solving and doesn’t just brush off information.  If anything Doon follows Lina’s lead since he can become lost in his introspective and introverted thoughts, but his groundedness helps level her out and keep her from rushing head first into danger.   Both of them show how important critical thinking is, and there is zero romance.

The novel is written for elementary to middle school children.  I don’t think adult reviewers always consider to whom a work is directed before they comment (e.g. some of the Nintendo Labo critiques I’ve heard).  The book also still leaves quite a few burning, unanswered questions even as more information is dredged up, the integral one being “What dire threat happened 200 years ago that prompted the Builders to construct an underground city?”  Was it a nuclear strike, so our own misdeeds?  Or was it a meteor/natural disaster?  It would have to be something that would leave the earth uninhabitable for two centuries, and if this question gave me something to think about, it would certainly tickle the minds of younger readers.

The names of the main characters are also of note.  Lina’s surname is “Mayfleet,” and she loves to run fast and becomes a messenger (something the mayor in the movie mocks her for in regards to her last name).  As for Doon, I’m unsure if DuPrau meant this for a reference, since it might be too obscure and mature for a younger audience, but Doon Harrow sounds almost exactly like Dunharrow, a refuge of the Rohirrim fortified against attack in The Lord of the Rings.  I would’ve included the reference and the link regardless, but the fact that it’s a literal refuge from attack in Tolkien’s world and the character of Doon in DuPrau’s is trying to save the underground city that was built for the same reason gives me pause.

The novel is not without its foibles though.  As fore mentioned, the “job lottery” is pretty nonsensical, considering Ember should utilize its resources in the proper places instead of leaving it to chance.  This problem is amplified in numerous aspects of the Builders’ great plan.  While I understand not wanting the generations who would live and die underground mourning the earth they’d lost, it makes little sense to not retain the knowledge somewhere, nor was it prudent to have only one person (the mayor) be responsible for the box.  Dire times call for desperate measures, but if they had time to build an entire underground city, they had time to stock it with some integral books about the outside world.  These could be entrusted to a responsible party, too, so that when humanity emerged, they wouldn’t be starting from zero (the last novel does address this, but still has the issue of having only one copy).

There’s been a movie made of the book.  It passed under most radars, though the full version is available  on YouTube.  From screenshots I can see that Doon looks precisely as I imagined him and Lina’s not too far off either.  Also, the city of Ember looks a great deal like Midgar, which is always enough to hold my interest.

I just took an hour and a half to watch the movie.  It was pretty good.  It kept the spirit of the book even if it did change some plot points and characterizations, the latter of which I’m more annoyed about.  I might do a book to movie comparison post at some point.