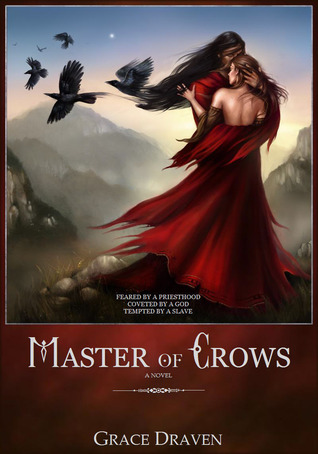 What would you do to win your freedom? This is the question that sets bondwoman, Martise of Asher, on a dangerous path. In exchange for her freedom, she bargains with her masters, the mage-priests of Conclave, to spy on the renegade sorcerer, Silhara of Neith. The priests want Martise to expose the sorcerer’s treachery and turn him over to Conclave justice. A risky endeavor, but one she accepts without hesitation–until she falls in love with her intended target.

Silhara of Neith, Master of Crows, is a desperate man. The god called Corruption invades his mind, seducing him with promises of limitless power if he will help it gain dominion over the world. Silhara struggles against Corruption’s influence and searches for ways to destroy the god. When Conclave sends Martise as an apprentice to help him, he knows she’s a spy. Now he fights a war on two fronts–against the god who would possess him and the apprentice who would betray him.

Mage and spy search together for a ritual that will annihilate Corruption, but in doing so, they discover secrets about each other that may damn them both. Silhara must decide if his fate, and the fate of nations, is worth the soul of the woman he has come to love, and Martise must choose continued enslavement or freedom at the cost of a man’s life. And love.

“What nobility is there in being a false god’s puppet?”

Grace Draven has a habit of writing stories with the same paradigms as FFVII and ASOIAF.  The titular character is being seduced by an evil god with dark promises?  Sounds fantastically familiar.  He’s also a powerful dark wizard?  Sounds a great deal like Song’s Three Eyed Crow.

The novel is slow to start, but the premise was intriguing enough to keep me going.  The blurb obviously gives away that Silhara and Martise fall in love, but it was still a pleasure to see how it all unfolds.  Once Martise drops her persona of servitude, her wit and tongue are whip sharp, which is a perfect match for Silhara’s snarkiness.  My favorite character, though, is probably Gurn, the wizard’s giant, mute servant, and his addition highlights another positive factor Draven imbues into her female characters: they’re always kind and respectful to servants.  Since Gurn uses sign language to speak, Martise learns how to communicate with him in that way, both surprising Silhara and making him wary.  Her finding out he’s been chosen by the dark god will spell his doom, and allies she has will make that task easier.

A great deal of this novel is cat and mouse with both Silhara and Martise playing both roles.  She desperately wants her freedom from the cruel priest of the Conclave who owns her commission, and Silhara desires nothing more than to rid himself of evil god’s influence.  Since it manifests as a sort of “plague star” in the sky outside his bedroom, the dark wizard finds this much harder than anticipated.  Of course things become more complicated when he and Martise start having a sexual relationship and eventually fall in love.  It was a nice change of pace to see that happening first to be honest.  So many romance novels ensure the characters have feelings for each other, but it seems more realistic to have that grow out of intimacy than the inverse.  Draven does pull the typically trite “the female character isn’t initially seen as beautiful,” but she has a voice that could make cream from dirt.

Besides some fore mentioned cliches, this was a witty, refreshing novel like all of the others I’ve read from Draven.  She is phenomenal at chemistry between disparate people and the witty repartee that follows.  Though Master of Crows wasn’t my favorite of her books, it was still well worth the read, had extremely high stakes, and I plan to continue the series.