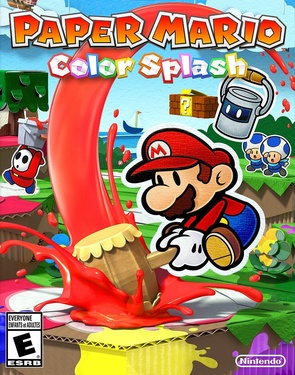 I’m overjoyed the series has returned to turn-based battles, but I immediately agreed with the critiques about the battle system.  Encounters require Mario to use both cards and paint to attack, and while neither paint nor cards are in short abundance, the colorization seems like an unnecessary addition.  While I understand why paint would be involved, since it’s plays a huge role in the game’s narrative (if you couldn’t tell from the cover), I think requiring a card for every single move is a bit excessive.  Basic maneuvers such as using the hammer or jumping shouldn’t require a consumable, since those are just Mario’s staple abilities.  I’m not promoting the banishment of the card system in its entirety, especially since there’s a major mini-game/side-quest involving Roshambo Temples (also I seriously thought Roshambo only referred to the South Park definition and not merely Rock, Paper, Scissors; look it up…), so having cards, which are also paper of course, is a fitting mechanic for the series.

I also felt the paint portion of the battles could’ve been omitted as well.  One of Mario’s main objectives is to re-paint the areas and characters left colorless by plot (seriously).  You’re even given a percentage of what’s been completed when you leave an area.  Paint in battle serves to make your hits stronger so long as you time them right, but some cards come pre-painted.  It’s too busy.  You have to try to paint the card enough to take out the particular opponent then you also have to make sure you time your attack correctly; however, even if you do the latter, if you didn’t use enough paint, you’re not going to do enough damage, and if you use too much, it’s just overkill.  Recall these games are also geared towards the younger crowd, and I could see its targeted demographic becoming annoyed and bored with it fairly quickly.

Mario games have been out for over 30 years now, and the creators love to play with that fact by throwing meta-commentary and references to older Marios into their stories (there was a literal Super Mario Bros. 3 board you could enter in one of the later sections).  Most of the characters are Genre Aware if not entirely Genre Savvy, and that almost makes up for the fact you know the princess is going to be kidnapped…again.

All that being said, I love Color Splash’s narrative and the mechanic of returning color to people (er, Toads) and objects with Mario’s paint hammer.  As in the games before, this installment has charming characters; a witty ally in Huey, a sentient paint bucket; clever dialogue; Parental Bonuses; an engaging story; wonderful music; and a wide world that uses the game’s mechanics in brilliant ways, all while remaining internally consistent.

Koji Kondo outdoes himself again, showing his genius in writing perfect and variously themed songs for Mario games.  This one sounds like a lusty pirate shanty, which according to Oliz (the Let’s Player) has similarities with music in Final Fantasy Crystal Chronicles.

And this is a perfect eerie circus melody.

I enjoyed how you could talk to some of the “enemy” characters with a most poignant example being a Shy Guy on the Sunset Express whom Mario ends up fighting later.  The SG actually predicts this will happen, but is resigned to the situation as his lot in life.  After Mario trounces him, the poor fellow brings up their prior conversation before dissolving into oblivion.  That was actually quite sad.  It’s like this game has gone out of its way to portray the plight of the Shy Guys as mere grunts in Bowser’s army (only a step higher than the goombas).  A good portion of them have no ill will towards Mario and crew, but they don’t have a choice in the matter.

For the end of the game.

It was extremely clever to have such a paradigm in this game given that the King of Evil himself was thrust into a situation not of his own choosing.  He just wanted a rainbow shell, but wound up swirling the paint and turning it black, and I really, really hope this wasn’t some supposed metaphor about how being gay can turn you evil (the rainbow is a major symbol of the LGBTQ+ movement), though I think this potential issue pales in comparison to the paradigm that black paint is specifically bad, ugh.  This is not only more trite than the princess’ constant abduction, but far more dangerous in implication, especially considering it was the black paint that drove Bowser to commit his nefarious deeds in this iteration.

While some  will insist “It’s just a game!” and “Stop over-analyzing everything,” unconscious biases do exist and they do affect the way we treat people.  The paradigm of black being bad and it’s dichotomous opposite of white being good is ubiquitous throughout storytelling, and while of course there are other reasons to fear darkness (e.g. night, the unknown, death, etc.), the idea has most certainly affected people with darker skin, so my critique is neither unwarranted nor have I spared my favorite Final Fantasy VII from the lash with my thoughts about the White Materia versus the Black Materia, but that discussion is for another time.

Though the fight mechanics are a bit different from other Paper Marios, I love the return to turn-based mechanics, and I would definitely play this despite my battle system critiques.  Unfortunately, it’s only currently available on the Wii U, so I’m hoping Nintendo is both wise and generous in making the Switch soon.  The story is excellent, the dialogue is well written and witty, and besides the typical Mario clichés (kidnapping the princess and whatnot, as well as the more dangerous critiques I discussed above), I loved Huey the paint can, and all of the side quests were both engaging and rewarding.