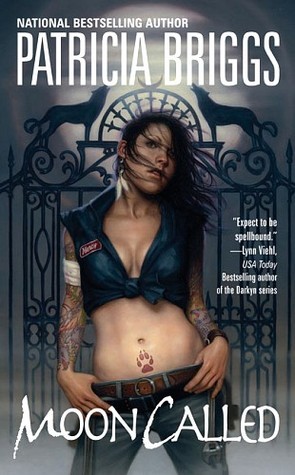 Mercedes Thompson, aka Mercy, is a talented Volkswagen mechanic living in the Tri-Cities area of Washington. She also happens to be a walker, a magical being with the power to shift into a coyote at will. Mercy’s next-door neighbor is a werewolf. Her former boss is a gremlin. And she’s fixing a bus for a vampire. This is the world of Mercy Thompson, one that looks a lot like ours but is populated by those things that go bump in the night. And Mercy’s connection to those things is about to get her into some serious hot water..

Mercedes Thompson walks two worlds: one as a first class mechanic (yes…she’s a mechanic named “Mercedes”) while the other is a bit more supernatural.  With her fingers (or paws) in so many ponds, Mercy acts like a liaison between werewolves, vampires, fey, and humans, since she can’t be counted among any of them and can therefore serve as a sort of neutral party.  Unfortunately, aspects of her nature haven’t always had positive results, since she was forced to flee her foster home (and hometown) because of it.

As much as I love Mercy as a character, I hate the world she’s written in. Werewolves are misogynistic as fuck, and along with that comes the internalized type directed at her by the she-wolves due to an aspect of Mercy’s walker nature, which seems unnecessarily catty in complete antithesis to canine traits.  So I don’t blame her for hightailing it out as soon as she could.  She’s constantly talked down to by Adam, her alpha wolf neighbor, and the other males in his pack.  None of the female wolves like her (as fore mentioned) and it just smacks of stereotypical woman-on-woman hate, especially when you find out the reason.  There are also some characters that seem almost throwaway.  Like I completely forgot about Tony until he showed up again at the end.  I was under the impression that he would have a bigger presence (not necessarily a romantic one but something) since he was introduced not long after Mercy was.  Granted this is an extended series, so I’m assuming a lot of these people will reappear, but it seems a bit odd to introduce someone who doesn’t play much of a role in the novel at hand.

Then there’s Samuel, a wolf of Adam’s pack and Mercy’s prior love interest.  He is a complete asshole towards her in the aftermath of his ex literally saving Adam’s life and doing the best she could with the situation she was handed.  But this pales in comparison to the fucked up reason Samuel had any interest in her in the first place.

*spoiler*  Due to the violent nature of transformation and because it’s forced upon the wolves every full moon, it’s impossible for a female werewolf to carry a child to term (they’re also less likely to survive the change because women are “weaker,” something that’s persistently insisted upon).  This means male wolves have to seek non-shapeshifter mates or shapeshifters who aren’t obligated to change, which are rare.  Mercy is one of the latter.  As a walker, her transformation is both voluntary and non-violent.  She just has to slip off her clothes and slip into a different skin.  She could therefore forgo changing for the duration of a pregnancy, which makes her the most desirable female in the area and why all the she-wolves hate her, and it renders her into only desirable breeding stock for the males, which is gross.  *end spoiler* It’s maddeningly misogynistic and a choice Briggs made in her world-crafting.  This isn’t to say I disliked it all, but I abhorred the attitude around and about Mercy, as well as the possessiveness and condescension nearly every werewolf displayed towards her.  She was constantly verbally abused, second guessed, dismissed, and underestimated.

I did think Zee, her gremlin boss, was cool as well as Adam’s daughter Jesse *spoiler* though she winds up a kidnapping victim, *sigh* *end spoiler* but they were among the few.

There’s also this little tidbit thrown out near the middle of the novel:

Perhaps in other ages, in other places, it wouldn’t have mattered that he was gay. But most of the werewolves in power in the US had been born in a time when homosexuality was anathema, even punishable by death in some places.

So werewolves are “naturally” homophobic due to their longevity, which is also an “explanation” for their misogyny.  The change allows them to live a long time, and the mindset of the century one’s born in dies hard, so there’s a reason for their bigotry, but Briggs never does anything to show how fucked up this mentality is.  It’s just accepted like a racist grandpa.

The vampires were stereotypically overdone, and all of the males in the story were essentially vying for who can be the biggest and baddest.  Their possessiveness of Mercy irritated me to no end, which meant *spoiler* I couldn’t feel anything for her date and potential relationship with Adam at the end of the book.  *end spoiler*

I’m still glad I read Moon Called, though for what I call its “opposite effect.”  If I don’t like an aspect of a book, I’ll start thinking about a different way for it to manifest, which gives me my own story ideas.  It also makes me reconsider what I liked/didn’t like, and I did enjoy the idea of werewolves existing in a lush supernatural world (similar to Soulless, which I’m currently reading).  While this is of course not the first novel/series that’s done this (e.g. Anita Blake), it’s still always entertaining to see how all of these distinct characters and “species” interact and an author’s take on them.  Very few novels are a waste of time, since I’m now pondering matriarchal werewolves and vampire royalty.

I’m also not the only blogger who’s reviewed this series.  Cupcakes and Machetes has a much different outlook from me, so you should check her review of Fire Touched (don’t know where that is in the series).  I think she focuses more on how much of a bad ass Mercy is than my nitpicking, and I am going to continue with the series (this is what libraries are for) in the hopes the misogyny and homophobia are eventually dealt with properly as they go along, since I do agree with Mercy’s badassery.