It’s time to throw my hat into the ring and write yet another review of the latest game in Nintendo’s flagship series.  Before I tell you what I think, let’s go through the basics.

Super Mario Odyssey is a 3D platformer crafted in such a way to be very forgiving towards those lacking 3D platformer skills (aka TSN), but this stands to reason since Nintendo has always been a family oriented company, catering its games more towards younger players with an emphasis on fun over challenge.  This is not to say SMO isn’t challenging, but you don’t need to be an expert player to enjoy or even finish the game. There are 880 Power Moons to collect, but you only need 124 (125?) to power up the Odyssey enough to make it to the end.  This sort of tiered difficulty means that more novice players can still say they beat Super Mario Odyssey, while the challenge hounds can rack up the PMs in order to fulfill their competitive needs.

Power Moons are literally just that: moons used to power Cappy’s ship, the Odyssey, which does the game a favor in lending its name to the title.  Shaped like a hat (because what the hell else would an airship used by the people of the Cap Kingdom look like), the ship is initially sitting derelict in the Cascade Kingdom in need of Moons.

It only takes around 10 or so to get the ship moving, but each kingdom is literally saturated with Moons, and you can collect them to your heart’s content.  Every time I fired SMO up, I’d grab at least three (and that’s not including a triple moon), because they’re spread all over every kingdom.  This is why the difficulty level is so variable.  If there was a PM too hard to get, you could always move onto the next one (which I did…often), but if you’re the type who wants a challenge, the game makes it easy to try and try again with only a 10 coin penalty for dying and ample checkpoints.

Mario and Cappy have a lot of moves, but the game comes with a handy-dandy action guide in case you forget exactly how to execute them.  The issue I had with this is some moves were extremely difficult if nigh on impossible to perform unless you separate the joycons.  I like playing my Switch as a handheld with the controllers on the side, so the Cap Spin maneuver was always a crap shoot. 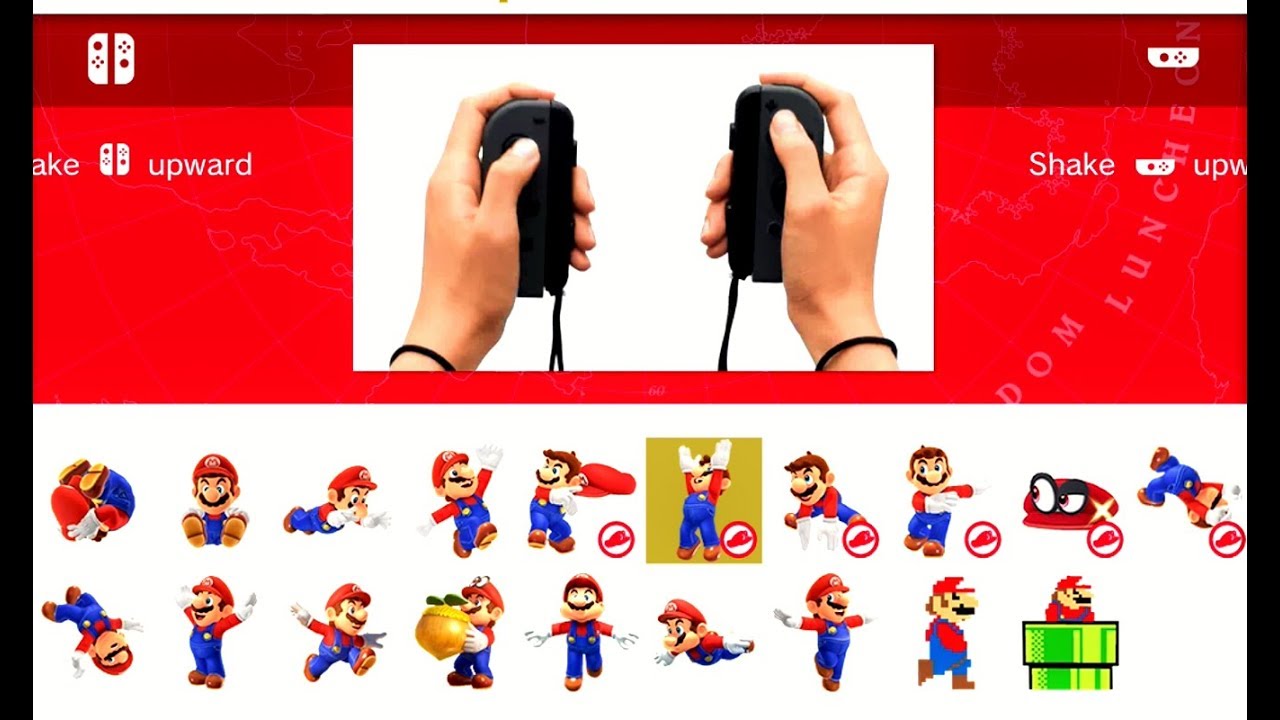 There are quite a few places where you need to throw Cappy in a circle, and it was a bit awkward jerking the Switch around in order to facilitate this.   Tossing him up was another one better served by separating the controllers, and Mario’s rolling ability was yet another.  Of course you could just take off the joycons, but I kind of wish Nintendo had offered some other options.

The Capture ability is what Odyssey is known for, and it expands the game play so much.  Controlling Mario is one thing; controlling another creature Mario currently resides in is another.  Every being you can capture operates differently, and their skills/abilities are often integral to solving a puzzle or moving from place to place.

Some of them (like the Bill above) can only be taken over temporarily for one reason or another.  The Bullet Bill will eventually explode, while others like the T-Rex are just too large for Cappy to manipulate for too long.

There are also characters and creatures that can’t be captured.  Most NPCs wear hats that can’t be knocked off (as opposed to enemy caps), but if you see someone without a hat, that’s a good sign there’s a puzzle leading to a Power Moon.

Even though coins are in abundance and dying only results in the lose of 10, you’ll want to hold onto some since they can actually be used as legitimate money.  One of the other major features of Odyssey is all of the outfits our plucky plumber can purchase.

This is one of my favorites

Some of them are just for show, but many more are used in Power Moon quests like you might have to be dressed a particular way to be granted access to a certain area.  Every kingdom had a puzzle of this type.  There’s also the humorous bonus of Bowser having different dialogue depending on what outfit Mario was in.

Speaking of the King of Evil, that brings me to the…

This is going to be a pretty short section…I mean it’s a Mario game.  What do you think happens? 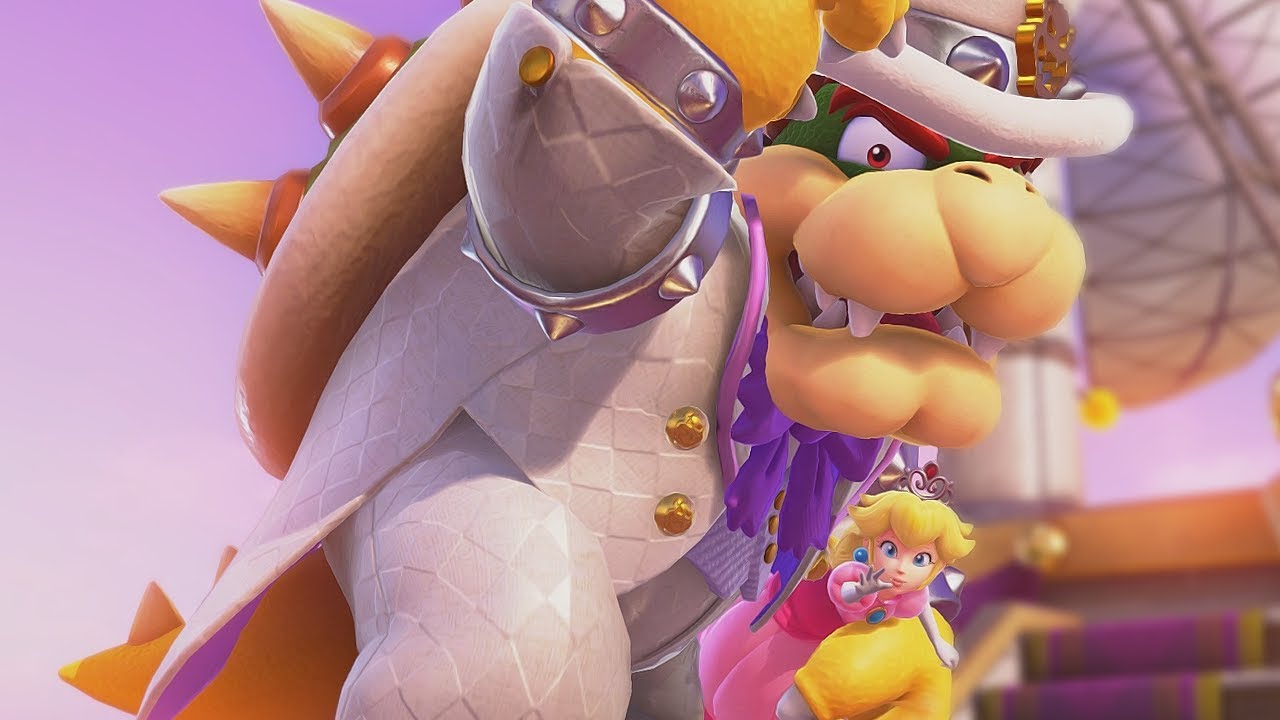 This time around he tries to force her into marrying him, though…I’m pretty sure that’s always been Bowser’s plan.  Each kingdom contains some necessity for the nuptials, starting with the Cap Kingdom and Tiara, Cappy’s sister, and reason the possessive ghost is along for the ride.  As usual, Mario tries to stop the kidnapping Koopa, but he’s knocked off the airship.  Bowser then shreds the plumbers trademark hat,  throwing the pieces down for our defeated hero to mourn.  Not long after, Mario meets up with Cappy who informs him about his sister, and the two decide to team up.  They chase Bowser from kingdom to kingdom as the wannabe bridegroom collects (re: steals) a gigantic ring, a frost frosted cake, carbonated seawater for the champagne toast, and a wedding dress before heading to the literal moon (which has enough atmosphere to breathe) for the ceremony itself.  Also contending with the Broodals, Bowser’s brutish wedding planners, Mario and his new ghost friend try (and obviously fail) to head Bowser off before he ruins more kingdoms and Princess Peach’s life.

I was a little annoyed about the same old story, because the Damsel in Distress trope has been ancient forever, but it’s a Mario game.  It’s no worse than what I expected, so while I won’t give any high marks for the narrative, I’m not going to take any away either.

One thing I will give SMO ultimate credit for is the…

Nintendo sparred no expense with their latest masterpiece’s music.  We were all doing the Odyssey (or at least thinking about it) months before the game was released.

I love how Mayor Pauline has a Jessica Rabbit/Carmen San Diego aesthetic going on.  She’s definitely the kind of lady you’d be more likely to find in jazz bar or lounge than a stuffy old castle.  Not only is this song fantastic, but the Traditional Festival is my absolute favorite part of the game, and the Metro Kingdom is my favorite locale.  I love the music there, too.  It has a metropolis bustle sound to it, which I’m fond of even though I’m forever a ‘burbs girl at heart.

I knew when I heard the music at the Tosterena Ruins in the Sand Kingdom that my ears were in for a treat.

I want to say that Odyssey is the first time Nintendo has utilized vocals in a Mario game (and if I’m wrong, please correct me), and it’s not only the promo song that gets your blood pumping.  At the very end of the game, there’s a mad dash to escape with the appropriate adrenaline fueled anthem.

Nor were they afraid to be a bit jazzy, though that’s never been a problem for the Mario series (re: SMB2’s main theme).  I’d find myself wandering back to the places this played just so I could bop along to the music with Mario (like I’m doing right now).

We’re treated some wintry music (in the proper locale) with its (sleigh) bells, but a bit of a bouncier beat.

And of course you have to have your Indiana Jones-esque, epically adventurous music.

These were just the highlights of my favorites.  Each kingdom has a soundtrack perfectly tailored to its mien.  The Seaside Kingdom has relaxed, resort music; the moon has dreamy, space music; of course the Lake Kingdom is serene, and while the melody of Bowser’s Kingdom would seem odd out of context, it’s perfect for the chosen aesthetic. 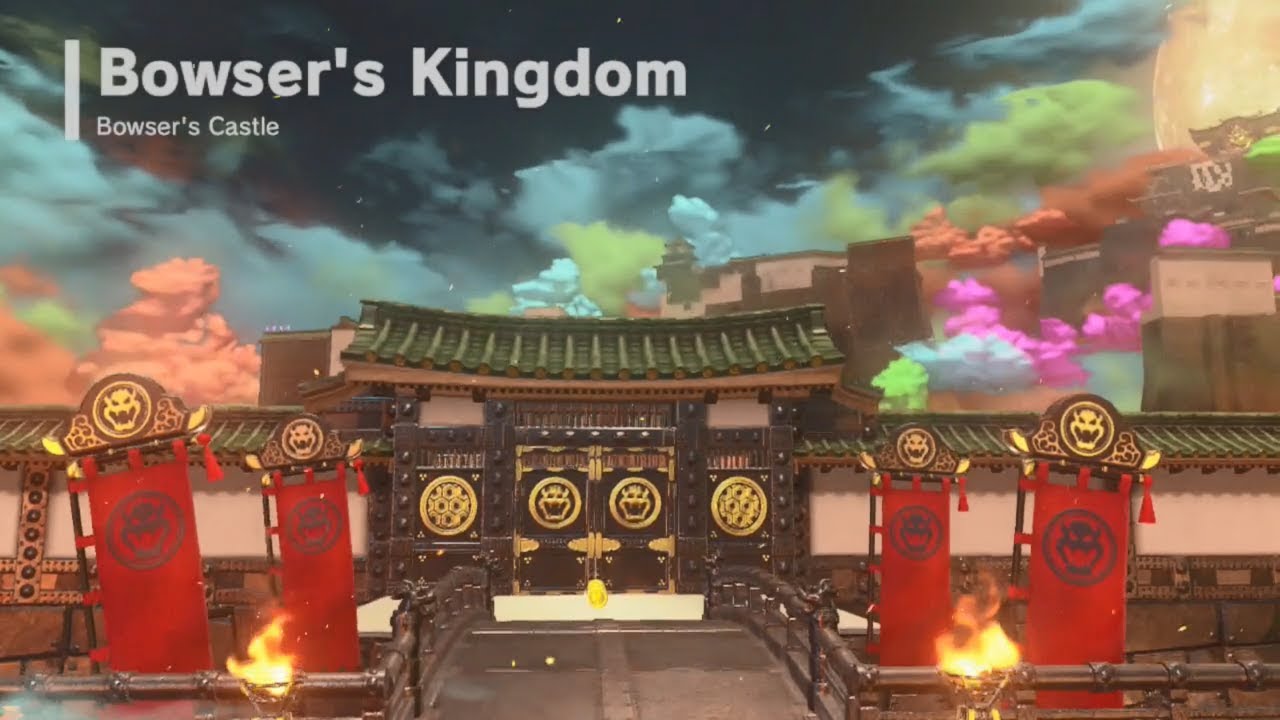 So what’s the verdict?  Well…10 out of 10 of course!  Super Mario Odyssey is a delight to play.  It’s highly enjoyable; only as difficult as you’d like it to be; very engaging; never boring, and a fun romp despite its overused story.  Adding in Cappy unfortunately does little to aid this (since he’s also on a damsel rescue mission), but the hat ghost’s presence more than enhances the gameplay.  Each kingdom is its own charming little world with eclectic residence, and the sheer size of them offers up so many quests it’s impossible to be bored.  If one doesn’t tickle your fancy, there are at least five others to tackle, and if anything is too difficult, there’s surely a much easier Moon elsewhere to obtain.

I’d recommend this game to all gamers, young and old, new and seasoned.

Let me know what you thought of Super Mario Odyssey.  What was your favorite kingdom?  Favorite song?  Favorite quest?  Did you beat the game in its entirety or only battle Bowser to win back Peach?  Let’s discuss in the comments!