TSN is super pissed about Being and Time.  I bought it because Heidegger is referenced in Final Fantasy VII, and you all know I’m interested in studying anything my favorite game references.  The real deal even looks a bit like the character in the game…and he was a Nazi 😡  Granted he’s a dead Nazi (the only decent kind), but I’m still annoyed.  Granted, there’s a good chance none of the money I paid is going to go towards that terrible ideology, but it’s just the icing on the tombstone of this week where I argued with a combination Holocaust denier and flat earther.  Yep, your dear TSN got a two for one on nonsense.

If you want to delve into the machinations of how a cult can draw in and take over “normal” people, this is the book you want to read.  Looking at it from the outside, it’s easy to see what’s going on, but if you really want to believe something because you have nothing else, you will.  That’s how these kinds of people prey on the most vulnerable.  This novel is a disturbing journey, but that’s what makes it worth the read. 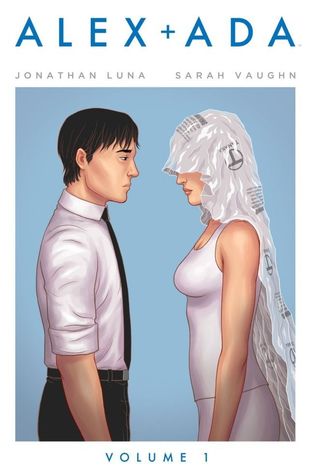 I immediately bought the full collection after I finished this since the library didn’t have any more volumes.  While it’s reminiscent of numerous other stories, there’s something fresh about this take on it that begs to be investigated.

I’m so glad I’m done with this.  It was such a struggle to read the last few chapters, and they were barely worthy my time.  I figured out a major component near the beginning and seeing it come to fruition wasn’t satisfying because of my dislike for the main character.  I’ve said before I can still like if not love a novel even if I figure out what’s going on as long as I enjoy the ride.  That will usually occur if I like the main character.  Harry’s stereotypical sexist behavior just became more and more grating as Fool Moon went along.

I’ve heard from friends the books get much better by the fifth one, so I put the third one on my library list.  At least I won’t have to spend on any more money of these.

I powered through the rest of this yesterday since I knew I was off today.  There’s so much to say about it, I’d be doing Herbert an injustice if I attempted to do so here, so I’ll save it for my review.  I greatly enjoyed it, and I’d recommend it to anyone who loves sci-fi/fantasy since it’s the precursor for many modern works.  Now that I’m finished, I can finally watch the theory videos I’ve been saving.

I remember starting this a while ago, but I think I put it on hold to read something else I was more interested in.  On restarting I recall it has a lot of reference to Norse Mythology: taking place in Midgard and involving the Vanir and Aesir among other things.  The prologue is a good setup, and the novel is high rated, so I’m hoping this time it catches my interest.

I was so excited about this I went to the bookstore a week before it was released.  In my defense, I didn’t know when it was being released.  I’d seen it on Amazon and assumed Barnes & Noble would have it, too.  When I did purchase it, I had to finish Fool Moon before I could start reading (it’s part of my rules).  I can’t wait to really get into this.  It’s the best YA series I’ve read in a long time.  Yes, even better than The Raven Cycle. 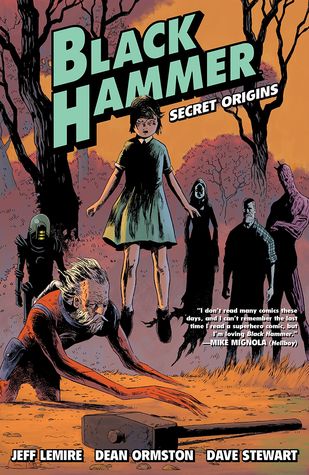 I was into it from the first panel, but I was completely into it when I found out Black Hammer was a black superhero (which is something I should’ve figured out from the get-go, but eh?).  Representation hooray!  There is so much tension in the characters’ dynamic, and that makes for an excellent narrative.

A decade ago, Black Hammer sacrificed himself to save Spiral City in order to also save several other supers who are now trapped in an idyllic, small town that seems beyond the flow of time.  All attempts to escape have failed, and only Abraham, the “father figure” seems content in this life.  Gail is the character I feel the most sorry for.  If I were in her situation, I’d be just as pissed.

I’m now on track with my challenge; 25 finished.  I borrowed quite a few graphic novels/manga from the library, which will really help boost my book count.  I had to return the one for Black Butler, because it was Volume XVI.  It was not well marked on the library website.  I put a request in for the first volume, and I’m this time that’s what I get.  Side note: I did not know Square Enix was the publisher for Black Butler.  There…that’s a thing you also know now if you didn’t.

Today’s the 4th of July everywhere and Independence Day in the states.  For reasons I’m not going to go into but should be fairly obvious from current events, I’m not in the mood to celebrate.  I did some activism stuff earlier today, though I never feel like I’m doing enough.  It’s hard to keep up any semblance of optimism for me in general; it’s even more difficult when things look so bleak.  So…distraction with books, shows, and video games it is!