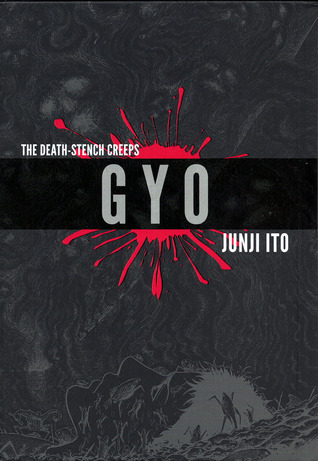 The main characters are the stereotypical teenage couple going on a vacation that ends in horror.  Kaori with her ultra sensitive nose and Tadashi whom we later find out has an eccentric genius uncle Koyanagi they seek out for help when rotting, “undead” marine life floods the shores of Japan.

Gyo is…disturbing to say the least.  While the characters in and of themselves aren’t that interesting (save possibly the eccentric genius uncle), the mystery of the fish, the horrible stench they emit, and the walking machines carrying them is more than enough hold your attention.  When other creatures fall victim to the machines after the marine life eventually rots completely away, the search for a cause and cure to the invasion becomes even more dire.

The volume also contains two unrelated short stories entitled “The Sad Tale of the Principal Post” and “The Enigma of the Amigara Fault.”  Though their plots aren’t related to Gyo (or each other), they have a similar creepiness where the horror’s catalyst is mostly unknown and unexplained.  The first short relates the plight of a father who becomes stuck beneath his house’s foundation.  Then “Enigma,” which is longer, involves the discovery of human shaped holes in a mountain found after an earthquake.  Two hikers wind up at Amigara (which means “empty shell”) and the one becomes obsessed with “finding her hole,” literally the one that has her shape.  It’s a chilling story about what obsession in the face of an unsolvable mystery will lead you to do.