I’ve been following Later Levels for quite some time now, but I’ve never participated in their Question of the Month challenge usually because I couldn’t think of a good answer.  That changed with this month’s spooky query to go along with the Halloween season!

The question set for us by Megan is: In honour of Halloween, tell me what video game scared you the most. What is it about the elements, environments, music, or characters in the video game that scared you?

Without a doubt SOMA. 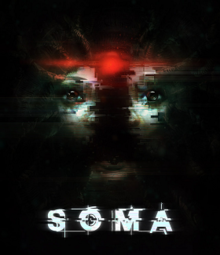 This game messed me up for months after, and I didn’t even play it myself; I watched an LP.  While it has the customary jump scares of most first person survivals, that’s not were the horror lies.  It’s far more existential in nature, and it’s not until you reach the end that the full impact of it hits you like a truck.

It’s set 100 years in the future at the bottom of the ocean in a derelict, undersea research facility.  The world has suffered a catastrophic event where everyone on the surface is presumed to be dead, but in some cases death is far better than the alternative.  The atmosphere of the game does wonders for projected an unnerving and unsettling air as you guide the protagonist Simon through a facility as strange to him as it is to you.

That right there is where I believe the linchpin lies.  Simon is just a regular person just like anyone playing the game, and what happened to him could happen to any of us.  He’s not a space marine, super soldier, scientist, or warrior.  He’s just a regular guy from Toronto with horrible luck.  He didn’t ask to be in that situation, and though it’s utterly outlandish, it’s still not out of the realm of possibility given where technology might go.

Where the story ends is literally gutting and you sit there for minutes after the credits roll and the after credit scene has played as the horrifying realization washes over you.  You remember you were explicitly warned about it around the midpoint of the game just like Simon was, and a terrible decision you need to make as him suddenly takes on a deeper meaning.  Yet it’s not until the end that you understand the implications.  It’s an experience I’m never going to forget and that I’m still working on reviewing.

So that’s my scariest game!  Check out Later Level’s post linked above if you want to get in on the spooky action 🙂