I know it’s not Sephiroth’s hand she’s holding in this picture (not nearly big enough haha), but it’s still a black leather covered one with wrist guards and we’ll just go with it.  I added in the cute nail painting scene I wanted and ran through a first edit of it yesterday.  I’m still in the first edit overall so I may change some things when I go through again, but it’s going, and that’s what matters.

I recorded the first part of Chapter 1 with no problem, and I did a recording of the second part on Friday (after some sweet, sweet, Mario Kart racing with Livid Lightning).  I loved the way it sounded when I did it, but noticed the waveform was really small.  I figured I could amplify it later, but even doing so it’s still not the same quality as the first.  I can’t amplify it more without distorting it so I’ll have to do another recording on Tuesday, making sure it’s the same quality as the first.  I was hoping to be editing the audio this week, but such is life! 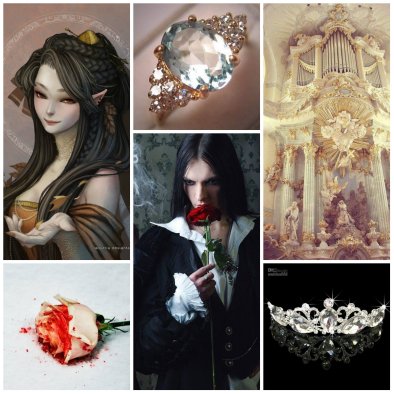 I decided to put this story on hold until I can figure out how to start it.  Last year I wrote the main character walking through the halls carrying books on her way to read to orphans.  She was thinking about her current life since tomorrow she’d meet the titular character’s emissary and in a year leave her home, but…it was boring AF.  I couldn’t be bothered to read back through most of it, and that told me I needed to do something different.  I want to have her out and about in the town where I could have the reminisces interspersed between interesting things instead of her just walking through empty hallways.  I need to envision it before I write it though, so I’m going to wait until that happens.  I’m kind of salty though because I can’t stop thinking about later scenes in the book that I really want to get to, but I’m a stubborn cow (Taurus) who needs to do things in a certain order.

Anyway, it’s not like I don’t have enough to work on with The Broken Rose and Northern Lights audio plus a slew of other stories in planning.  Next year I want to rework my first original novel and maybe look into publishing my short story.  Fun fun research times!

What might happen with this novel is I’ll watch, read, or play something that gives me a good starting idea like what happened with Les Miserable (2012) and Northern Lights.  This is why it’s always good to consume other creator’s works.

Progress is slooooooow, but it’s the holidays so eh.  I need to bake all of the things.  I made some Amish Cinnamon Bread this weekend and it pretty much tastes like coffee cake, but not as processed as the Tastycake ones you buy (I think that’s who makes them).  It was really easy to do.

I still need to figure out what the hell I’m getting my husband for Christmas.  That dude already got an iWatch for his birthday in October.  I don’t know what the hell else he’s expecting :p

Update: I got him an SNES Classic.  He loves it.  It’s the European model, but it’ll work here in the good ole US of A.

What do I usually say in these ending things?  I’m completely out of it.  I went to a Christmas party yesterday, and though I didn’t even drink I feel hungover today.  It was a lot of socializing and emotional stuff going on, so I’m exhausted.  I slept until three and when I got up my knees told me the weather had changed.  You know how I know I’m an adult?  That and I was excited to get a box of underwear hahahaha *cries*

What mundane thing reminds you about your adulthood?  Also conversely, what’s one “childish” thing you still do?  For the latter I’m literally sitting around in a Doctor Who Tardis onesie #noshame