Still haven’t gotten a chance to play this, but I did check the strat guide I’m following again to see what prep I have to do.

The next time someone complains about the FFVII Remake being episodic, I shall tell them about Golden Sun, which came out in 2001 and is broken into three parts.  Granted, I know Squeenix is milking the cash cow, but there’s at least a precedent for JRPGs to do it (also FFXIII so that settles that).  It was a kind of risky move for Camelot Software Planning, too.  I don’t know much of their history, but I don’t think they’re that much of a big name (or they weren’t much back then.  Correct me if I’m wrong!), so they put quite a lot of eggs into three baskets in the hopes that the trio would be sold.  I’m loving these games (already watching the second one, which I’ll talk about below).  I was expecting this to be similar to Final Fantasy where each game has its own internal story arc (I have a lot to say about the overarching themes and archetypes of FF, but that’s a hefty essay/essays), but Golden Sun appears to encompass one main plot split into three games.  I’m going to assume they did well since all three exist, and the games are excellent.  The ending is very much a cliffhanger, and I’m glad Oliz already has all of them completed.

I just saw the last episode go up today.  Time to take care of Dark Adder!

The first Golden Sun ends on a cliff as fore mentioned with the second picking up slightly before that with other characters.  You find out what happened to your friends (and some enemies) as the narrative follows them attempting to fulfill contentious tasks and make fantastic discoveries.  I was wondering how the game was going to wrap up all of the plot points it opened, and now I have my answer.

Jenna, Kraden, and Felix (who is now the silent protagonist) travel the world of Weyard, meeting all different types of people and cultures in their quest for Lemuria.  This game is significantly longer than the first one, taking over 80 videos to Golden Sun’s 40+. I didn’t get to play Mario Kart with Lightning these past two weeks.  I worked late the one Friday and I *think* she had to go somewhere the next.  It’s alright, there’s plenty of time for us to get our race on.  I really wish Nintendo would get their shit together and have a way for players to, you know, communicate with each other instead of having to use an outside service, but you know the Big N: they’re great at ideas, but not so stellar at execution.

How did you spend your New Year?  I stayed home because we had no plans, and the hubby was sick anyway.  Not that I need an excuse not to go anywhere.  I had a little champagne when midnight struck then went back to editing.  I’m old and boring *shrug*

What are your gaming plans for the New Year?  Do you have a challenge you want to complete or a particular game you want to play/finish?  My goal is to finish FFVI, write my review of it and finish FFVII.  I don’t know if I’ll finish reviewing it by the end of the year (it took me almost six months to write the review of FFV yeesh…), but I can at least complete the game.  I also want to clear some of the smaller games off my backlog, so I’ll have to do some organizing and planing for that (mah favorite things!).

I hope you all have a glorious New Year.  2019 is my year to chill and be unbothered. 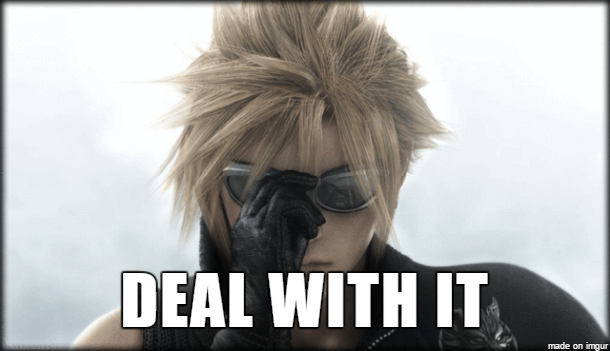