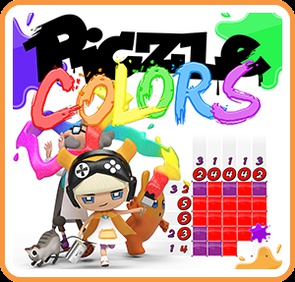 Piczle Colors is a puzzle game in the Piczle franchise that includes Piczle Lines and the update to that Piczle DX.  PC is a type of nonogram in the similar vein to Picross i.e. a picture logic puzzle in which cells in a grid must be colored or left blank in order to reveal a hidden image.  In the case of Piczle Colors, all the cells are filled with a particular color based on number clues in the the rows and columns.

The logic of the game is simple in theory but becomes complex in action.  Each row and column contain clues to help the player figure out how they should be filled in.  A number in a circle indicates that that particular color will be consecutive, so if we take the first column from the left, we know there will be three whites in a row.  A number that has no circle with not be consecutive.  Examining the same column once more, we know that blue will not fill up six adjacent spaces, and there must be another color in between to break it up.  If the player doesn’t put three whites in a row or does put six blues, an X will appear to indicate it’s not filled out correctly.

There were 300 puzzles at initial release and the developer just added 40 more that were part of one larger picture instead of individual ones.  They also included a way to skip the title screen, but they haven’t yet updated menu navigation, which comes off a bit dated.

You have to meticulously scroll through before clicking on arrows at opposite ends of the screen, as opposed to using one of the buttons to back out.

Another issue revolves around colors being either be too close to the background or another color, which can make for some confusion.  It’s possible to change the backdrop, and the colors are always in a particular order; however it can become frustrating, especially if you’re trying to best your last time and pick the wrong one.  The later pictures with more dimensions do come out looking more complex, but the developers could’ve explored options to forestall situations where colors are close in hue.

The initial puzzles are 5×5 then 5×10’s (and the inverse) are introduced before moving onto 10×10 and finally 15×10 puzzles with up to four colors.  There’s the option to do a randomly selected puzzle of the 300 or even an utterly random configuration using the player’s choice of 2-4 colors and any of the dimensions. This is by far the most difficult mode to play in as even 5×5 puzzles can be nigh on insurmountable with or without the optional clue.  The request for a clue can be turned on or off at your leisure or decided on an individual puzzle basis.  The game randomly selects a row and a column, filling out all of the cells there.

Between release date and current, 40 more puzzles were added that were part of one larger picture, and hopefully there will be more updates soon.  Despite its foibles, Piczle Colors is both entertaining and challenging.  It fosters logical thinking, and there’s a legitimate sense of accomplishment when a particularly difficult puzzle is completed.  Often I wasn’t certain or even concerned with what the picture was until I finished, and it’s never a bad thing to become totally engrossed in a game.

Note:  Just a quick reminder: I use the 5 star method for games.