Well I have a new fandom.  I am ready to drop SO much money on this.  I just bought two manga volumes and I’m already looking for an Edgeworth mug.  Of course I intend to review.  I’ll probably do it when I’ve played them all.  I’m already backlogged with reviews (who’s surprised…), so I’ll probably be finished by the time I’d even get to this one. 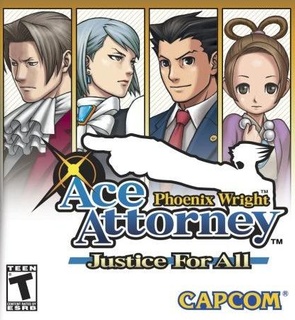 Phoenix has to contend with a prosecutor even more cut throat than Edgeworth: Franziska von Karma, the daughter of Manfred von Karma, who was Edgeworth’s mentor. 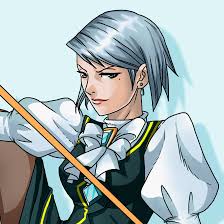 You’d all probably laugh uproariously at my attempt to do her with a German accent (she’s from Germany…at least in the game).  I feel like I sound more French lol.  What I love about this game is the (recurring) characters are anything but shallow.  You think Franziska is just out for perfection…which, yeah, she is, but you find out some interesting tidbits about her by the end.  I seriously can’t wait until I finish all the games, watch the anime, and read all the manga so I can dive headfirst into the world of fanfiction.  I’m already sort of concocting one in my head as we speak ♥ 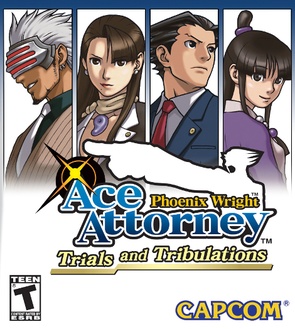 This game goes back in time to Mia Fey’s second trial experience.  Mia is not only Phoenix’s late boss (not a spoiler, since she’s dead in the first game), but she knew him even before he became a lawyer.  My AA friend informed me this is the game with the caffeine addict prosecutor.  I just hope Edgeworth makes an appearance ♥

I literally can’t deal with the internet right now

I finished up Vector and am currently in Thamasa ready to go check out the caverns in my search for the Espers.  This is such an interesting part of the game, because the Emperor and Kefka pull a Game of Thrones (Seasons 1-4) level maneuver with a false armistice.  It’s not something I ever realized playing the game as a child, but in jailing Kefka, Gestahl manages to convince the Returners he really wants peace but that the Espers went too far.  It’s…pretty gaslighting tbh because it’s Vector that initiated aggression in the first place.  Using Terra (AGAIN) to talk to them because she’s half-and-half is a cunning move on their part.  Only Gestahl and Kefka were even part of the plan since Leo was blindsided, which create yet another characters fans were clamoring to resurrect.  I would love to get back to my novelization of FFVI one day, especially now that I have read politically intriguing stories like ASOIAF.  It would be really fun to stretch my wings with those kinds of paradigms.

I just saw the explanation of what’s happened to turn everything into…well, the Wild, and I’m here for it.  This game is beautiful, and I thought it would be weird to watch an open world Zelda, but it really isn’t. Like Zelda already has an open world feel to it to begin with, so it’s not that big of a leap.  Granted I’ve only watched five videos out of over 120 so I don’t know if my opinion will change, but so far I’m loving this.  I do own it, but I haven’t had time to play it myself.  Not to mention I don’t think I’m not very good at these types of games, so an Olizandri Let’s Play it is!

I still haven’t had the chance to test out my streaming capabilities.  Hopefully, this weekend will prove lucrative.  Now I’m going to finish up a few things and then play more Phoenix Wright 🙂