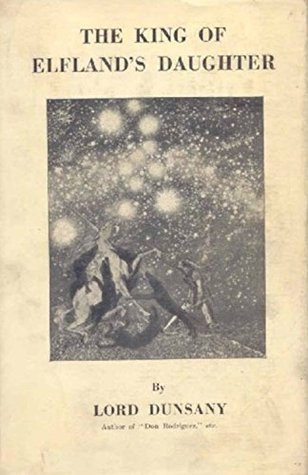 The poetic style and sweeping grandeur of The King of Elfland’s Daughter has made it one of the most beloved fantasy novels of our time, a masterpiece that influenced some of the greatest contemporary fantasists. The heartbreaking story of a marriage between a mortal man and an elf princess is a masterful tapestry of the fairy tale following the “happily ever after.”

Edward John Moreton Drax Plunkett, 18th Baron of Dunsany was considered one of the greatest writers in the English speaking world during the 1910’s.  More than 90 of his works were published in his lifetime, but today he’s best known for The King of Elfland’s Daughter, a novel that explores life after the “happily ever after.”

The lord of Erl is told by a parliament of his people that they want to be ruled by a magic lord so that their land could go down in history, so the lord sends his son Alveric to fetch the titular fairy princess, Lirazel, who goes with him willingly.  As time passes slower in in the fey lands than they do in the real world, Alveric returns many years later to discover he has inherited the lordship after his father’s death.  Alveric and Lirazel have a son, Orion, and Lirazel tries to adapt to a mundane life, while still keeping some of her fae traditions.  Alveric; however, discourages this and admonishes her for her “un-Christian” ways.  He tries to make her less fae and more like the court ladies, but she is what she is.  Eventually, Lirazel uses the rune her father gave her, returning to him in Elfland.  Lovesick Alveric goes after her, leaving their son to be raised by his witch nursemaid.  Abandoning his kingdom for the hopeless quest, Alveric is eventually betrayed by his own men who hold him hostage and keep him from Elfland out of their own jealousy.  Meanwhile, Lirazel becomes lonesome for her mortal husband and son, and, seeing she’s unhappy, the king of Elfland uses up the rest of his runes to engulf the land of Erl, transforming it into a part of Elfland and bringing about half the wishes of the old men who wanted Erl to have a magic lord, but as the land passed out of the human history due to this act, no one in the mundane world would ever remember it or know.

This was…interesting, oddly interesting though the writing was so dry and plodding (a common “complaint” of classics).  You are still drawn into how it all will end.  Will Alveric find Elfland?  Will Orion heed the call of its horns?  Will Lirazel return of her own accord?  The story is a literal classic “Be careful what you wish for” tale with the elders of Erl wishing for a magic lord so that Erl would be remembered for its greatness, but in obtaining their desire, they lost what they hoped to gain from it.  Erl passed out of all living memory in its absorption by Elfland.  To this end, as well, all of the years of Alveric’s searching are washed away as Elfland finds him instead of the inverse.

The King of Elfland’s Daughter was incredibly hard to read at times.  If Soulless was endowed with dry humor, this novel was just dry.  The text functions more as poetry in the language used, as well as in how it repeats.  Dunsany frequently mentions “the fields we know” and “the fields we don’t know” to reference earth and Elfland respectively.  It’s not annoying, but the prose has a winding way about it that can be hard to follow if you’re not paying attention.  The value of this novel comes more from the foundation it laid in showing the modern subversion “happily ever after” is older than I thought.  The happy ending occurs in the first two chapters where the rest of the book is dedicated to the aftermath.  It’s the difference between conquering a kingdom and ruling one, which is not my most feminist metaphor, but it serves to show how enamoring a princess isn’t the same as maintaining a relationship.  Since this was published in 1924, over a decade before Disney’s release of Snow White (1938), Elfland proves that subversion of fairy tale tropes predates the mouse’s co-opting of them.

This is worth exploring for the sake of education, research, or posterity, but I wouldn’t recommend it to the casual reader.