I receive a whole hell of lot of these for someone who hates sunlight :p

This time I was nominated by Extra Life Reviews who does just that.  He gives out extra lives and reviews.  Wait…maybe it’s just that his reviews give extra life to all those who read them.  You won’t know which one it is unless you check his blog out, now will you?  I always appreciate every nomination I receive, and I can only apologize for how long it’s taken me to get to this one.  So without further ado, here are the questions I was asked to answer.

1. In which cases would you deem the manga superior to the anime on which it’s based?

Hm, I’ve fallen quite far behind in my anime viewing, not for lack of desire, just lack of time.  It’s been a while since I’ve watched any, and lining up something that I’ve both watched the anime of and read the manga is a bit difficult.  I’ll say that the Chobits manga was more detailed than I remember the anime being (though I watched it a long time ago), although there were things in both media representations that were way ickier to my more 2019 sensibilities.

2. Which game do you feel has the best soundtrack?

Omg don’t do this to me.  There are way too many choices out there.  If you know me, you know I’d have to pick one of the Final Fantasies, and I believe I’ve already decided that Final Fantasy IV has the best soundtrack in terms of overall quality.  There are songs I like better on other OSTs, but nearly every song in IV is excellent.  For non-Final Fantasy (you evil, evil thing)…I literally can’t decide so I’m just going to throw some great ones out there.

3. If you could revive a dead video games series, which one would you choose?

Golden Sun.  I only watched Let’s Plays of it and never played it myself, but I’d like to see another in the series.  While the third wasn’t nearly as good as the first two, I think a lot of that had to do with the marked differences in gameplay.  Also Dark Dawn was only the first half of a story just like the first Golden Sun, so…Camelot Software Planning maybe should’ve planned better.

4. What game/film/album/book did you have a particularly difficult time adding to your collection?

It took me quite a long time to find a copy of Susan Kay’s Phantom until sometime last year because it was out of print for so long. 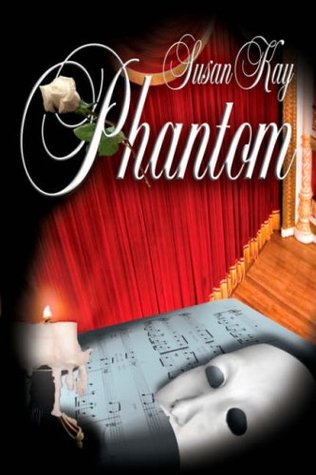 It’s a retelling of the famous Phantom of the Opera originally by Gaston Leroux (which I’ve read and have a LOT to say about), but for a while any copies were wildly expensive.  I was finally able to pick one up last year along with Leroux’s original novel.

5. Do you prefer to see a film at home or in the theaters?

It depends on the film.  Certain films I like to see in the theater.  Even though I hate people, I love gatherings where everyone is on the same page and hype about the same thing.  The experience of seeing Avengers: Endgame is not something I’d trade, because everyone there was of a similar mind.  We all yelled, laughed, cried, and cheered at the same moments.  There’s just something about being amongst strangers yet feelings so connected to that portion of humanity.  You know that you could strike up a conversation about the experience with any of them, and their energy would feed your energy and inverse.  It’s magical.

6. In what cases did you find yourself siding with critics over fans about a work’s quality?

I’ll have to answer this with some caveats, because while critics are generally considered “experts,” their opinion is still not entirely objective, and a work can be considered “low quality,” yet still give enjoyment.  That being said Twilight and Fifty Shades of Grey.  I’ve curbed a lot of my more virulent critiques over the years, but that doesn’t mean there aren’t valid criticisms of these works (e.g. promoting abusive relationships), but the enjoyment of them by certain demographics is fraught with so many nuances that not only reflect what we are as a society, but also show how such novels came to be written and popular in the first place.  As someone who participates in what’s often considered frivolous, i.e. both writing and reading fanfiction, I have to recognize this and even call out my past self for her classist behavior.

7. In what cases did you find yourself siding with fans over critics about a work’s quality?

I honestly can’t think of an answer to this one, lol.  To be fair, I don’t read or listen to a lot of professional critics, and tbh you could be both a critic and a fan.  I guess this will be one I don’t really answer.

8. What is the most difficult game you’ve completed?

It had to be something I played when I was younger, because current TSN doesn’t play difficult games lol.  I did beat Super Mario World’s Rainbow Road back in the day, but that’s a difficult part and not such much a difficult game.  The Adventures of Lolo 3 was pretty damn hard in terms of puzzlers, and I believe I beat that with no guide, because they didn’t exist back then.  I guess we’ll go with that unless I think of something else.

9. Which game series have you been following for the longest amount of time?

Probably Super Mario, but I’d also have to say Final Fantasy and Legend of Zelda.

10. In what ways do you feel video game critics to be ahead of their film-loving counterparts?

They’re way less dismissive.  There are still film critics out there (albeit older ones) who don’t think video games are a viable medium for critique, clearly forgetting that all narratives are worthy of discourse. I also think that game critics have to contend with more moving parts.  For example if you’re discussing a narrative based game, you not only have to look at the narrative, you also have to look at the gameplay and how that connects (or doesn’t) to the story that’s being told.  Since games are an interactive medium, you are a part of it even if you’re just playing a role or along for the ride.  You are controlling at least one character, and this made a monumental difference in games like The Last of Us and Shadow of the Colossus.  With the former, it left many players in a state of disgust for what they were forced to do as Joel at the end, and with Shadow, the realization of who/what you are is all the more jarring when you realize all you’ve done to get there.  Even in older games like Final Fantasy VII, which are literally role-playing, you’re controlling Cloud at one point as he slaps/beats up Aeris and later as he struggles not to kill her.  Even though you’re not that character, you’re pressing the buttons and controlling the uncontrollable action at that moment.  I could wax philosophical about free will, but I don’t want this to be a dissertation.  Even though all narratives at least attempt to give the viewer a point of view to cling to, video games more readily force you into the pilot seat through interaction.

11. How does hype factor into how you ultimately feel about a work?

Hm, this is a complicated question because it depends on the work; it depends on any preconceived notions I already had about the work; and it depends on my mental state at any given time.  I have depression and anxiety, and one of my coping mechanisms with the latter is to not get excited about things, because it inevitably leads to disappointment.  So something like the FFVII Remake initially caused the excitement that produced bittersweet tears, but then as I found out more, the disappointment sunk in.  I was upset it wasn’t going to be turn based, and I also worried Squeenix would do too many changes to the story in order to appeal to a modern audience.  I went through a non-caring phase about it, ignoring any news (though that’s kind of hard when you’re known as the FFVII lady and people will just send you shit lol), but eventually, I got to a point where I was meh.  I’m looking forward to playing it, but I’m not really looking at it as “my” FFVII.  I’d hoped for a remake with the updated graphics we’ve been shown and no story changes.

So I guess what I’m saying is I tend to not react as positively to hype on certain things, but if it’s something I’ve just gotten into then I’m more prone to it.  It really depends.  I was ultra hype for Avengers: Endgame, and I was not disappointed. ♥

Okay, well that’s it.  Feel free to do it if you want to!  I’m too tired to think up new questions, so just answer the ones I did.  TTYL!