Behold my absolute laziness as I just use the second basket picture for this week.  BEHOLD IT.  I found this one and last week’s months ago for this chapter and figured I’d just roll with it.  I’m not going to use the for the chapter pic, but they’re good for this status post.  I’m more than halfway through the second edit of Chapter 17, and it’s going well.  I don’t think I’ll need a third, so should be able to post as soon as I’m done.  Side note, but I’ve noticed my stories have been getting more kudos and comments on AO3 since the Remake release date announcement et al.  It’s a sensible correlation.  I, myself, have been more active on tumblr, though I’m still pissed at what they did with NSFW stuff and how that apparently fucked up my blog even though I had nothing that was NSFW.  My picture and background are not only gone, but trying to restore them doesn’t work 😡  I’ll hopefully figure it out eventually, but I’m irritated.

“General, c-can you put me down so I can see better, p-please?”

As easy as placing a doll in a house, Sephiroth did as she bid, but she kept his angelic face in her sight, captured as all was forgotten.

“Am I what you wish to peruse, little flower?”  He tried to pull mirth, but it waned.  “You can look at me whenever you wish.”

“I can never look enough.”

GUESS WHAT????  I have to do MORE re-recordings!

The worst part is some of these are things I’ve re-recorded before, but I didn’t like the way they sounded.  Others are due to Audacity deleting my shit.  I thought it was only going to be the first part since I did re-name a file, but NOPE, the third part is missing like 267 files or something like that.  I’ll need to look at it and see what I can salvage before I do anything.  I did manage to go through all the other parts though, and what I like I really like, but others just need some work.  Because I love you all, I want to give you the best before I summon a meteor and destroy the world, so I’m going to try to make this as perfect as possible.

I did receive a compliment on my blurb video in that the person listening asked who I’d gotten to do the reading.  Just me, bitch!  I later did an INFJ door slam on him because he pissed me off about something else.  When I’m being serious about shit, I’m being serious about shit.  Maybe I’ll remove him from TSN jail at some point in the future, but for right now, I’m not really pressed or impressed for that matter.

Because I am really proud of these, here’s the Northern Lights blurb again:

No source on this one

Am I really doing this?  Yes.  Yes, I am.  Nor is that question just about the fact that I’m working on yet another writing project, but also what that project is about, which I’m not ready to talk about yet *cackles uncontrollably and blushes like a banshee*  Yeah…I’d say this is a crack ship, but can you really call it a crack ship when it has a shit ton of followers?  Yes.  Yes you can.  I got swept up into the tide of it as I normally do.  I saw something (or someone) that piqued my interest in Olizandri’s Let’s Play and I thought, “Huh, I have…weird feelings about this character.  What is going on?  I’m just gonna slide up into google and get more information about them.”

Whelp, now I stan.  This is one of the reasons I’ve been more active on tumblr as I mentioned above, but again…I’m not ready to talk about it.  I’m just gonna write my thing…probably poorly in terms of getting all the lore right, since I HAVEN’T EVEN FINISHED WATCHING THE GAME, but hopefully I’ll be forgiven.  Lord help me…I hope I am forgiven for so many things.

I’ve said it before, and I’ll say it again.  I do something different with everything I write.  Oh, I definitely have a formula: the bigger and stronger protective character, the physically weaker one who has an even greater non or extra physical strength, hurt/comfort, SO MUCH FLUFF, the protector going the fuck off and killing someone/something or a whole lot of someones/somethings, forgiveness and redemption, one or both of them feeling unworthy of love, lovely size kink (I found out this was a thing and what it’s called even though I’ve been using it for years AHHHH), BUT I always end up doing something I’ve never done before, and this story is no different.  And that’s where I’ll leave it 😉

*laughs maniacally*  What even is life?  What is TIME?  What do they even MATTER.  I AM ABOVE THEM ALL *lightning strikes the World Tree and the ensuing conflagration burns down the Nine Realms*

I missed this story terribly.  It’s all I could think about, and I decided I’d continue working on the background mechanisms of it aka the planning and organization, taking little notes, writing snippets of description/dialogue.  When I saw a promotion for this program called Camp Fire (hah, camp fire), a story organizer, I downloaded it for the express purpose of THA.  I’m not going to purchase it because it’s not really striking my fancy, but I made an effort.  I feel much less stressed about this because I love planning things and working out details so that when I am ready to write it it’ll go much smoother.

I finally ran out of the one medicine a terrible doctor prescribed for me.  It was Cymbalta (duloxetine), and it…worked?  Kinda?  It made me less anxious (kinda?), but I was apathetic AF (I called it “the melancholia”) like full on nihilistic (it’s why I changed my name on Twitter to The Compassionate Nihilist followed by a shruggy).  Not that I’m not a touch nihilistic.  Nothing matters in the very long scheme of things, and none of us will be memories when the universe inevitably ends, 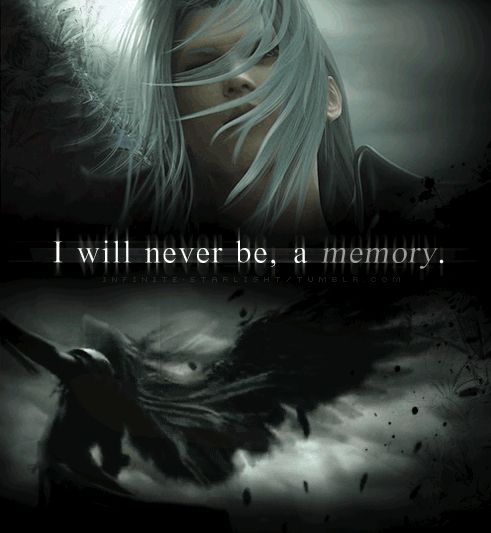 NONE of us will be memories, you sad, wrathful, beautiful angel. Not even Zack whose name MEANS “memory.” DO YOU NOT SEE THE TRAGIC IRONY OF THIS???

but I didn’t need my brain to remind me of this all the goddamn time.  I’d told my PCP (haha, PCP is another name for angel dust lolsob) I wanted to switch back to Lexapro (escitolopram) because I wanted to be able to take Evekoe (amphetamine sulfate)

in order to combat my narcolepsy, and apparently duloxotine and Evekeo don’t mix.  ANYWAY, I figured “Why waste drugs?” so I finished up the duo and then switched to Lexapro about a week ago.  I have more brain energy per se, I’m really into big band music now (been listening to “Moon River” almost non-stop for the past few days), I want to go to karaoke (which to be fair, I’ve been wanting for a while), and dance.  Mentally, I’m…different and kind of weird.  I don’t really GAF about what people think/say about my likes/fandoms, so I’ve been posting random shit on Facebook where while before I might not have cared on duo, I also didn’t see why I’d bother to post anyway.  Lex is more “Guuuurrrl, say yo thing!” and I do.  Another reason I revived tumblr, because some stuff is just better suited for there.

Side effects though?  I’m even more allergic to the sun.  I swear to god my skin is trying to crawl off and I’m thinking of using my parasol.  I have an appointment this Tuesday about it, though it started before I switched to Lexapro.  I think it began as an allergic reaction to something, which has been exacerbated by the medication and the sun.  I’ve had dermatological reactions that have lasted for months though (Neutragena caused my face to break out for half a year.  No, I’m not exaggerating.  I wish I were), and I just want the itching to stop.  It doesn’t help that my wedding rings are stuck on my fat ass finger, and they contain nickel because white gold has nickel in it, and I’m very allergic to nickel.  As long as the rings are cleaned and coated, it’s fine, but I’ve gone way over my time with it…because I can’t get them off.  At this point, I may just have to have them cut off and, er, cut my losses to get the bands mended.  Yes.  I am the princess in “The Princess and the Pea.”

That’s enough of my random life.  How are your projects going at this half year point?